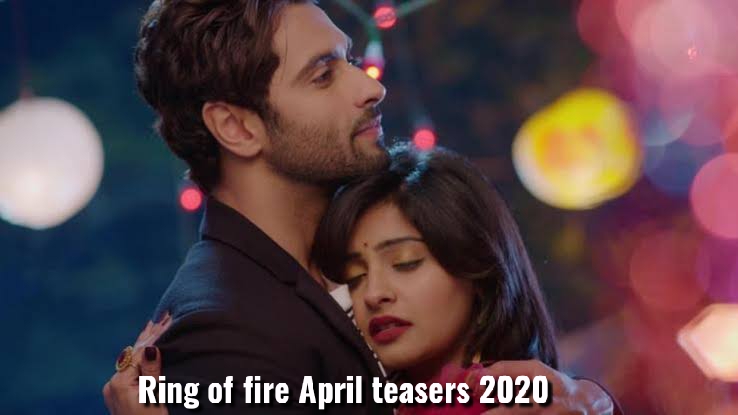 Ring of fire April teasers 2020: Anurag has lost his memory and remembers only Ragini, Court orders Shruti to live 6 months with Vishu before their divorce, can they finally learn to put aside their differences?

Revati tells Ragini and her parents that she forcefully got Anurag married to their daughter and it is better the relationship ends. Anurag calls Ragini. She rushes in with whole family but Anurag doesn’t recognize them as he has lost his memory.

Anurag tells doctor that he does not know anyone except Ragini, he knows only her name. Ragini says she is his wife Ragini. Doctor requests that she tells him things so he can remember. Meanwhile Shruti prepares to leave her in-laws but Purshotam informs Revati that according to court orders, Vishu and Shristi have to spend 6 months together before seeking divorce.  Vishu promises to  become better in 6 months. Revathi thinks 6 months are nothing, Shristi has to go at any cost.

Anurag is discharged from hospital, ragini portrays a happy marriage in her narrative: Ragini says their nature is similar, they sleep and wake up at same time, she sleeps with lights off and even he does. His father came with alliance and her father accepted it. She loves him and he loves her even more. He asks how did he injure. She reminisces Shekhar shooting her, but says he has a lot of enemies in his job.

At home Ragini keeps lying to Anurag about their happy marriage before his memory loss. However Anurag keeps up the questions. Also Shristi prays to Ganeshji to fulfill Vishu’s dreams and her promise of living with him..

Revati brings home a fake baba to try separate vishu and Shruti. The baba orders Vishu to stay away from his wife for 30 days. Vishu tells Shristi that he cannot deny Baba’s order and Shruti tells him to be careful as she does not believe in superstitious.

In the middle of the night Anurag get a bit of his memory. Later that morning the contractor comes to cancel his contract with Anurag but Shruti, Ragini and Vishu take charge and work as partners to see the project a success.

Ragini looks at Anurag and thinks once his memory is back, she will return to her home. Anurag asks if something is wrong with Vishu. Ragini says he is a bit slow, but is very fast in technology, can repair any machines, fans, etc. Anurag asks why did Shristi marry him, they don’t match. She says they both love each other.

Vishu walks blindfold around the house as per Baba’s order: he says Gandhari blindfolded herself for her husband in mahabharath, he will blindfold for Shristi and says Revathi that babaji’s promise will not break. Revathi says he is right and asks Dulari to take him in and feed badam halwa. Revathi yells at Shristi that because of her, Vishu is walking blindfolded. Shristi says she blindfolded her son for her benefit.

Dulari brainwashes Revathi that Shristi and Vishu are getting closer to each other. Revathi yells she should separate them. Anurag hears their conversation and thinks this woman calls herself as his and Vishu’s mother, then why she wants to separate husband and wife, if she is their stepmother.

Anurag feels severe headache and collapses. Revathi sees that and blames Ragini and yells to spare Anurag and go away from him. Shristi informs family that Anurag’s memory is back but only temporarily.

Ragini tells Shristi whatever she told misterji/Anurag, she does not think he believed it. Revathi’s fake baba tells Vishu that he sees Vishu made a sin of seeing his wife directly. Vishu says only once. Baba says he has a solution and increases havan fire. Vishu gets afraid.

Shristi says she will tell and says baba is fake and his assistant mixed something in ash. Assistant denies, but agrees when Shristi threatens to call police and says he mixed sandalwood and camphor in ash. Revathi changes tone and scolds baba to get out. Brij pays baba and warns not to open up, else he will be punished.

Brij says Ragini is not her problem, Shristi is as she is very intelligent. Revathi yells she kept Ragini here thinking Anurag get well, but he is not, so she will kick Ragini and Shristi out somehow. Anurag hears that and angrily throws havan fire and other items. Revathi hears that and runs out of room towards him. Whole family gathers Anurag says whoever she is stay away from her. Revathi says she is his mother. He says she cannot be his and Vishu’s mother as he heard her telling she wants to kick out Ragini and Shristi.

Shristit tells Vishu that she and Ragini are going to meet union leader. He asks if he can accompany. She says it is a secret mission and he should keep it a secret. Ragini points gun into union leader’s mouth and warns that she is Vikral’s daughter Ragini Singh and is stil same, if he lets workers work, she will spare him, else he will shoot her. Anurag comes there. Shristi manipulates the situation and Anurag praises them and says he will withdraw money from bank tomorrow.

Vishu returns from work and insists to help Shristi. Revathi yells she is forcing her son to work. Shristi gives money back to Vishu and asks to keep it safely. Dulari notices money bag.

Daaadi calls Shristi and Ragini and says she had a dream of gifting bangles to her Anurag and Vishu’s wives. Dulari says let us start with Shrisit. Revathi fumes in jealousy Daadi gives bangle to Shristi and then ragini. Ragini says she cannot take it as she is not capable of wearing it for now. She walks away. Shristi follows her and asks why she di not accept bangle. Ragini says she has a lot of bangles. Shristi says she is hiding something. Ragini says Anurag does not remember their fights as he lost memory, once he gets back memory, he wll fight again. Shristi asks her not to stop living today worrying for future.

Shristi asks Vishu to bring bag. He brings. Ragini holds bag and says some money missing. Anurag checks money and says 50,000 Rs are missing from 5 lakhs. Dulari gets nervous. Vishu says he kept money bag and did not even open it. Revathi says she knows Vishu is innocent, so Shristi has stolen money. Vidhvan warns her to stop alleging Shristi. Ragini says someone from family has stolen it. Revathi continues alleging Shristi.

Dulari is caught and she pleads with Revathi not to send her out of house. Revathi says she cannot, what was the need for stealing. Dulari says she stole it for her, thinking she can trap Shristi, but herself got trapped. Revathi asks why did not she tell before, she would have done something, now she will go and convince Vidhvan and Dulari should apologize.

Dulari decides to revenge on Shruti for exposing her: Shristi is in kitchen. Dulari informs that her brother Sumer has come. Shristi walks out. Dulari switches on gas thinking of taking revenge from Shristi and sprays room freshener around. Sumer apologizes Shristi and requests her to talk to their father once. She says she is busy. Dulari thinks both sister and brother will die. Shristi tries to light matchstick, but it does not.

Official teasers to be replaced…