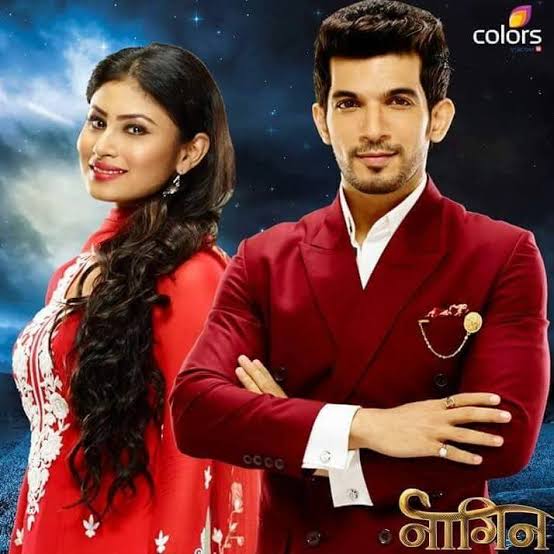 Naagin is a series on Tv3 exploring a supernatural theme. It is about snake shape shifting women who seek revenge for past sins committed. In all 4 seasons, these serpent women fight evil and keep the ultimate source of power, the ‘naagmani’, safe from evil. Naagin is produced by Ekta Kapoor under Belaji Telefilms.

Shivanya and her cousin Shesha are ichchadhari naagins (shape-shifting serpent-women) who seek to avenge the murders of Shivanya’s parents in a failed attempt to obtain the Naagmani, a magical gem. Shivanya marries the murderer Ankush’s son, Ritik, and kills his accomplices Viren, Shailesh and Suri. Shivanya falls in love with kind-hearted Ritik, giving Shesha concerns about her commitment and risking the loss of her powers.

Ankush’s wife Yamini is the final murderer, who learns Shesha’s nature and turns her against Shivanya. Yamini frames Shivanya for Ankush’s murder so that Ritik swears vengeance against her. Though Ritik’s feelings are conflicted, Yamini helps him kill Shivanya with a magical knife. She also kills Ritik for trying to return naagmani.

Shivanya and Ritik are revived by Lord Shiva. Learning the truth, Ritik helps Shivanya protect the Naagmani. Though she loses her powers, they succeed and kill Yamini. Shesha is imprisoned by the Mahishmatis (shape-shifting bees) who were behind the plot, attempting to obtain the Naagmani every 25 years.

Twenty-five years later, widowed Shivanya has an adult daughter, Shivangi. Shesha, Yamini and the Mahishmatis return, and Yamani’s nephew Rocky falls in love with Shivangi. Shivanya quickly arranges their marriage so that her daughter can avoid the hardships of becoming a naagin. On the wedding day, the evildoers kill the wedding guests and fatally stab Shivanya, blaming it on bandits.

Shivangi escapes the slaughter and survives a suicide attempt to become a naagin, vowing to protect Naagmani and avenge her mother. Shivangi interrupts Rocky and Shesha’s wedding a few days later, and Yamini makes Rocky to marry Shivangi, as she is the only one who can touch Naagmani. Later, Shivangi is saved from one of Shivanya’s murderers by Rocky, and she realizes that he is innocent. Shivangi kills the other murderers and avenges for a naag (male serpent) who was killed while assisting her. Rocky learns her identity and that she killed his family; he seduced her so that she loses her naagin powers.Then he made her imprisoned.

Following months of imprisonment, Shivangi realizes that her naagin powers are stronger than ever. She escapes and learns more about her and Rocky’s families, and how they had been manipulated. Shesha and Yamini cause Rocky to become a naag. Another naag helps reveal the truth to Rocky, but when Rocky and Shivangi reunite to fulfill her revenge, Rocky suddenly stabs Shivangi to death – apparently under orders from Ritik.

Icchadari Naag and Naagin Vikrant and Ruhi reunite as lovers after hundred years. However, business tycoon, Andy Sehgal’s son Yuvraj along with his friends come to the Haveli where Ruhi and Vikrant are going to be married. They attempt to rape her and while saving her, Vikrant gets killed by Aditya (Yuvraj’s friend) who shots him. However, Mahir Sehgal (Andy Sehgal’s eldest son) reaches there and snatches the gun, thus making Ruhi suspect him of the murder. Ruhi is distraught and swears vengeance on the murderers.

Six months later, Yuvraj Sehgal is engaged to a well-to-do woman Bela. A naagin infiltrates the Sehgal home as a sassy, seductive and multi-rich investor named Vish Khanna. Vish kills Karan on the night of her arrival. She kills Yuvraj on the day of his marriage. Meanwhile, the eldest son of Andy Sehgal, Mahir, marries Bela. Bela is revealed to be Ruhi who has transformed into Bela after her face was ruined and to complete her revenge while Vish is revealed to be her closest friend and a royal servant. Bela and Vish kills Rehan together.

Bela and Mahir starts getting close which creates an unwillingness in Bela’s mind to kill Mahir. On Bela’s way comes a witch. Bela starts falling in love with Mahir. They all visits a town where Bela plans to kill Aditya who had known of her true identity. She confronts “Stree”[disambiguation needed] but manages to kill Daksh. Bela and Mahir kiss each other at the town. Vikrant returns and it is revealed that he had faked his death in a plot to obtain the Naagmani. Andy Sehgal’s wife Sumitra had also been killed and replaced by Sumitra, a naagin from the Nidhog-nag clan who is Vikrant’s mother. Learning of the plans, Bela made Vikrant to marry Vish, and he decides to help them. Mahir loses his memory when Sumitra bites him and doesn’t remember Bela. Bela tries to make Mahir remember everything with Vish and Vikrant’s help However, on the day of New Year, Bela, Vikrant, Vishaka along with the Naag Rani Maa (Bela’s mother) are killed by Sumitra who pushes them down from the hills.

Another Six months later, Sumitra arranges Mahir’s next marriage, with a bridal party massacre. Sumitra’s sister, Rohini and brother-in-law Alekh comes to live with her. However, the bride is revealed to be Bela in disguise, accompanied by Vikrant and Vish. Sumitra takes help from Huzoor. Bela now confronts Hukum and Huzoor who are revealed to be demons. Huzoor is former Ruhi’s disguise while Hukum hides his face. Bela and Vikrant makes Huzoor to reveal everything about their plans. Hukum is killed by Huzoor after she reveals their plans while Bela comes to know of Huzoor’s evil plans who wants to give birth to Andhkasur (a demon child) through Bela. However, Vish takes Bela’s identity and gets pregnant by Hukum. Vish gives birth to Hukum’s daughter Taamsi who becomes evil as she grows up. Taamsi eventually kills Huzoor while declaring that nobody can control her. Bela and Mahir are later killed by Taamsi. Sumitra obtains Naagmani but it loses all its powers, as it was cursed by Shivangi. Bela and Mahir are reborn as Shravani and Mihir.

On her twenty-fifth birthday, Shravani gains naagin powers and memories of her past life, and reunites with Vikrant and Vish. Sumitra and Taamsi attempt to remove the curse from Naagmani, but Shravani summons Shivangi (blessed by Lord Shiva) to protect it. Shivangi restores the Naagmani’s powers. Shesha is revealed to have killed Shivangi in the form of Ritik and Rocky. Shesha reveals that she was a part of the Ku-Sarp clan and was a two-headed naagin. Shesha and Shivangi fight, ending with Shesha buried in the ground. Rocky and Ritik are freed from a basement, and Shivanya is summoned from heaven; as Ritik dies, he and Shivanya are permanently reunited. Shivangi and Rocky start a new life together. While Shravani is marrying Mihir, Taamsi, Shesha and Sumitra appears and asks for Naagmani. However, Shravani who is mow blessed with more powers, refuses and announces that Naagmani woukd be safe for the next 50 full moons after that day. She takes them to the Naagin haveli and kills the 3 of them with Lord Shiva trident. Shravani marries Mihir. At the end it is revealed that Vish was also a Ku-Sarp serpent and she was eyeing Naagmani from the beginning. She vows to take the Naagmani after 50 full moons.

A naagin princess Manyata marries a human Keshav. She give birth to a female child who can’t become naagin until the age twenty-five. Later, Keshav gets massacred along with his family. Manyata raises her daughter Nayantara to exact revenge on the Parikh family.

Nayantara waits to get naagin powers at her 25th birthday. However, the powers go to Brinda instead, who is later revealed to have been switched at birth with Nayantara. Meanwhile Dev, the son of murderer Vrushali, falls in love with Brinda. Manyata and Brinda are reunited and Brinda marries Dev to take revenge.

Vish returns from 3rd season with the motive of getting naagmani and plans to get it by Nayantara. However, her plan fails because instead of Nayantara, Dev touches naagmani accidentally and gets it in his forehead. Disappointedly, Vish scolds Nayantara and makes her vanish in a pillar, thus killing her. Meanwhile, Brinda starts her revenge by killing Madhav. Now Vish has to kill Dev to get the Naagmani. She decides to separate the couple and starts creating misunderstandings between the couple. When Brinda realises her motives, Vish decides to kill her mother abd put the blame on Dev. She takes the form of Dev and kills Manyata in front of Brinda while making Brinda think that it was Dev who killed her mother. Brinda vows to complete her revenge by killing Dev and his family. On the other hand, Vish returns to the Parekh family and announces that Brinda has escaped with Rajat. The show takes a leap of 1 year after which Vish released Nayantara and she gains a new face and identity called ‘Shalaka’. Dev and Shalaka were married on holi day, elsewhere Brinda was ready to take Revenge.