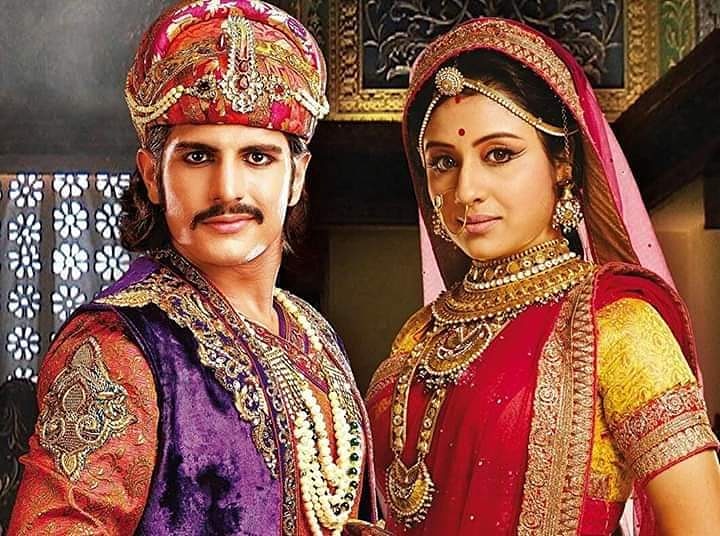 Jalah break ties with his sister Baksi poisoning Jodha thereby making her lose her pregnancy. Jodha try to plead in her behalf but Jahal won’t listen. Jodha told Jala h that is punishment to the sister is too serve and need to be revised. Everyone is preparing for Jahal birthday.

Ruk plan a birthday surprise clue for Jahal. Jodha took Jahal to the village to see how his people are fairing in an ordinary man clothes. Ruk surprise Jalal with a costly dress for his birthday but Jahal chose Jodha gift over hers which make her furious and Promise to deal with Jodha. She confronted Jahal if he’s falling in with Jodha

June 3
Jodha caught Adham misbehaving with a servant. Maham is angry at Jalah for not consulting with her before appointing ministers. Adham try to assault Tasnim again but Jodha stop him. Adham lied to love Tasnim as par maham plan. Everyone is shock to hear this from him. Tasnim agree to marry Adham due to her parent influence. Jahal thought to stop child marriage.

June 4
Adham told Jahal he must divorce Ruk he he wasn’t to stop child marriage. Maham tries to make Ruks believe Jodha is taking her position. Ruk pick a fight with Jodha. Jahal divorce Ruks, Maham and Adham are happy while Ruks is devasted and Promise to make life miserable for Jalal and Jodha.

June 5
Jodha plan with Jahal and Ruk to reveal Adham intention to the Villagers. Everyone is furious with Adham. Jahal relieve Adham of all his position and cancel the divorce. Ruks reconcile with Jodha after Jahal explain everything to her. Maham voes to punish Jodha for making her son suffer.

June 7
Jodha try to speak with Jahal as regard the incident but he walked her out oh his presence. jahal try to make Jodha jealous by getting close to Benazir. Maham pretend to cry in order to make Jahal Grant her access to see Adham. Benazir comfront Jodha while Maham try to make Jodha look bad before Jahal.

June 8
Benazir jumped into the lake to get Jahal’s attention when he was with Jodha. Jahal try to humiliate Jodha at the Meena Bazar by not allowing her to present her ware but declare Benazir winner. Hamida shocked all when she announce Jodha ware as the best and gifted her a necklace. All are shocked.
Manan plan with Benazir to humiliate Jodha the more using the right between her and haha. .

June 9
Jodha try to apologise to Jahal but he taunt her subtly. Benazir vows to win Jahal hearrabs he is using her to get to Jodha. Jahal plead with Jodha to make medicine for sick Benazir. Salima advice Jodha to try and understand Jahal and make peace.
Benazir poison a soldier. She suck tke venom of a snake to feel better. Everyone think the soldier was killed by a snake not knowing it’s Benazir who gave the snake Poison.

A strange solider imitaz challenge Jahal to fight. Jodha warn him to be careful but he turn deaf hear to her. Imitaz defeat two soliders and Maham convince Jahal to release Adham as he’s the only one who can defeat imitaz. Jahal reinstate Adham in his position after defeating imitaz. Sharif write to Jodha to meet her

June 11
Sharif inform Jodha about Benazir true Identity which made Jodha ponder why he choose to give the information to her. Mirza inform Jahal about the a letter he got from the Poison solider room and ask Jahal to enquire about Benazir. Benazir fooled Jahal inot believing her lies. Adham organise a dance party for Jahal.

June 12
Benazir seduce Jahal who started romancing her as he was seeing Jodha in her and suddenly pushed her away. Benazir is furious that her plan to kill Jahal has once failed. Shivani plan to run away with tej after Mirza ask for her hand in marriage. Maham forces Shivani to accept Mirza marriage proposal while Jahal and Jodha continue there couple fight.

June 13
Maham plan to use Shivani relationship make Jahal throw Jodha out of the palace. Ruk challenge Jahal of accepting Jodha sister and to marry Mirza without informing her. She thought if Jodha is truly trying to take her position. Mirza invite Shivani to meet tej and invite him to his nikkah with Shivani. Shivani run away with tej

June 14
Maham annd Ruk inform everyone Shivani run away bring shame to them. Jahal is furious with Jodha. He jailed Jodha father but Mirza ask for him to be released. Jodha met with Sharif who inform her about Benazir plot. Jahal send Mirza to war against Hamida’s wish.

June 15
Jodha confronted Benazir and she thought to kill her first before Jahal. Mali is captured and while Jodha try to inform Jahal about Benazir true intentions, he kept ignoring her. Jodha caught Benazir and found out she is a poisonous woman planning to kill Jahal she tried to inform Jahal but Ruk stop her. Benazir is true in the court. She also try to escape with zakira.

Benazir is attack in the market by the people. Ruk suggest Jahal marry her as Jodha has tarnished her image and he accepted. Jodha meet Sharif for assistance in how to stop Benazir while Salima agree to help Jodha stop Benazir. Jodha save Jahal from Benazir’s bite. She also had a confirmation with Benazir who told her she can’t do anything to stop her as Jahal doesn’t believe her.

Benazir disguise to as a servant to leave the palace, Salima and Jodha followed her only to find out the river she jumped into to the beaten up in the market is poisoned. Samlima is happy with the evidence. Adham lied to saved Benazir when asked to investigate her. He also ask her to kill Jahal as he’s with her. Begum perform mendi ceremony for Benazir.

Jahal is worried about not have anyone to fully trust and hamida advice himyo look into his heart. Adham hope Jalal gets kill so he will become king. Jodha is confuse in how to save Jahal. Benazir bites a sweet and have to Jahal but Jodha took it and and became unconscious due to Poison. Benazir escape using Ruk when are Identity was reveal. Jahal regret not believing Jodha as she struggles for her life.

June 19
Ruk throw Benazir inside the poison river. Jahal pray to kahna to save Jodha as she about to die. Everyone is worried about Jodha. Jahal pray for Jodha not to die as she struggle with her life, she moved her hand. Jodha recovered and Jahal is grateful for everyone prayer. Moti updated Jodha about everything that happened while she was unconscious.

June 19
Ruk throw Benazir inside the poison river. Jahal pray to kahna to save Jodha as she about to die. Everyone is worried about Jodha. Jahal pray for Jodha not to die as she struggle with her life, she moved her hand. Jodha recovered and Jahal is grateful for everyone prayer. Moti updated Jodha about everything that happened while she was unconscious.

June 20
Jahal gets close with Jodha making Ruk jealous. Mirza is back after winning the war.
Jahal went to dargah alone with Jodha which anger Ruks so much after Maham made her believe Jodha is trying to take her position as Jahal favorite begum. Jahal who has disguise as a common to dargah is thrown into jail with Jodha as he refuse to road fee.

June 21
Jahal is about to be beaten for refusing to pay road fee but Jodha saved himby paying with her jewelry. Jahal met Todal who offered them a place to rest formtheir journey. Ruk went to meet Jahal and Jodha as she couldn’t bear the thought of both of them together aone. She made Jodha sleep in the open air while she shares the tent with Jahal.

June 22
Jahal reconcile with Baksi as the family celebrate her for her pregnancy though she not happy as her husband is still in jail. Jodha ask Jahal to release Sharif as a gift to Baksi fo her baby shower. Jahal set Sharif free to the surprise of everyone. Sharif keep lusting after Jodha. Sharif meet with Mali and plan to kill Jahal.

June 23
Maham lied to Jahal that Jodha want to go on a boat with instead of Ruk inorder to make Ruk hate Jodha. Ruk find Jodha with Jahal which angers her. Ruk drags Jodha to Jahal to know why he spend the night with Jodha instead of her. Maham continually instigate Ruk against Jodha as Jodha gains love of the harem.

June 24
All Begums complain to Jahal about Ruk harsh behavior towards them and ask that he replace Jodha as the head wife. Ruks disrespect Salima. Jodha save a slave boy. Sujamal (Jodha brother) kill Jahal’s soliders and Jahal Promise to punish him with Jodha support.