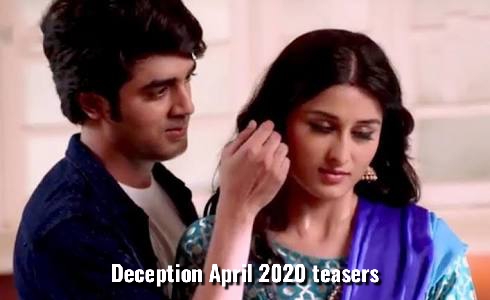 Deception April teasers 2020: Pooja is faking her madness to hide a truth that could destroy the vyas mansion forever What happens when the truth about Narens true parents is revealed…

Supriya asks naren to break his relations with Pooja. Naren announces to his family that he will take Pooja away so he can find solution for her mental state. At night without any one notice mayank sneaks Pooja out and Naren makes good his plans. On their way a clown comes and distracts Pooja. Everyone in the house is looking for them.

Pooja causes commotion in the bus and Naren almost lands in trouble with the travelers. Naina arrives at the vyas mansion and hashes a plan to get herself accepted. Rahul aware of their escape calls Mr Kapoor who plans to kidnap Pooja all over again. Also Pooja manages to convince Naren to wear female clothing for the day.

Pooja wants to see more magic tricks, she has no idea the magician is just a fantasy. A well kept secret is revealed.

Rahul is still determined to pursue the couple further. The doctor is trying to scam Naren and Neelima, and it is almost working.

Pooja and Naren get a visit from an old grandfather. What secret does he have for them?

Pooja and grandfather find the control room and try to delete the video from the hospital showing when he told Pooja about the family’s secret, Just before Mr Kapoor shows it to Naren.

Naina is the only one that is not fooled by Pooja’s mental illness act. She plans to tell Naren all about it.

Mr Kapoor gets Naren beaten up badly so Pooja can return to him but Pooja is able to save him. Later he is kidnapped again and Mr Kapoor threatens to tell him the truth about his parent unless Pooja does as he says.

The priest sends a very strong message about Naren not being the heir: Supriya is looking for a new wife for Naren,she visits a priest who tells her the truth about her past: Supriya shows Naren’s kundali to Pandit ji. Pandit ji says according to your kundali, Naren is not your first child as your first child was dead at the time of birth.

Naren comes to face with the truth of his past.

Naren’s mother is acting as if she is also Pooja’s mother to spend more time with her son.

Naren is running for elections and Pooja has to pretends that they are still happily married so Naren can receive more votes.

Rahul is forced to marry Neina.

Neina has hired professional actors to act like her family at the Vya’s mention, this is part of her plan to inherit some of the Vya’s riches.

Pooja has been kidnapped, grandfather is the only one that is worried.

The love hate relationship between Pooja and Naren continues.

Naren’s plan to kill Pooja happens succesfully, but love has him rushing back to where it all happnend to stry save her.

Supriya can walk and Pooja is very suspicious with all that connections around the house.

Naren has no idead that the man he trusts with his work at this point is the the one that is planning to kill him.

The love between Naren and Poojs keeps growing and Pooja and her family welcome him once again with love, except for Anja.

Naren is making headlines with the rally and the Vya’s family is very proud of him.

Today Neine and Rahul are getting married and Pooja is refusing to be part of the celebration seeing that she knows his intentions.

Pooja finds pregnant Surbhi where she has been held hostage this whole time.

Naren tried to find out from the thugs who killed Mayank who hired them and why they did it.

Pooja disguises as Nenie’s Dr in order to catch that she’s lying about her pregnancy, but Neine is 10 steps ahead of her and removes her mask.

Pooja goes to the river and decides to end her own life.

Naren is giving Pravin’s heart and now they have to stay with his evil wife to console her.

Bela is introduced to the Vya’s family but not everyone seems to be welcoming.

Bela is trying to kill Naren all because he is using her late husbands heart and for years his been abusing her.

The police call at the hotel Naren and Pooja lodged in and they jump through the window. Pooja who is unaware of the danger is all joyful. At the vyas mansion, Supriya is angry with Naren for his deeds and neelima uses the opportunity to instigates Supriya against Pooja. She says we know that they are husband and wife, but how can we forget about Kusum and Doctor’s words, and says your daughter in-law kid can be mad. She says if Naren becomes mad taking care of his mad wife. Also Rahul is still determined to pursue the couple further.

Pooja and Naren get attacked by goons in their journey and Pooja fights back. She also reveals that she is not truly insane! Pooja is back to acting insane but there’s a reason for it: Pooja thinks it is good that naren is not taking her to doctor and says if he had taken her there then she couldn’t fulfill the promise given to someone, and says if this secret comes out then many lives will be ruined and thinks to convince Naren to go back to hrishikesh. Naina finally gets Pooja’s location from Mayank.

The doctor deceives Naren to part with lots of money despite knowing Pooja is not really mad. But Pooja returns and retrieves his money. The fake doctor along with his companion have wine and tells him that he didn’t see fool like Naren who gave him 5 lakhs cheque. Pooja comes there and hits him. She says what did you tell Naren that I will be fine and says you tried to deceive him. She ties him and gets the cheque and says because of you, people thinks doctors are deceptive.

Surbhi and Neelima are deceiving the family with a fake pregnancy. Pooja doesn’t know how to tells Naren the truth about his grandfather being alive and visiting her in the hospital after she got hit by the Bell.

The secret Pooja is hiding is revealed: a flashback is shown when Supriya comes to the ashram and gives birth to baby, but the baby was not breathing and her baby was swapped to Naren. Pooja thinks I have to act as mad to fulfill grandfather’s promise

A devasted Naren falls Ill thinking that he wasn’t able to cure Pooja’s madness. Pooja tries all to make him fine. It is revealed that Mr. Kapoor knows the truth about Naren not being a vyas and had asked Pooja to fake madness so that Naren can leave her and he would marry her.

Mr Kapoor has kidnapped Naren’s grandfather and threatens to kill him if Pooja doesn’t return to him, Pooja is determined to end his madness. Later Naina meets up with Naren and tells him her identity. He wonders why Pooja kept the secret from him.

Mr Kapoor gets Naren beaten up badly so Pooja can return to him but Pooja is able to save him. Later he is kidnapped again and Mr Kapoor threatens to tell him the truth about his parent unless Pooja does as he says.

Supriya is looking for a new wife for Naren,she visits a priest who tells her the truth about her past: Supriya shows Naren’s kundali to Pandit ji. Pandit ji says according to your kundali, Naren is not your first child as your first child was dead at the time of birth. Supriya is shocked.

Naren manages to free Pooja from Mr Kapoor but he is one step ahead as he detonates the bomb where the grandfather is kept and promises to detonate the ones planted at the vyas mansion. Later Mr Kapoor poisons Naren drink but he is unaware that Pooja had poisoned his own drink. Finally Mr Kapoor dies but not before he informs the police that Pooja is responsible.

Naren gets consciousness and recalls Mr. Kapoor forcibly dancing with Pooja. Pooja gives her statement to Inspector that she killed Mr. Kapoor and is ready to sign the confession papers. Inspector asks why? Pooja recalls the truth and says she don’t want to say. When she is about to sign on the papers, Naren comes and stops Pooja, tells Inspector that her mental state is not good. Naren is able to free Pooja from the police grasp. But another secret awaits them as they make their way back to the vyas mansion.