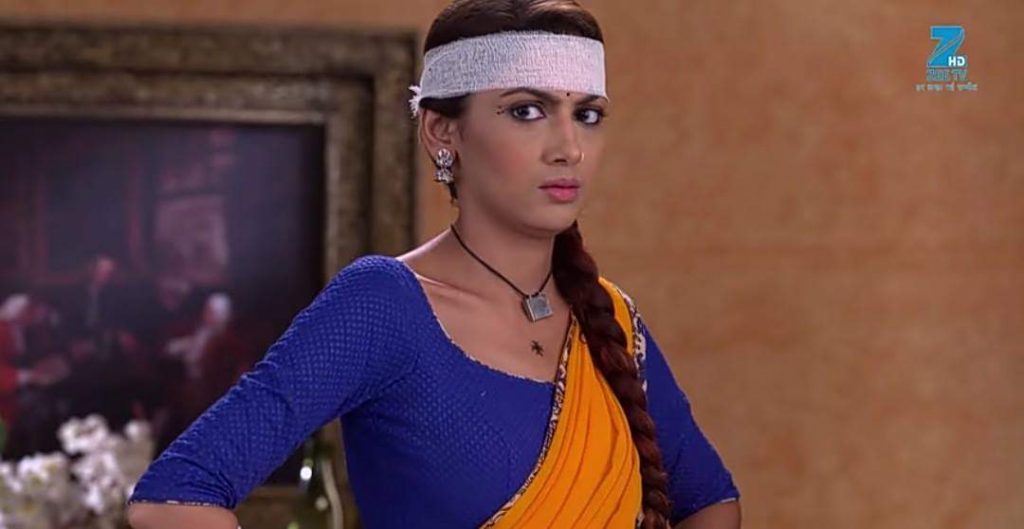 Dadi asks Mitali to wake up early morning and do all the arrangements for Puja. Mitali thinks how to escape.. Dadi asks her to do so else she will make her do Aaliya and Tanu’s work. Mitali says she will do.

Dadi smiles and asks her to tell Pummy to make Prasad for puja. Purab is in the car with a goon looking driver, and thinks he has Abhi’s money with him. He chains the money suitcase and ties to his hands. He hears the  goon receive a call where he says he is reaching there in 2 mins.

Purab asks him whose call it was? Goon says it was his wife’s call and she is quite troublesome. Purab says you should be happy thinking someone is there for you. Goon asks why did he tie his hand with chain. Purab says for security. Goon Lakhwinder thinks how he will secure the case without hand. He stops the car and tells Purab that they’ve arrived the bank.

Purab gets down infront of bank, and calls Mr. Khandelval. Other goons are waiting for him. Purab asks Lakhwinder to go. Main goon asks other goon to snatch bag from him. He says it is tied to his hand. Main goon says I want it anyhow. Goons beat Purab  and ask to give bag. Purab says he will not give his brother’s money.

They take out the sword asking him to leave bag else they will cut his hand. Just then a girl throws brick on the main’s goon hand and head. She shouts at goons.

Purab looks at her. She calls Police and asks him to come before she hits more bricks on the goons. Main goon asks his goons to catch the girl. The girl beats them with rod. Main goon gets angry and holds the rod. Girl asks them to leave the man (Purab) and says if you let him go then I will let you go.

Main goon/boss asks if she is a teacher.. He takes out knife. Girl says she will hit him hard. Boss moves and she hits Purab mistakenly. He gets badly injured and gets unconscious. Police comes there. Boss says you didn’t know that we are Sangram Singh Chautala’s men. Girl asks him to tell Sangram Singh to do good work. The goons run away.

The girl tries to wake up Purab. She makes him sit and sprays cold drink on his face. Purab gains consciousness and asks about his bag. She says goons had not taken it. Girl says she didn’t let them steal his bag and introduces herself as Disha. She asks why did he risk his life for money as she gives him the bag.

Tanu tells Aaliya that it seems Munni is double crossing them and may be she is Pragya and not Munni. She says may be she returned to take revenge from us. Aaliya tells her that may be she staged the drama, but how did she learn to walk on rope, and from where did the kids come in her life. Tanu says she is not convinced.

Tanu tells Aaliya that may be she is Pragya and that’s why she forced Abhi to agree. She is convinced. Aaliya says if she refuses to sit for puja then she is Munni else Pragya. She says we will ask her to refuse, once she refuses, everyone will hate her.

Disha asks Purab why did he risk his life for money. Purab says that money was of his friend. Disha tells him that the goons were of Sangram Singh Chautala, who is Corporator’s brother and very influential. She says you have done panga with them. Purab says I don’t know them and asks why did she interfere when she knows them. She tells that her father tells that she often tears her dupatta while saving others dupatta.

Purab says he don’t forget teacher’s teaching and says his Di is also
a teacher and she has set a guy right. Disha asks with whom he is close too. Purab says Pragya di. She says she got late to go to school. She asks him to get his bandage done, asks him to drink haldi milk, and also get money deposited in bank.

Purab says ji teacher ji. Disha asks him to go before Sangram Singh comes. Her purse falls down. Purab sees make up stuff and asks if she teaches students or do make up. She says it is for her marriage which is tomorrow. He congratulates her. He picks the bangles and reminisces Bulbul. She says she will leave. Purab smiles. She leaves.

Aaliya and Tanu come to Munni and see her applying powder on her face. Aaliya asks what you are doing? Munni says she is doing aarti and very soon, they will get Prasad. She says can’t you see that I am doing make up. Tanu says why did you make up your face. Munni says she wants to see what is the difference between me and the plastic doll. Tanu gets angry. Aaliya asks Tanu to calm down and asks Munni if she knows about the Pooja.

Munni says she knows about the Pooja and says she has convinced Abhi. Tanu tells her that this puja can’t be done alone. Munni says anybody can do puja. Aaliya says she is talking about Satyanarayana Puja and says only husband and wife can do this puja.

Munni is shocked and says she can’t sit with Abhi and says it will be a betrayal to Abhi and her would be husband. Tanu says if I sit with Abhi in the puja then Abhi will marry me some day. Munni asks Aaliya to make her sit. Aaliya says this can’t happen, and asks Munni to sit in the puja.

Aaliya says we are not asking you to romance with Bhai, and gets an idea. She says we have brought her here so that family members hate Pragya, says they shall make start with tomorrow’s puja. Tanu smiles.

Disha asks students to do their homework. Aarav gives her lollypop and goes. She thinks if I teach them or they teach me. She sees goons keeping eye on her and thinks what to do, how to go home. She enters shop and tells the lists of items which she needs.

Sangram Singh Chautala having wine with his goons. He asks his goon to bring that girl. Other goon comes and tells that she went to market. Sangram Singh plans to molest her in market.

Aaliya tells Tanu that the woman Munni is not Pragya, and asks her to stop her imagination. Tanu asks what did she talk to Munni after sending her out. Aaliya says nothing. Tanu asks if you are betraying me. Aaliya says I have realized that she is Pragya’s lookalike and fulfills all our wishes. She says she asked Munni to convinced Abhi to get her married to Purab.

Tanu says so you was thinking this, and asks her to solve her problem first and make her marry Abhi. Aaliya says Abhi will not think about her for now, as Pragya is in his heart and mind, till then I can settle down with Purab.

She says Purab had challenged her that Abhi will never ask him to marry her.. She says once Munni convinces Abhi, then Abhi will force Purab to marry her.

Disha is walking in the market. Sangram Singh and his men try to catch her. She runs. They surround her on the bike. Sangram Singh comes to her and says you are very beautiful. I have never seen such beautiful girl in Haryana. He asks how did you get time to fight with my men. Disha says they were doing wrong, and I can’t see any wrong happening.

Sangram says you have done gandhigiri and asks why did she beat his men. He asks about her father. Disha says Vijay Chauhan. Sangram Singh says you are saying as if your father is Amitabh Bachchan. He pulls her closer. Disha slaps him hard and asks him to go taking his respect in his hand.

Sangram Singh says you have slapped me. Disha says you might be feeling pain. Sangram Singh asks his men to hold her. Disha shouts for help and asks someone to call Police.

Purab comes there in car as he is site seeing. Driver tells that some poor person might be stuck. Purab sees Disha and says we have to save her. Driver says he is Sangram Singh and is dangerous. He asks why you are interfering and says this is that girl’s destiny