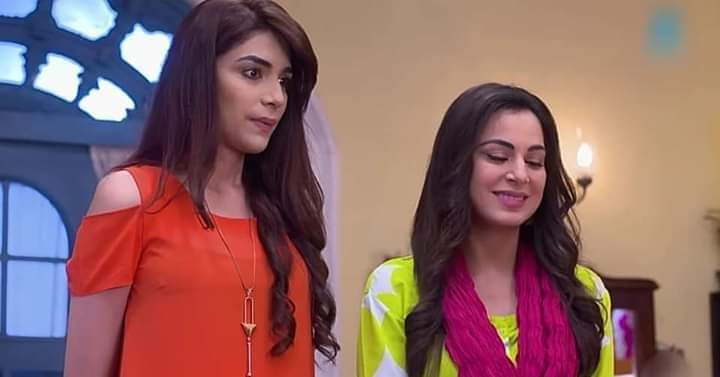 Karan doesn’t wear a chain in order to avoid it tucking with Preeta’s stroller again. He finds her real irritating. There, Shrishthi appreciates the worker for spilling paint in the right time and place. She takes a bottle filled with oil spills it all across right beneath the stairs.

She awaits Sameer, but it was Karan coming down and fell because of oil. Shrishthi comes to help him and tells him she is a crazy fan of his. Karan says she might not be the prettiest but this the tallest fan. Shrishti compliments his shots.

Karan spots Preeta and tells Shrishti he loves all his fans except this girl. Shrishti recognizes her as Dee, then makes up she is a ‘Behen ji’. Karan tells Shrishti how Preeta came into his room without his permission.

Shrishti gives him tips about irritating Preeta, that he should  sing and dance around Preeta that she might hate. Karan thanks her for the tips. Shrishti introduces herself as assistant of Vandy, the wedding designer.

At home, Shrishti is excited to tell Preeta she has decided to stay happy now. But She doesn’t share that she got a job and keeps it a surprise. Preeta shares that her day was a bit strange, she discusses about Kareena, Rashi and wonders how she fell off the bench.

Shrishti says Rishab had finally saved her. Preeta asks how she knows about it. Dadi comes in then to take them for food. They go outside. At the dinner table, Sarla says it’s a rule of house to have dinner with each other, she cooked for everyone. Shrishti denies eating anything cooked by Sarla. She wonders what if her hands are poisoned as much as her words are.

Dadi insists on Shrishti to sit, but Shrishti apologizes and clarifies they won’t eat here from now on. She stakes Preeta inside. Sarla cries and denies eating as well.
In the room, Shrishti is hungry and asks Preeta about ordering something.

They read about a shop nearby, Preeta looks into her bag and says she is only left with Rs. 20. They were only able to order bread-butter. Shrishti says she isn’t hungry, drinks water and lay down to sleep.

The next morning, Rashi comes to Dadi and her husband with some photographs to select a girl. They select one photo. Kareena comes there with a photo and says she has selected a girl for Rishab. Rashi recognizes the girl as Sherlin. Rashi suggests Kareena to see the photo they selected, this girl is more innocent.

Kareena asks what the profit value of this proposal is, would they be able to invest in their business? She insists Sherlin is daughter of her friend, and chairman of Rotary club. She thinks she will make this wedding possible, bringing her friend’s daughter in the house would raise her ranks and value here. Rashi is worried about Kareena’s decision. Dadi insists Kareena has always taken a good decision for the family.

At night, Preeta wakes up and doesn’t find Shrishti in the bed. She comes out to look for her. Sarla was crying in front of Bee ji saying she can’t think about a way, she only got a week else will lose Kumkum Bhagya. Preeta hears this. Sarla tells Bee ji their living depend upon the earnings from the hall.

Bee ji gets choking. Preeta comes to the room and feels angry that Sarla got a good lesson, she herself was asking for money from them. She then watches the other side of the picture, and wonders what if they are already short of money. Three lacs is a big amount, and thinks it’s because of Sarla they are living under a roof. She decides to do whatever is possible and will help her mother.

Sarla comes at the door of kitchen and watches Shrishti eating in the kitchen, she speaks to herself that her mother is really bitter but cooks well. Sarla thinks about doing anything for Kumkum Hall, she has two more daughters to bring up. She must do anything for them.

The next morning, Dadi is doing her exercise. Rishab watches her and greets her with morning. He asks about the miracle today. Dadi tells Rishab she got a call from the Hitler Preeta. Rishab says he didn’t know Preeta hurt her sense of humor as well. Dadi says if she won’t do it Preeta won’t spare her.

She tells Rishab she isn’t that bad, Rishab agrees and goes taking a call. The manager says he booked Kumkum Bhagya hall. Rishab thinks about thanking Preeta. He passes by Kratika’s room and finds her speaking to Preeta for help with selection in her dress. He smiles thinking about Preeta.

On the way, Preeta couldn’t hire a bus as she gave twenty rupees to Shrishti. She remembers she had given Shrishti Rs. 20 to buy Vadav pao. She was worried how long she can drag it, she needs money for Shrishti as well. And Sarla and Bee ji are in greater problem than her. She gets a call and says she would soon reach home.

Preeta wonders how she can be so confused for this necklace, this is so shiny. Kratika says its old fashioned, Preeta insists such jewelry never goes out fashioned. She selects a dress for her as well. Kratika asks her to wear it and show it to her. Preeta denies but Kratika forces her in front of mirror.

Karan comes at the door. Kratika asks about his consent, he was left speechless. It was then Karan remembers if someone compliments Preeta she gets irritated. He asks Kratika to keep on wearing the necklace, he has to check it and suggests it’s a bit loose. Kratika goes to take a call. Karan comes to help Preeta and tightens the necklace, she stares towards him.

He compliments this necklace looks beautiful; enjoying to tease her. Kratika returns, Karan says this is really nice. She agrees to wear it and sends Karan out of the room. Karan thinks he would get a lot of chances tonight for the revenge. Preeta wonders why he is smiling so much. Rashi comes with some other options for Kratika.

Kareena watches Preeta wearing the necklace, she fumes and tells Preeta to remove the necklace. She tells Kratika this necklace suits her a lot. Preeta also appreciates it. Kareena sends her for Dadi’s treatment. Rashi tells Preeta to speak to Rishab as soon as possible.

In the corridor, Preeta gets emotional at how much Kareena loves her children. She thinks a mother and child share only such special relation. She gets weepy about how she would arrange the money for Sarla and decides to call Pragya. There, Pragya wasn’t home and Tanu receives the call. She is happy to hear about Sarla’s problem

Preeta cries for not being able to help her mother. Rashi comes there and finds her crying, she tells Preeta to speak to Rishab by tonight as Sherlin is coming for the party.
In the room, Rishab and Sameer were selecting dress. Sameer taunts Rishab takes more time than girls do, he was irritated as it’s been one and a half hour now. He walks out of the room silently.

Preeta comes in then. Rishab cheers watching her. Preeta suggests the blue dress for him, it would suit him well. Preeta says she feels every person needs a companion to solve some problems of his life, whom you can share everything. She says it must be someone who can take care of you when you are broken; and at this point of life it can’t be a mother. Rishab qualifies it can be a friend like her only.

Preeta says it’s a life partner, who shares her life with him. She says it feels he is in the right age to get married, her father always said if the right age passes by we don’t feel the happiness. Rishab says he finds his mother’s shadow in whatever she is saying. Preeta agrees Rashi told her to speak to him, but she is speaking to him because she considers herself a well-wisher. It’s her right to do something for him, may it be to show the right path. She says there would be a person with him to give him consent at any time of life. Doesn’t he feel excited about it? Rishab says he won’t mind if the partner is like the picture she created.

Preeta cheers saying she would tell his mother, she would be really happy. Rishab conditions he will only get married if partner is like her. She nods and cheerfully leaves. Rishab wonders where he would find a girl like her.

In the room, Rashi was happy and thankful to Preeta and prays for her happiness. Preeta wish Rashi has selected a nice girl for Rishab. Rashi says Kareena has selected a girl for Rishab, Kareena’s decision is never wrong. She says Sherlin and Rishab will meet each other in tonight’s party and asks her about help. Rishab is ready wearing the dress Preeta selected.

Rashi is weepy and says her family always joked about her for wanting to make Rishab marry. She says she wasn’t hopeless and promises Preeta a diamond set. Preeta says only her blessings are enough. She says Kratika wanted a special dress for her, they brought it. Preeta denies but Rashi says gifts aren’t forbidden. Preeta thinks about asking her salary in advance, may be this helps Sarla. She was worried what Sarla must be doing.

At home, Sarla gets a call from Tannu who mocks her helplessness. Sarla says she has heard wrong. Tannu mentions she selected a wrong person Preeta for help. Sarla scolds her not to poke her nose into other’s matters. Tannu asks her to come to her home and apologize touching her feet, only then she would forgive her. Sarla slaps the phone shut and fumes over Preeta for sharing the matter in the world.

Dadi asks Pandit ji about preparations of pooja. She spots Preeta and sends her for getting handkerchief. Shrishti spots Preeta coming towards her and thinks if Preeta watches her here, the whole game would be spoilt. She thinks about hiding herself somewhere. She runs the other side and hits Sameer.

Preeta asks who is it, she thanks her anyway. Shrishti regrets replying with a welcome. Preeta recognizes the voice and insists on Shrishti to come outside. Shrishti opens the door. Preeta asks if she has gone crazy, why she has hidden inside the washroom.

Shrishti tells her to listen to her, she is free to move anywhere here. She tells Preeta she came from the side of wedding planners. Preeta cheers then complains why she didn’t share with her. Shrishti says she enjoyed the game, where she becomes friends with the one who hates her. She confess she made her fall into Rishab’s arms.

Preeta charges over Shrishti. Shrishti says Kareena promised her double salary. Preeta says she doesn’t care because they don’t interact directly. Shrishti says the one who doesn’t know their sisterhood would open his heart in front of her. Someone opens the door of the room then.