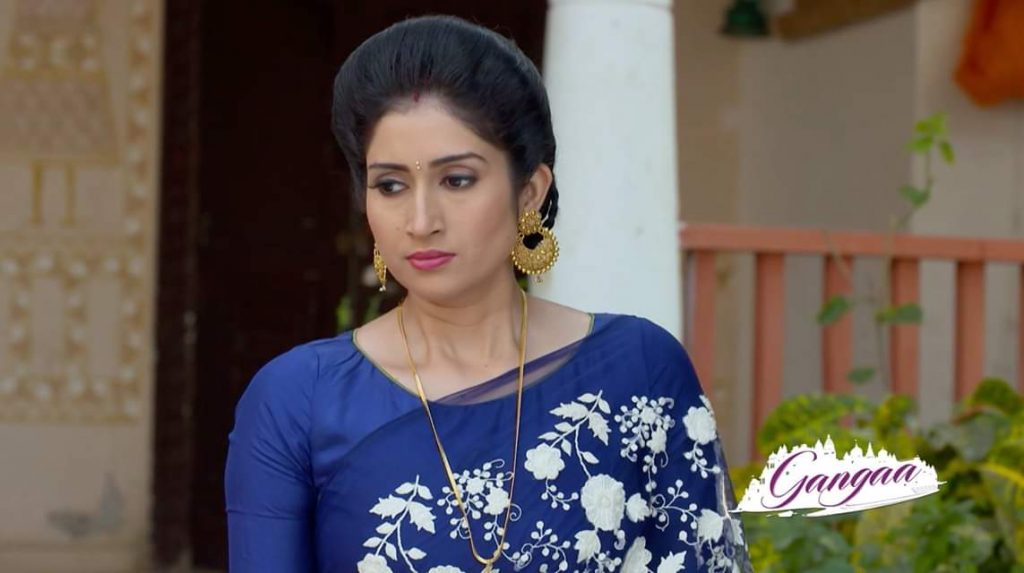 Gangaa is shocked knowing Sagar chose Sahil for her. She says Sahil… Niranjan says yes, Sagar said you both like each other, and Sahil wants to marry you. She cries and runs from there, while Niranjan talks to her. She goes to Sagar and looks for him. He recalls Sagar’s words. Sagar comes and asks what happened, did you talk to dad, did you say yes to Sahil? Jhanvi looks on hiding afar.

Sagar says Sahil will keep you very happy, you have gone through a lot, all this wrong will end, I will bring you out of this, I have fulfilled my promise, my Gangaa will get married to such a nice guy. Gangaa slaps him. Sagar and Jhanvi get shocked.

Sagar asks what wrong did I say or do, what happened? She cries and leaves. Sagar goes after her. Madhvi asks Maharaj about the items? She sends him to check Pulkit’s clothes. Madhvi asks Gangaa does she want anything for the kitchen? Gangaa runs out. Madhvi wonders where she is going, and sees Sagar going after Gangaa. Prabha asks Madhvi to see what’s happening. Jhanvi signals Madhvi.

Gangaa and Sagar come on the ghaat. Sagar asks why are you running? Gangaa asks how can you make me marry Sahil, are you mad, how can you think of this? He asks why did you get annoyed? She says the problem is that you don’t understand!

He says I’m really sorry, I did not know you will feel bad, I thought Sahil is a nice guy and you will like him, fine if you don’t like him. She says I don’t care about Sahil. He asks do you like someone else, tell me, what do you want? She says you, I love you, Sagar.

Sagar gets shocked. She asks don’t you know this or you want to be ignorant? He says what, I did not see you that way, I wanted you and Sahil to meet each other. She says you want to meet someone else after marrying you? He gets shocked again.
He asks what, marriage, what are you saying? She says we both have married, you are my husband, I’m your wife! He looks on stunned.

She says I hid this vermillion from everyone, do you remember or you’ve forgotten? She holds him and cries. He moves her hand and gets away. He says Gangaa, that was childhood moment, how did you take it so seriously, you are stupid, I never thought this about you. He holds her and says I really like you, I care for you, I love you, but just only as a friend. She cries and asks just as a friend? She says but I regard you as my everything, what should I do now, I do not believe you can’t see my love for you in my eyes.

He says maybe you are right, I have seen it and ignored it, you were always my lovely friend, who understood my heart without my saying, that friendship can change to love… thinking this is wrong for me. She asks why is it wrong for you? He says leave it, we are best friends, that’s it, nothing else! He says if you think the same way, it may affect our friendship. I don’t want our friendship to get spoiled by this, you tell me what type of guy you want, I will bring such guy, trust me, I want to see you happy.

She cries and says all my happiness is by you. Happiness’ other name is Sagar for me, tell me, can you give me that happiness? He asks what’s this? She says it’s love. He says don’t make me feel guilty, I never thought you will take this childhood matter so serious, I like Jhanvi! She gets shocked. He says I never told you, as I did not know you will love me.

She says fine, don’t feel guilty or bear my love burden, don’t worry, I will not come in between your way, congrats for your new life, I won’t be able to love someone else in this birth, you go your way and don’t care about me, I have been alone till now, I will not die without you. She cries. He looks at her. She walks away.

Gangaa gets sad and walks on the stormy road. She recalls their childhood. Dil jude bina hi tut gaye… plays…. She recalls Sagar’s concern for her. Sagar asks her to stop and runs after her. He sees a truck coming either way and shouts Gangaa!!! He pulls her aside and saves her from getting hit. She falls over him and her tears fall over his face.

He holds her hand and stops her. He asks is she mad, can’t she see the truck, if anything hadhappened to her then… she says so what, you have many friends, if one dies, you have many. He says listen, I thought about Sahil because… she says stop it, I can’t listen anymore! She moves back and the black beads falls. He looks on. She says when relations break, this was just a thread which was meant to break.

Sagar seeing Gangaa leaves. She cries and goes home. Sagar picks the black thread and beads. He recalls their childhood moment. She ties the thread on him and says this is me, Gangaa, don’t remove this thread ever. He recalls her words and says this thread was strong Gangaa, maybe I could not keep our relationship strong,I have hurt your heart, you went and this also broke.

Gangaa comes home and recalls Sagar. She cries and goes to Sagar’s room. She sees her and Sagar’s pic and cries. Little Gangaa appears. She asks her to see what happened to her, everything was a dream, this house is not mine, the childhood Sagar was mine, but today’s Sagar is not mine, he wouldn’t have thought of giving her out to someone else, and how he said he doesn’t love her, he asked me to marry someone else.

Maharaj asks where did she go? She says I’m stupid and does all mistakes. Jhanvi asks Sagar why was Gangaa upset? He says I don’t want to talk right now and goes. Madhvi looks on. He goes to his room and recalls Gangaa’s words. He gets her anklet and recalls their childhood. He says why are you doing this, I don’t love you, you were adamant and wanted me to fill vermillion in your forehead, so I did so, it’s your mistake, why are you breaking relations, that was childhood.

Gangaa tells Niranjan that she doesn’t want to marry, Sagar had a misunderstanding. He asks are you fine? She says yes, I want to study, I don’t want to marry. He says fine, it’s your life, study, I’m with you. She turns to go. He stops her and asks is there anything else? She wipes her tears and says no, I will go and see if Pulkit had gotten ready or not. She goes. He says he doesn’t know what happened, she doesn’t look fine.

She recalls Sagar’s words. Pulkit comes and asks how am I looking? She says great! He asks what happened, did you fight with Sagar? She says no, does my life revolve around Sagar? She fixes the broach to his outfit. He asks should I talk to Sagar? She says no, are you happy? He says yes. She asks really, you don’t like this colour? He says Mum likes this.

She says the family chose the girl, what about you, you are marrying for Supriya’s helplessness, will you forget Saloni? He says Saloni moved on, everyone has the right to move on, I don’t know if I will forget everything and move on, but I will try. Sagar hears them.

She says your heart is really big that you have forgiven Saloni, but I’m not great like you, I can’t forget anything and can’t move on, I can love by my wish, some people don’t keep love and call their weakness their necessity of live. Pulkit asks about who she’s talking about? She says nothing, I will just come. She sees Sagar there. She says Sagar got the stole, he will fix it. she goes. Pulkit asks Sagar what happened, did you fight with her again?

Gangaa recalls Sagar and cries. Sagar sees her and covers her with the shawl. She removes it. He covers her again. She puts it down. He covers her again. She asks why are you doing this? He stops her and says even I want to know why you are doing this, you are ruining your life because of me, I can’t see this. She says you have hurt me by breaking relation and you are getting hurt. She asks him to live his life, but he can’t change her. He stops her. She says don’t give me lecture, I can’t move on, I know how to keep relations, you forgot this, but for me, you are my husband and I’m your wife. He looks at her.

Gangaa says no one can get love by being forced. She asks him to live his life. He stops her and asks her not to punish herself, he can’t live with this guilt, and thinks about her. She asks on what relation will you think about me, no need to worry about me, Gangaa knows how to take care of herself. She moves back and cries. He comes to his room and says Gangaa is mad, she’s still as stubborn as she was in childhood, this will ruin her life, what should I do?

He takes her anklet and says no Gangaa, I will not let you play with your life, you are living in the past, which changed, I have to do something to change you. He looks at himself in the mirror. He says there is no other way, I will do this for Gangaa, so that she does not get ruined after me.

Sahil snaps Gangaa and says I hope you won’t feel bad now? She stops him and says Sahil, I can’t marry you. He asks why, did anyone tell you anything? Sagar and Uncle said you agreed, share any problem, I can wait if you want. She says no need to wait for me, I can’t love or marry anyone in this birth.

Jhanvi asks Sagar to open the door. He opens the door. She hugs him and cries, asking why don’t you wish to talk to me? He recalls Gangaa’s words and thinks this is the only way that Gangaa will forget me. He asks do you love me, just tell me. Jhanvi says yes, I love you, you wanted time to decide. She asks him what happened? He says I have taken my decision, I’m sure about my feelings, you don’t need to wait, come. He takes her to Gangaa.

Sagar looks at Gangaa. Jhanvi smiles as he holds her hand. Gangaa gets upset. Madhvi looks for Gangaa and sees them. Sagar says I want to tell you something, Jhanvi is not my friend, she is my girlfriend, I love her. Madhvi smiles happily. Gangaa gets shocked. Gangaa says it’s great thing, congrats! She goes.

Jhanvi hugs Sagar and says love you, I will tell my friends that you told me I love you, they felt you will never tell me that. She goes. Sagar says I hope Gangaa will think about her life and make a new start after my step. Gangaa goes to her room and shuts the door. She cries and checks the old things she kept.