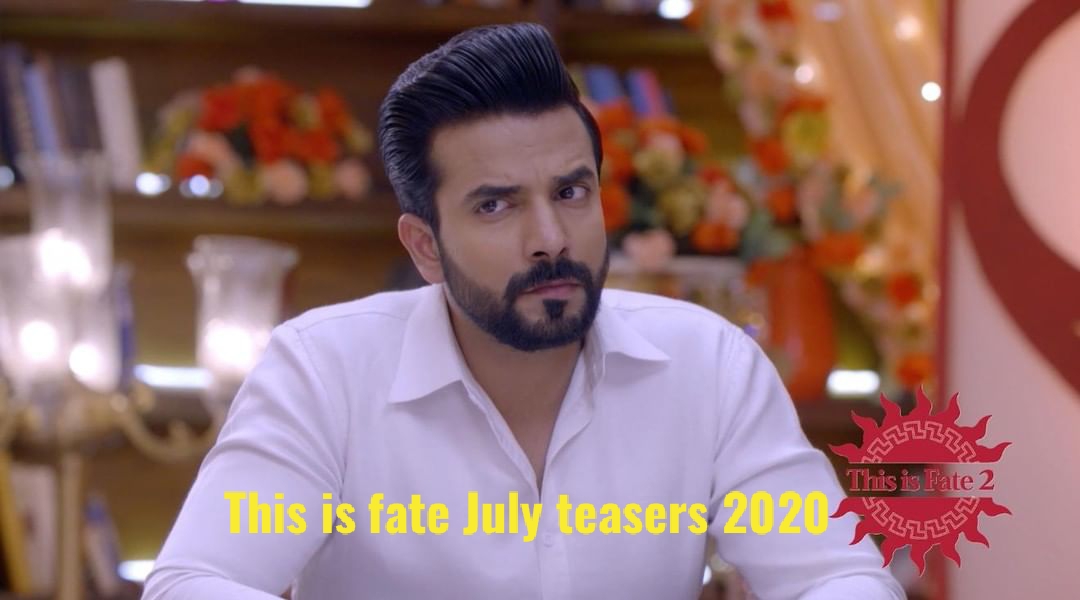 This is fate July teasers 2020: the hunt to expose Sherilyn and Privthi continues, Manisha is determined to end the luthras and Preeta is caught between two brothers.

Manisha escapes from the police station, while the luthras enlist the police help to unmask the person who tried to kill Rishab.

The luthras learn that Manish is the one behind the attacks. Everyone still doubts that sherylin pregnancy is for Rishab. Manisha targets Preeta now for her revenge mission.

At the police station, Preeta tries to tell Manisha the truth about privthi but he is adamant. Meanwhile Sherilyn is very jealous of Preeta and privthi attention to her, she threatens him.

Karan is suspicious of privthi and Sherilyn relationship after walking in on their argument. He makes it a point to tail after them.

Karan follows Sherilyn and privthi but ends up in trouble with the police. Meanwhile Shruti is still jealous over tanvi and Sameer’s relationship.

1 July 2020
Sherlyn drives a wedge between Karan and Preeta. Shriti finds out that Sherlyn was responsible for the incident that ruined their event.

Rishab realises that Sarla is innocent but he cannot help her get released from jail. Karan finds out that Sherlyn is a deceiver and has that she has something dangerous up her sleeve.

Finally, Sarla gets the justice she deserves. Sherlyn is starting to grow suspicious of Karan, she is convinced that he is after her. After finding out that Karan helped Preeta, Kareena influences the family to turn their backs on him.

Shriti tries to spill the beans about Sherlyn’s lies but Preeta stops her. Karan keeps a close eye on Sherlyn, will he eventually catch her in the act?

Sameer tries to get information about Sherlyn’s boyfriend, but it is evident that she covers her tracks very well.

Preeta is hot on Sherlyn’s heels, will she catch her this time?

Sarla invites a matchmaker to choose a life partner for Preeta. Will she agree to get married this time?

Karan hears about Preeta’s proposal. He cannot stand the thought of Preeta being married. He pours out his heart to Preeta, the outcome of this event is not an expected one.

Preeta is impressed by her potential groom but this does not sit well with Karan.

Karan asks Preeta to postpone her wedding until they complete their mission. The two find out that Sherlyn is observing a fast for her boyfriend. Will they be able to catch her in the act?

Shriti is convinced that Preeta and Karan are in love. It appears that Sherlyn’s boyfriend will be at the Luthra house to end her fast.

It is revealed that the man having an affair with Sherlyn is actually the man who is meant to marry Preeta.

Sarla approaches Rakhi with a marriage proposal for Preeta and Karan. Sherlyn continues her tricks with her lover. Preeta and Karan are finally on to Sherlyn’s lover, but will they catch him in time?

Rakhi is under the misunderstanding that Sameer and Shriti are in love. Sherlyn and her lover are persistent in trying to make their love story a success.

Preeta and Karan are struggling to fulfil their mission of catching Sherlyn with her boyfriend. Will this cat and mouse game ever end?

Everyone is happy and rejoices over Preeta’s engagement. However, the Luthra brothers do not share the same sentiments.

Prithvi worries about Karan exposing him. It is the day of the engagement and Sarla is showing off her future son-in-law to everyone at the party.

Karan tries to warn Preeta against marrying Pritvhi. Janki catches Sherlyn and Pritvhi being intimate with each other.

Janki tries to tell Sarla the truth about Prithvi, but Kabir keeps getting in the way. To silence Janki, Pritvhi and Sherlyn take a drastic step.

After seeing Sameer and Shriti together, Sarla is convinced something is going on between the two of them. Pritvhi’s intentions are questioned when he fails to display affection towards Preeta.

Sameer steps in and comforts Preeta when she is traumatised by the fire incident. Karan and Rishab suffer from the smoke, will they make it?

Preeta cannot stand seeing Karan in a critical state. Pritvhi manages to redeem himself from the embarrassment he felt during the fire.

Pritvhi goes to Sarla’s house in an attempt to finish what he started with Junki. Will he be able to end her life this time?

Pritvhi tries to finally kill Janki but he gets caught in the act.

Karan finds out that Pritvhi is having an affair. He devises a plan to catch him red-handed.

Kareena pushes forward the date of Sherlyn and Rishab’s wedding. Karan tries to prove to Preeta that Pritvhi is not a good person, but he keeps failing at his mission.

Prithvi finds out Janki may regain consciousness anytime and goes to check on her but to his disappointment, Pragya’s grandmother is there.

Junki regains her consciousness but she does not remember anything about her past. Sherlyn and Pritvhi feel relief, little do they know what’s coming their way.

Karan’s career is progressing and the Luthra family are happy about this. Mahesh overhears Rishab talking to Sarla about Preeta, he realizes that he is in love with her.

Karan and Preeta keep making each other’s lives a living nightmare. Janki faces injustices due to her position but she does not accept disrespect from anyone.

Pritvhi pushes Janki down a flight of stairs to end her life. Preeta and Karan desire to complete their missing but will they be able to do it before he leaves?