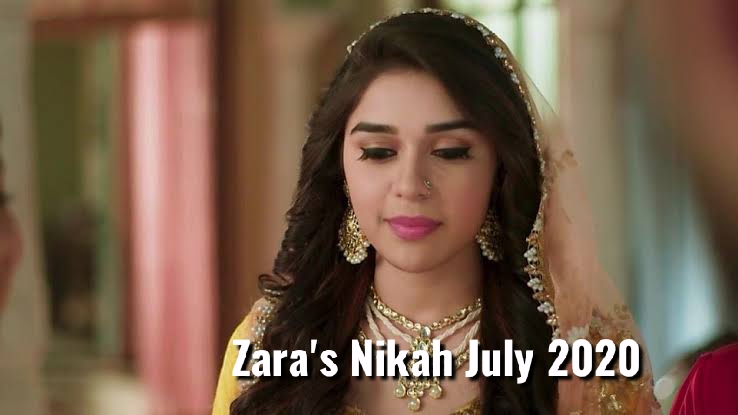 Zara’s Nikah July teasers 2020: Kabir and Zara’s marriage is set to happen despite their personal reservations, soon they discover the selfish and hidden motives of their parents. How will they cope?

Zara’s face is all over the media for her stand against instant divorce, she accuses Kabir of playing dirty and is more determined to beat him at his own game.Zara joins the Sharia board to prove a point to everyone, meanwhile rukshar is happy as her dream of being Kabir’s wife is coming to pass.

Shabhaz brings marriage proposal for Zara from his son, with an hidden agenda to take over the head of the board. Ayeesha is doubtful.Kabir and Zara’s marriage is finalized by the country’s head priest in order to bring peace to the conflicted state of Lucknow. however they are both against it. Meanwhile rukshar is still preparing to get married to Kabir.

Kabir And Zara Conspires To Break their Marriage proposal. Rukshar and Zeenat are still in the dark of what is happening around them and Ayesha is worried.At the marriage introduction, Zeenat reveals that Kabir is already engaged to her sister rukshar putting the introduction on hold, Sabhaz salvages the situation however the duo are more determined to stop their own wedding from happening.

Shabhaz resolves to send rushkar away from his house as a way to pacify Zara’s parents. However both parents discover the plot of their children and are even more determined to get them married. Despite their refusal, their engagement ceremony is fixed.Ruskar plots to stop the engagement ceremony, she secretly prepares for her own engagement ceremony with Kabir.

It’s a big day for Zara and Kabeer as they emback on a new chapter in their lives, a chapter that will bring them closer to each other.

Despite all the self-sabotage behaviour, the pair is forced into marrying each other.

The newlyweds, Zara and Kabeer, are faced with a lot of challenges in their marriage, but they are working against each other, instead of working with each other to fix their problems.

Shebaz unvails his true intentions for the supporting the marriage between Zara and Kabeer.

Kazi Irfan is delighted to have Kabeer serve as a member of the Shariah Board. He splurges the young man with years of wisdom and gifts him with a special pen.

Kabeer and Zara go on their honeymoon in Kashmir but Rukhsar has a surprise for the newlyeds.

Rukhsar resorts to crime whilst trying to stop the formed union between Zara and Kabeer.

Kabeer is searching for Zara after unidentified women kidnaped her. The pressure is increasing for Kabeer because Zara’s parents are concerned about their daughter.

Despite being involved in an arranged marriage, Zara and Kabeer are now starting to develop a romantic relationship.

Kabeer Ahmad is determined to go against his principles for his wife. Shebaz wants Kabeer to succeed Qazi irfan and become the new city’s Qazi.

Kabeer wants Zara to return the ten million weeding check given to her by her in-laws but Zara has plans of her own about what to do with the money.

Like all relationships, Kabeer and Zara’s relationship runs into a pothole and the couple is finding it hard to resolve the conflict.

Zara attemps to make peace with Kabeer after their first fall-out but Kabeer is making difficult for her.

Zara and Kabeer share the bed for the first time as a married couple, after months of not being intimate with each other, Kabeer believes it is his duty to fulfill Zara’s woman needs.

Zara is on a mission to expose Rukhsaar and Miraj as frauds. Rukhsaar is rising to the task to try and stop her.

Amaan Ahmad is hospitalised after his mother (Zenaat) forced him to fast for the whole day like adults even though he is still a young boy who can’t fast. The Ahmad family is angry at Zenaat for forcing the young boy to fast.

The Ahmad family break their first fast at the hospital. Meraj is slowly winning Kabeer’s heart and forging his way into the Ahmad family.

Zara invites her family to join her for ‘iftar at the Ahmad family home. Kabeer is surprised to hear that Meraj will be giving 50 percent of his share of project to Rukhsar.

Rukhsar is scheming her way out of her arranged marriage to Hamdan, she has eyes on someone else.

Zara investigate the events that took place in Kashmere, she strongly believes that Rukhsar was behind everything.

Zara finds hard evidence that supports her claims that Rukhsar was behind everything bad that happened to her and Kabeer in Kashmere during their honeymoon. Rukhsar and Miraj are determined to stop Zara before she exposes Rukhsar.

The Ahmad family wants answers about what happened between Kabeer and Rukhsar and they also want to know who was at fault.

Zara investigates the allegations brought fourth by Rukhsar against Kabeer, the truth bring disappointment and shame.

Kabeer and Humdan are preparing for Rukhsar’s wedding. Rukhsar is contemplating suicide. Rukhsar is blackmailing Shebaz for huge amount of money.

It is a big day for Rukhsar and Humdan and stakes are high for Ahmad family.