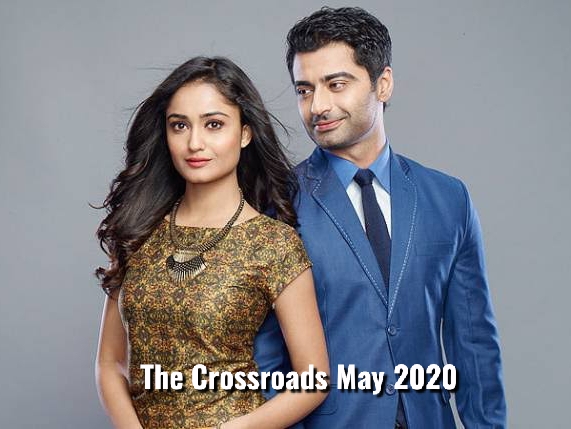 The Crossroads May teasers 2020: There’s a wedding blast at a wedding, lives are lost and Swadheenta has another court case to fight.

Starlife The Crossroads May teasers 2020.

Arvind takes pictures of the places he intends to plant the explosives at. He plans to plant a bomb on the day of SwaAdarsh’s marriage. Swadheenta brings lunch for Adarsh. Simmi steals Adarsh’s engagement ring to test Suhasini.

Simmi decides to ruin Adarsh and Swadheenta’s relationship. Yash tells Asad about the Delhi attack. Simmi faints on learning about her health reports. Jaidev tells Jaya that Simmi has been admitted to the hospital.

The Crossroads Saturday 2 May 2020

Arvind tells his roomates that the Indian army has placed spies in colleges in Delhi. The doctor tells Suhasini that Simmi is pregnant. Simmi tells Abhay that she knows about her disease.

Suhasini confronts Abhay about not informing her about Simmi’s ailment. Ahuja is grateful to Swadheenta for helping Simmi. Arvind shares his plan with his friends about planting a bomb in Asad’s scooter!

Asad tells his friends to attend all the wedding ceremonies. He also asks them to help the Sinhas in the sangeet arrangements. The minister wants Manohar to meet Allan Broad. Arvind plans to plant a bomb in the Sinha House.

Asad assures Yash that he will report to him if he learns something about the terrorists. Radhika tells Asad that his friends are missing from college.

Allan tells Manohar about a bomb threat over Delhi and advises him to cancel the wedding. Arvind and his companions make arrangements to plant the bomb at the Sinha Mansion. SwaAdarsh dance on their sangeet.

The families decide not to postpone SwaAdarsh’s wedding. The police find the wires planted by Arvind and his friends.

The Sinhas and Ramakrishnans celebrate SwaAdarsh’s haldi ceremony. Asad includes Radhika in the celebrations. Arvind has plans to plant explosives in the college.

The Crossroads Wednesday 6 May 2020

Iftikar alias Arvind’s associate, is worried about their plan failing. Suhasini tries to calm Manohar down. SwaAdarsh spend the night talking to each other over the phone. Iftikar plans to kill his companions after the blast!

Iftikar puts the bomb in a gift box and asks Haider to give it to SwaAdarsh. SwaAdarsh get ready for their wedding. Iftikar manipulates Asad into taking the same scooty in which he has planted the explosives.

The Crossroads Thursday 7 May 2020

Asad takes Radhika to Arvind’s house. He learns that Arvind, Ravi and Rajesh are terrorists! Yash reaches Arvind’s house to investigate the matter.

Swadheenta and her family reach the Sinhas’ house for the wedding. Will Yash be able to defuse the bomb that Iftikar had planted in Asad’s scooty? Will Asad, Abhay and Yash succeed in averting the blasts?

Yash asks Abhay to circulate the photographs of the terrorists. Swadheenta gives an earful to Asad for not attending her wedding. SwaAdarsh’s wedding takes place!

The Crossroads Saturday 9 May 2020

Asad tries to warn the family members about the bomb at the wedding venue. Swadheenta delivers a speech on her wedding. Iftikar shoots Abhay. The police shoot Asad, mistaking him to be a terrorist.

Haider learns about the bomb blast. The police defuse the bomb at the wedding venue. The doctor informs Adarsh and Jaidev that Abhay is dead! Meanwhile, Suhasini and Manohar try to reach Abhay on his phone.

Ahuja ensures that Simi doesn’t find out about Abhay being shot. Suhasini and Manohar break down on seeing Abhay’s dead body!

A news reporter manages to record Swadheenta’s statement on a secret camera. The Sinhas believe that Asad killed Abhay. Haider and Zubaida learn that Asad is dead. Suhasini and Manohar hide about Abhay’s death from Simi.

Jaidev tells Jaya how Asad had shot Abhay and then got killed himself in the encounter. Meanwhile, Manohar decides to get Asad’s father, Haider punished. Adarsh asks Swadheenta to stay away from the Jilanis.

Simi is shattered to see Abhay’s body. The Sinhas mourn his death. Ramakrishnan asks Swadheenta to break all ties with the Jilanis. She tries to prove to Jaya that Asad is innocent.

Zubaida tries to convince Suhasini that Asad was not a terrorist. Later, she asks Swadheenta to prove to everyone that Haider and Asad are not terrorists. Swadheenta visits Haider in jail.

Simi faints during Abhay’s funeral. The police department pays homage to Abhay. Swadheenta carries Asad’s body to the burial ground. She also vows to prove Asad’s innocence to everyone.

Adarsh is furious at Swadheenta for defending Asad and Haider. Swadheenta decides to fight for clearing Asad’s name and take up Haider’s case. The Sinhas are upset with Swadheenta!

The Sinhas arrive at the court for the first hearing of the Delhi Blasts case. Swadheenta is also present as Haider’s lawyer. The proceedings begin.

Swadheenta is trying hard to prove Haider innocent in the court. She even calls her husband, Adarsh to testify. Will he speak for or against Haider?

Swadheenta and Suhasini have a confrontation about the case. An upset Adarsh promises Swadheenta that he will ensure Haider gets hanged! Later, Simi comes to know about Abhay’s killer.

Iftikar alias Arvind’s associate, is worried about their plan failing. Suhasini tries to calm Manohar down. SwaAdarsh spend the night talking to each other over the phone. Iftikar plans to kill his companions after the blast!

Yash testifies against Asad in court. Suhasini tells the judge that Arvind is not a terrorist and finding him will be waste of time. However, Swadheenta strongly disagrees.

Suhasini makes a robust plea to the judge to give the verdict while the judge gives three days to Swadheenta to bring Arvind to court! Later, Adarsh rescues Swadheenta from a few protesters.

Adarsh and Swadheenta happen to visit the site of the blast at the same time. Swadheenta tries to revisit the incident and stumbles upon something that could prove crucial in the case.

Swadheenta tries to prove that Arvind was present at the site during the blast. Yash lies to Suhasini and convinces her that he is speaking the truth. Meanwhile, Manohar learns a shocking truth that can change the case.

Allan Broad tells the media that Haider and Asad are terrorists. The police find evidences against them in their house. How will Swadheenta turn the case around?

Will Swadheenta and journalist Padmashree succeed in unveiling the truth behind the blast case? Meanwhile, Padmashree finds out a crucial bit of information that could shatter Swadheenta!

Suhasini becomes furious as Swadheenta accuses Manohar. She threatens to send her out of the house if Swadheenta drags Manohar into the case. Will Swadheenta leave Sinha House?

Swadheenta accuses Minister AK Choudhury and Manohar of being involved with Allan Broad. The court gives Suhasini a week to prove Swadheenta’s allegations wrong. What will Suhasini do now?

Swadheenta asks the police to check the CCTV footage at the mall. Bilal and Iftikar manage to get past the police check post. Swadheenta tries to track Yash’s location. Will Iftikar get caught?

Arvind assaults Yash and manages to escape. Adarsh asks Jaidev to send him a copy of the Delhi Blasts enquiry report. Manohar tells Jaidev to send a fake report to both Suhasini and Adarsh.

Adarsh confronts Manohar for providing the fake enquiry report. Swadheenta reaches Iftikar’s hideout. Adarsh and Padmashree try to track her location. Will Adarsh be able to save Swadheenta?

Adarsh and Paddy manage to locate Swadheenta. He and Iftikar have a fight after which Iftikar manages to escape! Suhasini confronts Manohar for keeping her in the dark. Will the police be able to find Iftikar?

Swadheenta tells Adarsh that Iftikar has evaded the police! Later, Iftikar demands to talk to the government.

Manohar admits to his mistakes.The court acquits Asad and Haider of all charges. The Sinhas apologise to Haider and Zubaida. Later, Suhasini performs SwaAdarsh’s grihapravesh! – finale