La Patrona premiered in April with full force and continuous plot progression. It is a story about the power tustle between two females in a small town called San Pedro Del Oro.

One of the females, Antonia Guerra came into control of the mines after the death of her husband and since then she has ruled with a tight fist, having zero tolerance for people who cross her path. She is able to easily kill or render useless all her enemies in a bid to remain the leading lady in the town.

One of her victims is Gabriela Suarez, a tough, strong willed and fiercely independent woman who worked in her mines and had the unfortunate pleasure of falling in love with her first son Alejandro. 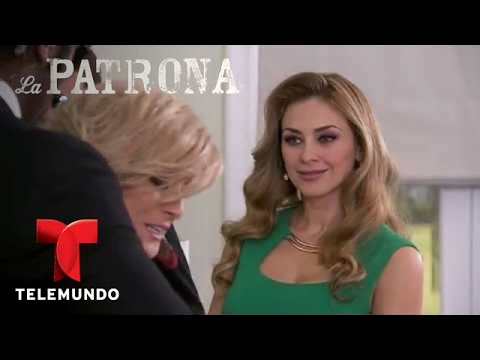 Because Antonia doesn’t want a commoner involved with his son and also the fact that she hates that Gabriela is not afraid to stand up to her, she frames and gets her locked up in a mental home where she is tortured for years and finally presumed dead.

But through a twist in fate for Gabriela, she meets a wealthy woman in the asylum. The woman, Constanza is also a victim to her husband’s greed. Together they escape the mental home, move down to London to recuperate, change their identities and return to their town to fight against the ‘Clique of evil men’ who had tried to destroy them.

The story line therefore takes on a new angle with Gabriela changing her name to Veronica Dantes and returning to the town as a wealthy widow of an influential Arabian. She is able to successfully deceive the town on her true identity and then one after the other she gets revenge on her enemies. This she does mostly by pitting them against themselves in a ‘Divide and conquer strategy’.

But this is not without a fight from the towns leading lady… Antonia Guerra.

So how did the series end?

☑ In the final episode, villain Antonia Guerra kidnapped her own grandson David to lure his mother Gabriela to a mine rigged with explosives.

☑  Gabriela had already been restrained by Alejandro to prevent her from going to fight his mother thereby putting his life and the life of their unborn son in jeopardy. But she is able to free herself and run off to save her first son David.

☑ The two women had a heated confrontation filled with physical takedowns. However, Antonia finished with the upper hand and had a gun pointed right at Gabriela and David.

☑ But Antonia’s son Alejandro, aware that Gabriela had gone after his mother, came in to save his beloved Gabriela but ended up  being shot by his Antonia when he tried to play the hero.

☑ Antonia then set off a timer to explode the dynamite and kill everyone inside including her son and grandson but the police managed to save everyone, including an unconscious Alejandro.

☑ Everyone escaped the explosion but Lagarto fired on Antonia as she escaped, rendering her unconscious. The police officers, led by Rodrigo Balmaceda, fired on Lagarto and killed him.

☑ In the hospital, Alejandro remained in critical condition while Antonia learned that Lagarto’s shot left her total paralyisis.

☑ Alejandro survives and Antonia is sentenced to home prison for 500 years. Gabriela has her child and saves Alejandro’s daughter Lucia. She had been diagnosed with leukemia and needed a bone marrow from a close relative, more importantly her sibling.

☑ Alejandro and Gabriela then get married and all of the other couples in the series wind up with happy endings.

☑  Antonia is left to suffer her paralysis at home with nurses that make fun of her state by smearing makeup on her in a rugged and awful manner without. All this without the attention if her new found love Rodrigo Balmacelda.

The Boss generally has a happy ending as we would mostly expect from telemundo series. We hope you enjoy the series while it last.