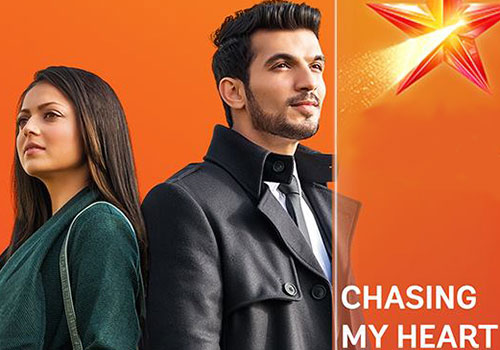 Chasing My heart is a new series premiering on Starlife channel by February 16th. It’s a story about Naina and Raghav; and it will replace Forever Yours. Here are the March teasers…

Naina and Raghav love story takes on a new angle with the revelation of hidden truths and the complication of a surrogate pregnancy, will the couples survive it all?

Episode 23
Madan gets Veer arrested when he refuses to marry Naina. Dadi decides to call off Naina’s wedding with Veer. Later, Naina is in shock when she discovers that she is hitched to Raghav!

Episode 24
Rajiv and his wife confront Sudha. Veer tells Naina that he never loved her! Later, Naina learns about Raghav’s deception too.

Episode 25
Naina is upset with Dadi for getting her married to Raghav. Chanchal stops Naina from revealing the truth to her mother. Dadi whips Veer and tells him to leave the house.

Episode 26
Naina confronts Raghav for deceiving her. Later, she learns a shocking truth about Raghav!

Episode 27
Naina returns the jewellery to Sudha. Raghav confronts Veer for his misdeeds. Meanwhile, a stranger warns Naina about the blizzard.

Episode 28
Naina treats Raghav’s wounds after he saves her from an accident. Later, on Asha’s request, Raghav agrees to attend the dinner at Rajiv’s house.

Episode 29
Rajiv tells Chanchal that Raghav works as a servant in Mehra House. Meanwhile, Indu wants to make changes to her will.

Episode 30
Rajiv clicks Raghav and Sanjana’s photograph and shows it to Naina. Meanwhile, Parmeshwari tells Indu that Sanjana is pregnant!

Episode 31
Naina leaves the house thinking that Raghav has an illicit relationship with Sanjana. Raghav makes a request to Indu. Can he win Naina’s trust?

Episode 33
The police arrest Indu after Rajiv sues her for harassing Naina. Indu has some strong advice for Raghav about Naina. What will Naina do now?

Episode 34
Raghav takes the blame for Asha’s health, while Naina turns against him. Will Naina testify against the Mehras in court?

Episode 35
Naina learns that Ira had told her mother about Raghav. Meanwhile, Naina saves Raghav from an accident. Can Naina bear to see Raghav being insulted by others?

Episode 36
Sanjana replaces the medicine in Raghav’s bottle with alcohol. Later, a drunk Raghav apologises to Naina, who tells Indu about finding alcohol in the bottle of medicine.

Episode 38
Raghav and Naina apologise to each other. Later, Sanjana confronts Naina and makes a shocking revelation to her!

Episode 39
Naina decides to expose Sanjana’s fake pregnancy. Meanwhile, Indu hands over the responsibility of the business to Veer, who delivers the presentation prepared by Raghav.

Episode 40
Indu scolds Veer for his misdeed against Raghav. Later, she asks Raghav to take Naina on a romantic dinner date. Will he agree?

Eposode 41
Raghav and Naina go on a date to a Chinese restaurant. However, Raghav leaves the dinner midway. Why?

Episode 43
Naina reveals to Raghav that Sanjana is not pregnant, but he refuses to believe her. She leaves Mehra House. What she does next leaves Asha stunned.

Episode 44
While Chanchal and Rajiv hide the money from their family, Indu tries to convince Raghav not to divorce Naina. Later, Naina seeks Raghav’s help

Episode 45
Chanchal delivers her baby by the roadside as Raghav’s car breaks down. Meanwhile, the police arrest Rajiv! Why?

Episode 46
Rajiv blames Raghav for lying when he testifies against him. Later, Naina assures Asha that she will get Rajiv released from the prison. Can she?

Episode 47
At Indu’s insistence, Raghav requests Naina to return to attend Veer and Sanjana’s wedding. But, Naina puts forth a condition. Will Raghav agree?

Episode 48
Raghav desperately wants to bail Rajiv out. Naina overhears Balraj’s conversation about Rajiv and decides to tell everything to Indu.

Episode 49
Raghav’s desperate attempts to get Rajiv out of jail go in vain. Further, Naina gets her chance to hit back at Veer. Later, Naina accidentally ends up in Raghav’s car!

Episode 50
Naina drinks alcohol to keep herself warm. Parmeshwari and Sudha scold Sanjana for revealing about her fake pregnancy to Naina. Raghav takes a drunk Naina to the Mehra house.

Episode 51
Naina plans to find out if Parameshwari is involved in trapping Rajiv. Raghav tells Naina that he has deleted her video from his phone. Later, Sanjana insults Naina when she gets mehendi applied on her hands.

Episode 52
Indu slaps Veer for trying to molest Naina. However, Sanjana puts the blame on Naina and accuses her of trapping Veer!

Episode 54
Raghav lies to Veer that Naina has committed suicide in order to make him admit his misdeed against Naina. Will Veer confess?

Episode 55
Raghav asks Veer and Sanjana to apologise to Naina. Meanwhile, a stranger open fires at everyone in the market and points a gun at Sanjana!

Friday 22 March 2019
Episode 57
Naina returns home. She decides to bake a cake for Raghav, while Veer confronts Sanjana for blackmailing him.

Episode 59
The videographer who shot Dadaji’s last moments gives the video clip to Naina. Does the clip have something vital related to his death?

Episode 60
Raghav makes a cake for Naina. Later, Indu learns a shocking truth about Sanjana from her doctor!

Episode 62
Naina returns home. She decides to bake a cake for Raghav, while Veer confronts Sanjana for blackmailing him.

Episode 64
he videographer who shot Dadaji’s last moments gives the video clip to Naina. Does the clip have something vital related to his death

Wednesday 27 March 2019
Episode 65
Raghav makes a cake for Naina. Later, Indu learns a shocking truth about Sanjana from her doctor

Episode 66
Indu lashes out at her family members for lying to her about Sanjana’s pregnancy. Raghav asks Naina to meet him at the court. Why?

Episode 67
Naina confronts Raghav for asking her to leave him. The Mehras stand stunned when Indu takes a big step!

Episode 68
Naina and Raghav decide to start afresh and leave the Mehra Mansion. Meanwhile, Veer refuses to marry Sanjana and makes a shocking revelation about her.

Episode 69
Naina challenges Sudha that she will make Raghav wealthier than the Mehras within a month. Meanwhile, Raghav decides to market the electronic mop that he has invented. Will Naina support him in his plans?

Episode 70
Raghav presents his product brilliantly but will the client accept it? Later, Sudha sends a rogue to attack Raghav and Naina!

Episode 71
Naina rejoices when she discovers that Raghav has changed his mind. Meanwhile, Veer and Balraj get into a heated argument.

Episode 72
Raghav is stunned to learn that Balraj has sold his patent to Mr Khurana. At Raghav’s insistence, Naina signs the divorce papers!

Saturday 16 February 2019
Episode 1
Meet Naina Batra, a strong-willed woman whose journey abroad takes an unprecedented turn as she tells her story to a judgemental fellow passenger. Leaving her sick mother alone was never easy for her, but circumstances led her to take a bold decision.

Episode 2
Naina tells the lady passenger about an incident regarding her mother and how it led her to contact Raghav Mehra. Now, Naina is going to Austria in the hope of meeting Raghav.

Monday 18 February 2019
Episode 3
Naina arrives at the airport in Austria, however neither Rajiv nor Amit are there to pick her up. She goes to Amit’s house but is in for a shock. Meanwhile, she meets Raghav!

Episode 6
Naina sells her ring at the pawn shop to pay the rent to Rajiv’s landlord. Rajiv suggests that she finds a job. Later, Raghav comes to the same pawn shop. Will he purchase Naina’s ring?

Wednesday 20 February 2019
Episode 7
Naina works as a waitress at a night club to pay for her expenses. Later, Raghav reaches the club to bring a drunk Sanjana back and is shocked to see Naina there.

Episode 8
Sanjana accuses Raghav of taking advantage of her. Dadi throws Raghav out of the Mehra House. Later, Naina saves Raghav from an accident.

Thursday 21 February 2019
Episode 9
Chanchal falls unconscious after Veer’s car hits her. Later, Raghav properly introduces himself to Naina. Is Chanchal just pretending to be unconscious or is Veer really in trouble?

Episode 10
Sudha apologises to Rajiv on Veer’s behalf and offers to compensate. Naina withdraws the case against Veer but confronts Rajiv.

Friday 22 February 2019
Episode 11
Mrs. Mehra is impressed by Naina and learns about her problems from Raghav. Meanwhile, there is a sudden turn of events. Later, Mrs Mehra makes a solemn promise to Naina’s family!

Episode 12
Veer refuses to marry Naina. Meanwhile, Naina is shocked when Indu advises her to marry Veer. She confides in Raghav that she doesn’t want to marry Veer.

Episode 14
Naina agrees to go on a date with Veer on Indu’s insistence. Raghav takes a family photograph of the Mehras. Later, Naina tells Veer about her job as a waitress.

Monday 25 February 2019
Episode 15
Raghav is shocked to find the Mehras at the club, where Naina works as a waitress. Veer tells the family about Naina’s profession. However, unlike others, Indu praises Naina for her honesty. Later, Veer lies to Raghav.

Episode 16
Sanjana apologises to Raghav and asks him to be her friend. Chanchal is disappointed when Veer sends Raghav to take Naina for an outing. Later, Balraj gives a business offer to Rajiv.

Tuesday 26 February 2019
Episode 17
Naina and Raghav go on an outing. Veer tells Rajiv the reason for agreeing to marry Naina. Will Rajiv reveal the same to Naina?

Episode 18
Chanchal hides the truth about Veer from Naina. Raghav requests Veer to take Naina out for lunch. Later, he sends an apology message to Naina from Veer’s phone.

Wednesday 27 February 2019
Episode 19
Naina and Veer go on a lunch date. However, she is shocked when Veer asks her to sign a document. What is it and will Naina sign on the dotted line?

Episode 20
The Mehras are shocked when Indu transfers the property and the business empire into Naina’s name. Later, Indu fixes Veer and Naina’s marriage date!

Thursday 28 February 2019
Episode 21
Chanchal hosts the sangeet ceremony. Sanjana tries to get intimate with Veer, but Dadi butts in and asks Veer to join the others. During the event, Dadi slaps Raghav for dancing with Sanjana and asks him to leave the house. Later, Parameshwari encourages Veer to elope.