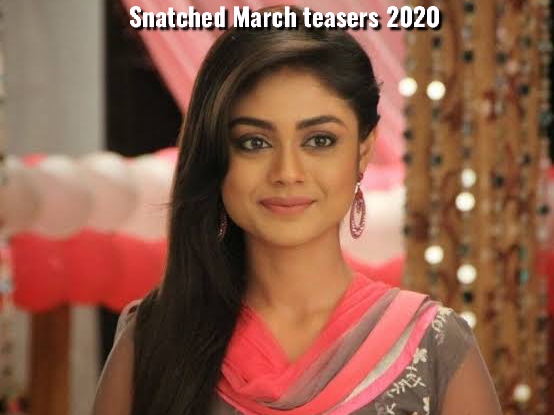 Snatched March teasers 2020: There is a murderer in the Pethewalas family! Shreya is thinking about commiting suicide. Ajay and Sanjana are contemplating divorce.

Ilaichi gives her mother’s necklace to Vinati for safe keeping, so that Avani can wear it on her engagement. Shreya’s mother gives her another idea to get Bhushan’s cousins chucked out of the house. Shreya offers to give all the ladies a facial and steals the keys to locker in which Vinati has kept the necklace.

Sanjana’s father comes over. He apologises to Trilokchand and expresses his desire to get Ajay and Sanjana remarried in accordance with the rituals.

The doctor tells the family that Ajay is in a critical condition. Mr Agarwal also arrives and, seeing an opportunity, tries to kill Ajay but fails when Ayush enters with the police.

She tries to save Ajay but gets locked up by her father. Back at Pethawala house, Shreya finds out about Ajju and Sanjana’s relationship through Sanjana’s social media account.

Shreya puts up an act in front of Sanjana about being a changed person. Sanjana is happy as things are falling into place. Rishabh stops by to meet Avani and her family and tells them that he will cook for them.

When Ajay leaves for the interview, she finds a CD of his dream project. Sanjana confronts Ajay about his dream but Ajay doesn’t want to stir trouble any more so he breaks the CD.

Her father encourages her to get Ajay to realise his feelings. On the other hand, Trilokchand asks Ajay to divorce Sanjana. Later in the day, Trilokchand tells Amar about his decision to let Ajay join the family business.

Unaware of Shreya’s true intentions, Vinati talks to Ilaichi. When Ilaichi and Shreya are out grocery shopping together, Shreya poisons Ilaichi’s mind against Vinati.

Shreya is frustrated about not being able to instigate Ilaichi against Bhushan’s cousins. Ajay almost raises his hand to Sanjana for her constant refusal to sign the divorce papers.

Vinati plans on enrolling Samar to a new international school because the kids of wealthy families study in that school. Grandma tries to change Vinati’s mind, but Vinati is relentless. Sanjana calls Ajay to inform him that she has signed the papers and is waiting outside to hand them to him.

Sanjana hands overs the divorce papers to Ajay. Ajay feels sad at the thought of being separated from her. At the Pethawala’s, the family discovers Amar and Vinati’s plan to renovate their room.

Vinati gets worried about Ilaichi as she hasn’t eaten or drunk anything. Trilokchand reluctantly accepts Ilaichi’s condition. He announces that everything will be partitioned including people of the house.

He decides to stay with his nephews and niece, leaving Ilaichi to stay with their children. Everyone, except Shreya, is upset.

At the Pethawala House, Ilaichi scolds Mishri for dancing but Ayush defends Mishri and informs Ilaichi about him moving to Germany and staying there for next five years for advanced boxing training.

He asks Ilaichi for her blessing but she refuses and goes to her room where she cries inconsolably. Ayush leaves for Germany.

The family gets united once again.

Ajju shows his and Sanjana’s wedding card to Sanjana who tries to tell him the truth but Ajay gets a call and both Ajay and Sanjana leave for hospital. At the hospital, doctors inform everyone that Shreya has gone blind.

Mishri’s naivety gets the better of her and she feels that Ajay and Sanjana are being selfish.

The ring doesn’t fit anyone not even Sanjana which shocks everyone but especially Shreya and Shaina. Trilokchand lets Shaina stay at Pethawala House. Shreya tries to bring Shaina’s attention to the vase that was used to murder Ajju.

Shaina finds Mishri’s footwear and is convinced she is Ajju’s murderer but no one believes her.

Ajay hides the vase in storeroom so no one can find it. Shaina is caught by Shreya while trying to steal some cash and jewellery. Shreya slaps Shaina for it and it turns out Shreya is the one who hired her.

Next morning, Mishri leaves for college but when she reaches there, she drops her passport while getting out of the autorickshaw.

At Pethawala House, Shaina takes out a crystal ball and pretends to figure out details about Ajju’s murderer.

When Trilokchand tries to talk to the police, Shaina reminds him of his promise to get the culprit arrested. Mishri reaches her in-laws house, where Anuj’s behaviour surprises her.

Shaina confesses her feelings to Ajay and vows to makes him hers.

Mr Agarwal tells Ajay how miserable Sanjana is in jail and begs him to save her. Ajay feels he has no option and decides to marry Shaina

So, Vinati lights a fire on traditional stove for Sanjana. Shreya realises that Shaina doesn’t know to cook.

Next morning, Bhushan tricks Shreya into giving a blood sample and gets to know that Shreya is not pregnant.

All the women go in search of Sanjana and find her in the storeroom. On the other hand, Ajay stops the wedding ritual midway and tells Shaina that he won’t go ahead without seeing that Sanjana is safe.