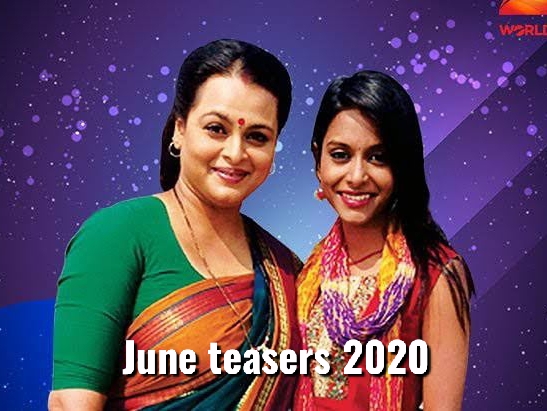 Reach for the Stars June teasers 2020: Pakhi is vindictive and will go to any lengths to separate Raghav and Kalpana, will she succeed?

Kalpana and Kamla take Raghav to the hospital after an accident that took place before their eyes. Upon filling forms, Kalpana fills her name in as Raghav’s wife.

Raghav tells Pakhi about him putting vermilion on Kalpana’s forehead. She pretendsshe is okay with this but later breaks down. Pakhi shows her true colours and declares Kalpana as her enemy.

The story takes a turn when it is revealed that someone trusted by Kamla has been deceiving Kalpi. Kalpana’s business has officially kicked off and everyone is looking forward to a successful result.

Kamla sees the extent to which Pakhi will go to get Raghav’s love. Kamla witnesses Pakhi’s evil side, the sacrifices she has made for her seem to have been in vain. Kalpana and Pakhi declare war over Raghav.

Kamla’s community gets a random visit from men that claim to be officers and want to demolish their business. Kalpana and Kamla find out that Pakhi is the one causing problems for them.

Kamla reveals the truth about Gaury and Pakhi being in cahoots to Raghav, but his response to this is an unexpected one. His faith in his mother seems to have blinded him.

Pakhi asks Raghav to have dinner with her under the pretext that she wants to keep their friendship strong. She then spikes Raghav’s drink to do as she wishes.

Pakhi tries to hurt Kalpana but her plan brings Raghav and Kalpana closer. Pakhi spoils the food that Kamla’s restaurant prepared. Raghav tells Kalpana about the night he and Pakhi spent together.

Kalpana finally gets evidence to prove Pakhi guilty but she gets in the way of the truth being revealed. Pakhi goes to the extreme to keep her secret from Raghav. Kamla begs Pakhi to tell her where she has taken Kalpana but she refuses to do so.

Gaury reveals the truth to Raghav, now their challenge is to find Kalpana. Raghav and Kalpana meet with an accident. Kalpana’s condition leads to reconstruction surgery, the aftermath of the surgery is shocking.

Vithal is devastated and unable to deal with the ordeal he is faced with. Will the family manage to come out of this strong?

Suhana meets Kamla at a temple and feels a strong connection between the two of them. Suhana starts having nightmares and flashbacks of the past. Mr Diwan asks Kamla to work at his house to take care of Suhana.

Suhana finds out that she is engaged to get married. Kamla and the family are struggling to make ends meet, she is forced to work for someone even though her wish is to stay at home.

Suhana meets her fiancé. He soon realises that there is something different in her behaviour. The family makes up a story to ease up his doubts.

Suhana tells Arian that she has lost her memory but he pretends like everything is fine. Manda keeps taunting Kamla’s family.

Dheeraj finds himself constantly working on hiding the secret about Suhana’s identity. Chandini tries to help Suhana remember her past.

Arian’s plans to distance himself from Suhana seem to not work. Dheeraj finds out that Kamla is Kalpana’s mother. Will he manage to keep this secret any longer? Suhana’s father calls off her engagement.

Kamla finds out that Arian was just putting on an act. The cause of Suhana’s death is revealed. Arian returns to the house after realising that he is in love with Suhana.

Suhana refuses to forgive Arian for the mistake he had made. Kamla gets setup, one of the helpers accuses her of a crime she would never commit, she then gets fired for it.

Suhana helps prove Kamla innocent. Dheeraj has run out of ways to keep his secret hidden. Dr Mehta tries tell Kamla the truth but ones again, Dheeraj gets in the way.

Sanjay catches Arian with Suhana and fails to understand that he has indeed changed. He then tells him to leave the house. Arian and Suhana take a life-threatening step to convince her father to allow them to get married.

Next month on reach for the Stars >>>