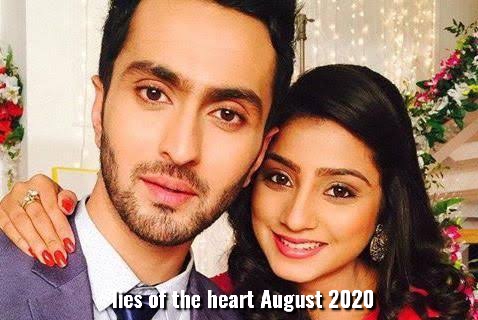 Lies of the heart August teasers 2020: the tides are turning against Samrat and he has another woman under his malicious spell. Is his day of reckoning closer than he thinks?

Samrat makes Urmi dance to his tunes and the worst part is that Ishan knows nothing. Samrat strikes again, this time he forces Ishan to slap Urmi in front of the whole family.

Hemant causes Ishan to loose all control of himself. Urmi has to make one of the toughest decisions of her entire life. Ishan finds out that Shaurya doesn’t have cancer and he rushes to stop Urmi. Will Ishan be able to stop Urmi?

The lab technician that made the fake report comes to the house and he blackmails Samrat. Tani brings Shashi to the house. Thanks to Sandhya, Damini now focuses on getting rid of Samrat.

Shashi informs Samrat of Damini and Sandhya’s plans and when asked about it, both Damini and Sandhya deny it. Samrat along with Shashi decide to fight against Damini. Can the mother and son duo take down Damini?

Samrat goes for coffee with another woman, little did he know that Shashi and Tani were coming to the same place. Asha and Urmi see Gaurav in the sari shop with non-other than his secretary.

Samrat lies to Tani and goes to meet Kiran. Urmi and Ishan finally convince Tani about Samrat. Shashi tries to cover up for Samrat, but this time the whole family is against Samrat. Samrat’s night of fun, turn into a complete nightmare.

Samrat somehow slithers his way out of trouble once again. Urmi makes Asha see that Gaurav is in fact not cheating on her and that he loves her a lot. Tani’s diamond ring goes missing and she starts to blame Rani.

Samrat miraculously finds Tani’s diamond ring. Ishan is worried about the new divorce case he has to handle. Urmi finds a whole bunch of unknown tablets under Shaurya’s bed.

A unknown person follows Samrat and takes photo’s of him secretly. Ishan and Urmi find out that someone in the house wants to intentionally harm Shaurya, question is who?

Urmi and Ishan finally locate Munna and manage to find out who’s trying to harm Shaurya. Samrat goes to meet Kiran once again but this time Urmi and Ishan overhear his entire conversation.

Urmi does what she said she would and adds fuel to the fire between James and Samrat. Samrat arranges for one of the cars to get stolen in order to gather money for James.

Samrat plans to assassinate James with the help of his old friend Veeru, unfortunately for him James is still one step ahead of him. Ishan and Urmi tell the whole family that Urmi is pregnant.

Samrat yet again fools Tani and she offers to give him her savings money. Urmi tries to boost Sandhya’s confidence by entering her in a beauty contest. Samrat finds out that Kiran is actually a fraud.

Samrat has a confrontation with Kiran and James and they reveal why they did what the did. Ishan surprises Urmi with beautiful pictures of her all over the room. Urmi decides to teach Shashi a lesson.

Sandhya wins the beauty contest as Urmi predicted. Shashi and Samrat think of ways to prevent Urmi from exposing them. It seems like after seeing what a good woman Urmi is, Damini finally accepts her.

Samrat turns against his own mother to try and save himself. After her confrontation with Tani, Shashi finds out that Diwakar moved overseas and sold everything in Jhansi. Urmi forces Samrat to dance like she had too.

Shashi finally stands up and puts Samrat in his place. Anirudh finds out that Damini and Samrat worked together. Samrat sabotages Urmi’s car and he states that it will be her last ride. Could Samrat be right?

Urmi drives towards the restaurant when suddenly a bus swerves in front of her and before she can slow down, her brakes fail. Will Urmi somehow survive a fatal car accident?

Ishan attempts to save Urmi from burning in the warehouse. Samrat waits outside the warehouse hoping that both Ishan and Urmi pass on, but as fate would have it, Samrat gets put through the same test. Will he survive?

Samrat confesses in front of everyone about all his deeds. Urmi forgives Samrat but, she tells him that she never wants to see him again. Samrat’s guilt leads to his ultimate demise.

Twenty years later Shaurya wins an award. Urmi’s daughter Ishani gets influenced by Damini in a very negative manor and as a result she wants nothing to do with Urmi. Urmi discovers something very shocking about Rashmi.

Ishani shares the news of her getting selected to study at a fashion institution with everyone, except Urmi. Diya’s curiosity leads to her finding out some dangerous information about Jamdar’s case.

Shaurya realises his mistake and he apologises to Diya. Gaurav tells Urmi that he wants to take care of Rashmi’s daughter. Shaurya still finds it difficult to cope with Ishan’s death.

Ishani decides that she wants to get married and she asks Damini to look for suitors for her. Karan runs his mouth off once again but, this time he messes with the wrong people. He puts both him and Diya’s life in danger.

Karan lies and fakes being seriously injured as part of his cover-up story. An anonymous person sends pictures of Diya’s incident to Shaurya. Diya’s family refuses to let anyone else see Diya, including Shaurya.

Nirmala tries to poison her entire family. Diya locks her room and refuses to let anyone in. Shaurya tries his best to make Diya snap out of her state and open up the door. Can Shaurya’s love and affection give Diya new hope?

Diya’s parents try to stop her from lodging a police complaint. At the police station the inspector gives Diya and Shaurya a hard time, that is until Urmi gets there. Diya returns home only to find out that her family disowned her.

Diya’s parents throw her out the house and Urmi offers her a place to stay. Karan goes to to see Diya but, the real reason for his sudden visit is still unknown.

Shaurya goes to collect the clothes they require – unfortunately Diya’s mother sets the clothes on fire. Just when it seems like all hope is lost, the inspector calls and asks Diya to identify suspects at the police station.

Damini creates a scene at the house prayer. Diya identifies the attackers by means of a sketch artist. One of the attackers calls home and Ishani answers. Shaurya’s obsession with Diya’s case creates a rift between him and Ishani.

Damini takes full advantage of Ishani’s mixed emotions of Shaurya, not knowing Anirudh heard it all. The police capture the three men who attacked Diya. Will Diya finally get her justice?

Next month on lies of the heart