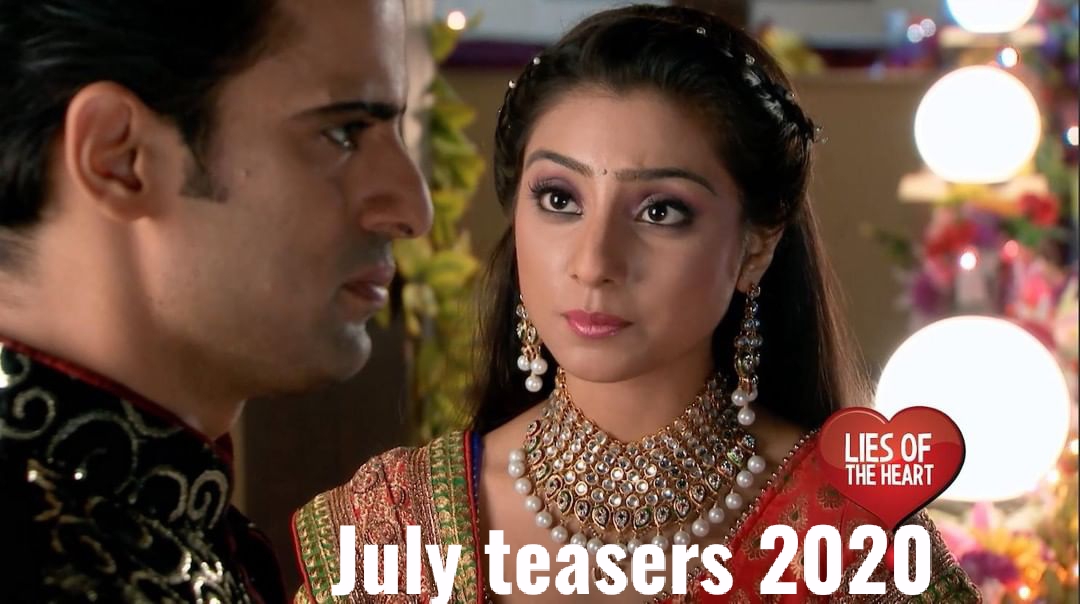 Lies of the heart July teasers 2020: Samrat has lost all his properties and Urmi is getting a fresh start, fate brings them together once more and a new game begins.

Urmi and Ishan manage to make complete fool out Samrat and Niranjan in court. Ishan tells Urmi that, the only way to win Shaurya’s custody is to show Samrat’s true nature. Somehow Niranjan saves Samrat from being trapped.

Samrat plays a dirty underhanded trick by threatening Shaurya to lie in court. Shashi goes behind Samrat’s back and sells the mansion. Shashi sees Radha has a wedding chain on.

Mukti meets Urmi secretly and he tells her who Radha is. Samrat manipulates Radha into thinking that Urmi is a bad person. Radha goes to confront Urmi and as a result Urmi and Ishan now have something huge against Samrat. What could it be?

Ishan goes in undercover to try get more information on Radha and Samrat’s relationship. Mukti tells Urmi and Ishan about the CCTV cameras all over the house. Kanchan finds out about Radha’s feelings for Samrat.

Just when it looked like Ishan and Urmi have lost the case, Radha and Kanchan appear in the court room. Gaurav presents all the CCTV footage as evidence. Shashi learns that the so-called money she was paid is fake. What will she do now?

Samrat burns down Mr and Mrs. Tiwari’s house and gets punished. 6 years down the line, Shaurya wins a student of the year award and we get introduced to Ishan’s parents.

Devishankar gives Samrat a taste of his own medicine. Ishan’s parents make it clear to him that, he can get married to any woman, just not widows or divorcees. Gaurav encourages Ishan to tell Urmi how he feels about her.

Samrat walks around to explore Mumbai and unknowingly, he comes across Urmi’s restaurant. Urmi finds out about Ishan’s monthly flower bill and strangely enough it is the same flowers that get delivered to her every morning.

Samrat pursues Sanaya, not knowing that Sanaya is friends with Urmi. Damini tells Urmi to stay away from Ishan. Ishan spots Samrat in Mumbai and he tells Gaurav. They both decide not to tell Urmi. For how long can they keep it a secret?

Samrat’s plan to trap Sanaya works, only thing is, he finds out that Urmi is her best friend. Damini and Sandhya witness first-hand how Ishan asks Urmi to marry him. Sanaya sends Urmi a pic of Sam. How will Urmi react to the pic?

Urmi travels to GOA to urgently to warn Sanaya about Samrat. Damini goes to Gaurav and threatens him to make Urmi stay away from Ishan, or else… Urmi saves Sanaya in the nick of time from falling into Samrat’s trap.

Samrat gets a call from one of the moneylender’s henchman, reminding him that time is almost up. Ishan manages to convince Anirudh about his marriage with Urmi. Shaurya makes it clear to Urmi that he wants Ishan to become his father.

Samrat’s spy is Urmi’s new driver. Damini tries to create a misunderstanding between Shaurya and Urmi. A new man comes to Urmi’s Haldi ceremony named Sundar and it’s clear that he came with a hidden agenda.

Sundar manages to frame Urmi, little dies he know what is about to happen next. Samrat comes face-to-face with Ishan and he tells him about the special gift he has planned for their wedding. What could this gift Samrat has be?

Asha leaves Urmi alone for a few minutes, just then the power cuts off and Urmi is left screaming. Ishan risks his own life to save Urmi. Samrat arrives and he makes sure that Urmi and Ishan’s wedding becomes very unforgettable.

Samrat stages a fake robbery in order to spoil Urmi and Ishan’s wedding night. Samrat realises that Damini and Sandhya also don’t like Urmi. Samrat manages to play mind games with Urmi and the news of his marriage spreads.

Samrat arranges for Urmi’s drink to be spiked and on top of that, he still tries to manipulate Damini’s mind. Urmi goes to confront Samrat and she promises that he will be out the house within the next 24 hours. Is Samrat’s time up?

Samrat tries to sabotage Urmi’s cooking ritual, luckily Urmi outsmarts him. Samrat somehow gets into Anirudh’s good books. It turns out that Urmi and Anirudh formulated a plan to expose Samrat. Will their plan succeed?

Ishan and Urmi spoil Samrat’s plans of not going to Jhansi. Samrat promises Urmi that he will return in time for Holi. Damini gets suspicious as to why Ishan and Urmi aren’t going on a honeymoon. Samrat and Shashi manage to fool Tani.

Samrat bumps into a blast from the past, Niranjan Khanna. Ishan tells his father the truth. Samrat still manages to instigate Damini against Urmi. Damini somehow creates a misunderstanding between Ishan and Urmi.

Urmi finds the slip of the dress Ishan bought. Damini continues to make the situation between Urmi and Ishan worse. Samrat hires a hitman for his own twisted and selfish reason. What could he be planning?

Samrat’s hired-gun does his job and Tani ends up in critical condition. The rift between Ishan and Urmi gets worse after hearing of Tani’s accident. Shashi overacts and as a result she spoils all of Samrat’s plans.

Samrat decides to get rid of Niranjan once and for all. Samrat overhears a conversation between Urmi and Niranjan. Damini strikes again, this time she makes Ishan believe that Urmi is deliberately making him food spicy.

Sanaya come up with a plan to force Urmi to confess her feelings for Ishan. Just when it looked like Urmi and Ishan were finally going to solve their differences, Samrat returns. Does Samrat’s return spell more trouble for Urmi and Ishan?

All Samrat and Damini’s efforts go in vain as Urmi and Ishan reunite and Urmi confesses her love for Ishan infront of everyone. Samrat traps Ishan to ensure that him and Urmi don’t get to spend the night together.

Samrat manages to fool Tani once again into thinking that it was Urmi who tried to get him killed. Samrat is at it again, this time he convinces Tani to ask her dad to buy him a hotel. Will Anirudh agree?

Samrat plans to injure Urmi and Ishan, little did he know that they are actually on their honeymoon. Damini calls Urmi and tells her that Shaurya isn’t feeling well as part of her plan to spoil the honeymoon.

Damini plan to cut Urmi and Ishan’s honeymoon short, is 100% successful. Urmi and ishan hear from the doctor that Shaurya has bone marrow cancer. Samrat makes everyone believe that his worried about Shaurya.

Ishan reveals that in order to save Shaurya, Urmi would have to conceive another child from Samrat. Tani makes Samrat promise not to fulfil what the doctor said.

Ishan and Urmi decide that they’ll do whatever it takes to save Shaurya. Samrat shocks everyone when he makes it clear that he will never be unfaithful to Tani. Damini plans to get Ishan remarried once Samrat falls into her trap.

In order to save Shaurya, Samrat tells Urmi to obey his every command. Urmi finds out that Samrat spoke to Shaurya about his illness and she gives him a befitting reply. Anirudh manages to calm Shaurya down.

Next month teasers on lies of the heart