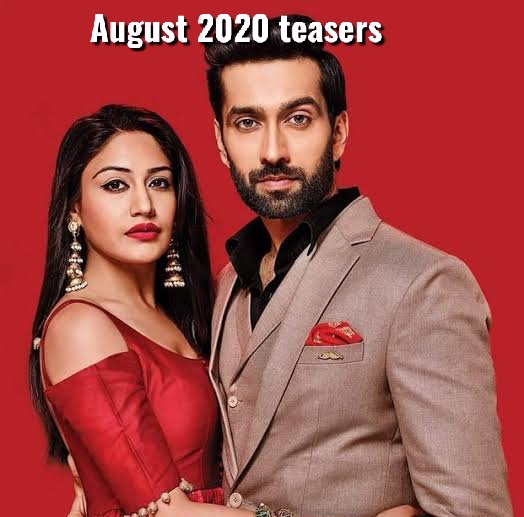 Game of love August teasers 2020: Shivaay tells Anika of his plan to expose the traitor in the house, who is behind Nayantara’s arrival. Will Pinki get caught?

Shivaay gets beaten up by goons when he comes in search of Ranveer. Mahi rescues Shivaay! Will Shivaay learn about Mahi’s true nature?

Pinki complains to Shakti that Shivaay loves Anika more than he loves her. Shivaay’s behaviour makes the situation worse!

Pinki is upset with Anika as Shivaay gives her all the credit. Meanwhile, Anika tries to find out about Shivaay’s lookalike.

Anika finds Mahi and confronts him while Pinky insists on knowing Anika’s background from Shivaay. Unable to provide an answer, Shivaay is in a dilemma.

Anika is curious to find out Mahi’s motive in rescuing Shivaay. Meanwhile, Anika has something shocking to tell Shivaay.

Shivaay tells his brothers that he wants to know about Anika’s family background. Anika becomes furious on hearing this and leaves the mansion. Will they reconcile?

Shivaay visits an orphanage to find out about Anika while Anika heads to a hospital. What is she about to discover?

On learning that Mr. Bajaj brought Anika to the orphanage, Shivaay assumes that Anika is his grand-daughter. Is she?

On learning about Anika’s miserable past, Shivaay is determined to ensure that she has a good life from here on. Meanwhile, Pinki bribes the warden of the orphanage with evil intentions.

Anika awaits the DNA test result to know whether Shivaay and Mahi are brothers. She confronts Shivaay for spying on her. Later, things get ugly, when a blunder by Anika lands them in deep trouble.

Anika and Shivaay break into a house and spend some fun time inside. Later, they hear a radio announcement. Are they in trouble?

Some criminals hold Anika at gunpoint. Anika tries to inform Shivaay that she is in trouble. Will she succeed?

Shivaay refuses to perform the puja. Later, Anika receives a call about the DNA report, while Pinky hatches a heinous plan against Anika.

Mahi tells Anika that Pinki is not Shivaay’s mother leaving her shocked. Meanwhile, at the press conference, a bar dancer, Nayantara, introduces herself as Anika’s mother!

Anika decides to bond with Nayantara but is left perplexed after the meeting. Will she find out the truth about Nayantara?

Anika asks Nayantara the reason why she abandoned her. Nayantara tries to mislead her. Will Shivaay and Anika find out Nayantara’s true identity?

Nayantara passes Shivaay’s tests that she is Anika’s mother. Before the final word, Shivaay arranges for a DNA test on Nayantara.

Though Pinky destroys the reports, Shivaay gets the copy from the doctor. Pinky humiliates Nayantara while Ranveer tries to win Priyanka’s trust.

Anika is shattered to know the DNA test result. Later, Shivaay brings Nayantara home. What makes him confront her?

Anika learns that Shivaay is lying about Nayantara. Will she find out why?

Rudra saves Shivaay and Omkara from the explosion. Later, fake Svetlana puts Gauri’s life at risk and blackmails the Oberois.

Shivaay brings Gauri home and scolds Omkara for not informing him about his marriage. Later, the Oberois conduct the ring ceremony of Shivika and OmGauri.

The Oberois perform a ritual, while Shivaay tells Anika of his plan to expose the traitor in the house, who is behind Nayantara’s arrival. Will Pinki get caught?

Anika is shocked learning who is behind Nayantara’s arrival. Gauri tries to skip writing her name in the ‘Kul Pathri’. Will Anika reveal the truth to Shivaay?

Pinki puts up an act to malign Nayantara. Shivaay lashes out at Anika for accusing Pinki. Meanwhile, Rudra meets Bhavya!

Pinki tries to portray Anika in a bad light by instigating her to add a toxicant. Meanwhile, Rudra falls in love with a gorgeous Bhavya. Who is she?

Omkara and Shivaay thrash Ranveer, while Priyanka pleads them to stop. Shivika share an emotional moment while Pinky strikes a deal with Kamini.

From the CCTV footage, Anika learns that Pinky is the culprit. Priyanka tries to meet Ranveer while Pinky blackmails Anika.

Pinki orders Anika to leave the house, within three days or else! Later, Gauri, along with Omkara, tries to reunite Shivaay and Anika.

Shivaay plans to spend some romantic time with Anika. Pinky reminds Anika to go away from Shivaay’s life. What will Anika do?

Shivaay and Anika share an intimate moment. Later, Anika breaks down as Pinki reminds her of the deal. Will Anika find a solution?

The Oberois worry when Anika goes missing from the sangeet. Later, Shivaay addresses the press about Rudra and Bhavya’s marriage. Are they married?

Shivaay wants to spend a romantic time with Anika. Later, he is surprised to see the change in Anika’s behaviour. What could be the reason?

To spoil her image before Shivaay, Anika intentionally stops him from transferring the property share to Omkara and Rudra. Will she succeed?

Omkara and Rudra learn that Shivaay is Kamini’s son. Anika refrains them from revealing the truth to Shivaay while consuming alcohol.

Drunk Anika falls asleep before reveaingl the truth to Shivaay. Next day, Shivaay plans a surprise which Pinki wants to ruin. How will Anika face Shivaay?

Shivaay has a surprise for Anika. However, Anika behaves rudely with him while Pinki rejoices to see her plan working.

Shivaay throws Anika out of his house. They feel distressed, recalling each other. Will Shivaay learn the truth behind Anika’s actions?

Anika tries to hide after she spots Shivaay with Sahil. Suddenly, Shivaay suffers from a heart attack. How will Anika help Shivaay?

The story takes a leap. Omkara is in coma. Tej decides to let him die while Shivaay is determined to continue his treatment. Will Omkara recover?

Shivaay and Rudra get emotional while thinking about Omkara. Kamini plans to create a rift between Ranvir and Priyanka. Will she succeed?

Ragini puts up a drama to trap Shivaay. Kamini tries to create conflict between Ranvir and Priyanka while Bhavya hides the truth from Rudra.

Ragini puts up a drama in front of Shivaay. Kamini provokes Ranvir against Priyanka. Shivaay is surprised to see Omkara recovered from coma.

Shivaay gets beaten up by goons and Anika senses him to be in danger. Later, Anika meets Samar Malhotra and gets a job.

Anika dresses up as the bride and manages the situation in Chanda’s absence. Kamini plans to prove Priyanka mentally unstable. Why?

Shivaay lashes out at Anika on believing that she is getting married. Later, Shivaay gets arrested. Why?

Rudra and Omkara blame Pinki for ruining Shivaay’s life. Shivaay gets a shock when Anika returns and claims to be the owner of the house.

Ragini tells her brother that she loves Shivaay. Anika promises Omkara and Rudra to bring Shivaay back to his old self.

Anika tries to make Shivaay jealous by pretending to call Rohit. Will he react to Anika’s antics?

Anika realises that accepting Pinky’s proposal was a mistake. Omkara-Gari and Rudra-Bhavya decide to reunite Shivaay and Anika.

Anika calls Mr. Malhotra for a metting. Shivaay overhears their conversation and plans to spy on Anika!

Two episodes today and then one longer episode airs a day.

As per Rudra’s plan, Anika puts up an act. Later, Shivaay decides to get engaged to Ragini.

After his project gets rejected, Maan decides to work at a construction site to feed Geet and himself. However, to his surprise, Geet organises for dinner. Will Maan overcome the rejection?

Anika, Gauri, and Bhavya repent for misunderstanding their husbands. Shivaay, Omkara and Rudra find an anonymous baby in their house and are eager to know about his father. Who is it?

Anika, Bhavya and Gauri plan to spy on their husbands. Anika and Shivaay confront each other while Omkara shares his feelings with Gauri. Omkara puts Bunty in a laundry basket. Anika carries it to the laundry.

The Oberoi brothers decide to accept the baby, Bubbly as their daughter, while Tej and Svetlana conspire against Janhvi. Someone is attempting to attack Shivaay under Ragini’s guidance.

In search of the baby, a few miscreants enter Oberoi Mansion and attack ShiOmRu. Bhavya and the Oberois fight the goons and rescue the baby.

Tej attempts to kill Svetlana and Janhvi. Tej becomes unconscious after Janhvi hits him. Janhavi and Svetlana deal with the police and head to the graveyard.

Shivaay and Anika’s relationship turns hostile, while Rudra and Omkara strive to bring them closer. Shivaay accidentally meets Tia, and later confronts Anika about the past incident.

Shivaay handcuffs Anika and plans to give her bhaang to get the truth out. Shivaay tries to recall Anika’s confession.

Next month on game of Love