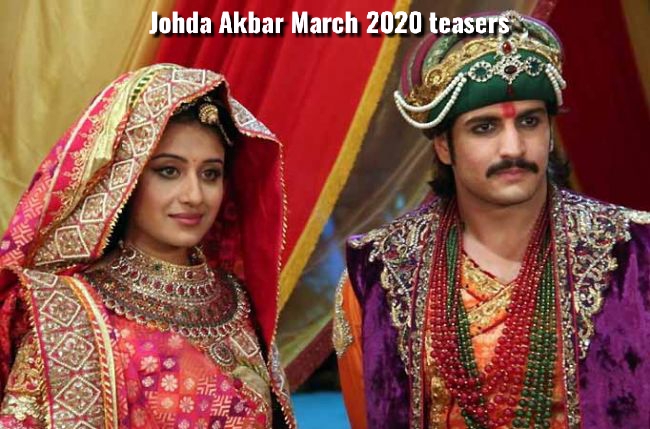 Johda Akbar March teasers 2020: Johda begins her journey of fighting for her right and gaining her husband’s love and respect in the Palace.

The story of princess Jodha, who is forcefully married to a hard-hearted king who conquered her father’s kingdom. She reluctantly goes to his palace only to find that she is one of many wives. She faces opposition from the word go and discovers that she will have to fight for her husband’s affection. Her intents later shifts from hatred towards the king, to trying to soften him and change him from being a vicious ruler to a compassionate one.

Jodha, the daughter of Bharmal, is kind at heart. Jalal, under the guidance of Bairam Khan, Jodha goes to temple on her birthday. The Moghul army attacks the temple to rob it.

Jalal enters the Amer’s festival in a disguise. During the celebration, Jodha sees Jalal and can’t forget his face.

Mainavati prepares for Jodha and Suryabhan’s marriage. Maham Anga tries to create a rift between Jalal, Ruqaiya and Bairam. Sujamal joins hands with Shariffuddin.  Mainavati tells Jodha about her future prediction and her concern.

Jodha reaches Suryabhan’s house on the way to Mathura for the festival. Maham Anga wants Adham, her son, to get the minister’s position.

Jalal gets Jodha’s painting done and sets it on fire. A rift is created between Bairam Khan and Jalal.

Jodha and Ruqaiya cross each others way. Bairam Khan leaves for pilgrimage as Jalal declares him a rebel. Jodha’s mararige preparations are on. Maham Anga successfully makes some moves to get the minister’s position.

Jodha agrees to get married for the safety of Amer. Rajput kings are stunned to know about Jodha’s marriage with Jalal.

Jodha is happy to see his brothers back. Jodha is stunned to know Jalal and her are married. Maham Anga comes with a bridal dress for Jodha and she sets it on fire., Maham Anga leaves in rage.

Maham Anga tries to implicate Jalal for Jodha’s act. After some arguments with her parents Jodha agrees to marry Jalal.

Jodha receives a grand welcome by Hamida, Jalal’s mother. Ruqaiya tries to dominate Jodha, but she gives her a fitting reply.

Ruqaiya is happy to know that Jodha is not interested in Jalal. Jalal tells Jodha that he too hates her and he married her for revenge, he doesn’t miss a single chance to insult Jodha.

As per the customs, Jodha was made to cook for king.

Jodha is stressed about Jalal’s condition. Ruqaiya is pregnant.

During the celebration Jodha gives saffron milk to Ruqaiya and the child is aborted, and the doctor suggests conspiracy.

Meanwhile, Shekhar plans an attack on Anurag’s employee and hires Jagan for the same.

Jalal receives a complaint about Sujanpur’s king and he decides to attack Sujanpur.

Jodha confess that she had committed the crime. Ruqaiya informs Jalal that it was Salima’s ruse.

Rahim tells Jodha that he saw Maham Anga adding something to the saffron.

Jodha brings Rahim as her witness but fails to prove anything.

From a sketch, Jalal comes to know that it is Maham Anga’s ruse.

Next: Next month highlights on Jodha Akbar