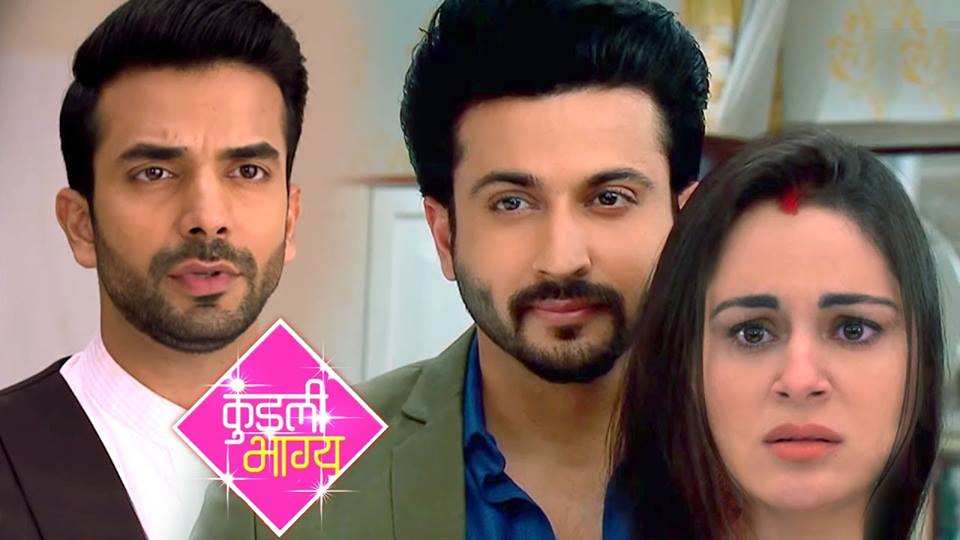 SATURDAY 12TH JANUARY ON THIS IS FATE

Karan smirks as Preeta tells him to follow her in the hotel. She looks towards him and asks if he already got the room number? He nods. Karan shuts her mouth as Sherlin might hear this. Preeta asks how he got the room number. Karan says he found a lady and recalls stealing her purse.

He goes to reception and asks about the room number of Sherlin Khurana., he has to return her purse. The receptionist asks Karan for a kiss; Karan says then she must tell him on whom name is it registered? Karan kissed the back of girl’s hand, the room was 402 and the room was registered after a company’s name. In the room, Sherlin tries to provoke her ex-husband. Preeta asks Karan if he is going to room 402.

Karan asks if Sherlin would be waiting for them and open the door so easily? They go to place their ears with the door, trying to hear someone speaking from inside. Instead, they share an eye lock. There, Deepak was waiting for Preeta. He was curt that she has been away for hours now. He thinks it was his mistake, when she slapped him he shouldn’t have left but slapped her in return. She must accept him as her fiancé, he can’t let her wander freely in the streets of Mumbai.

He gets an idea and thinks he will surely enjoy the game now. Preeta says they must call Rishab here. Karan wasn’t ready as Sherlin must have won Rishab’s trust. Sherlin would tell Rishab that it was only a misunderstanding. Everyone would get suspicious about them. Karan says they must gather a proof. Preeta says they have to either take photos or video recording of them two. They have to get into the room and suggests about climbing a window. Karan asks if she considers him a circus player, he can’t take this risk.

Preeta says she must think about something else. In the room, Sherlin tells her ex-husband that Preeta suspects her. He tells her that no one has been able to catch them till date, he will handle Preeta. Outside, Preeta gets an idea. Karan tells her to keep her ideas to herself, she either turns him to superman or a batman. He finds a cleaning lady, she signals towards Preeta and says he will indulge the girl and she must take the master key. Preeta denies committing any theft. He hushes her up and assures she will do it.

Preeta poses to be busy with the phone while Karan takes the girl to open his room door. Preeta goes to take the key. The girl turns to bring a master key. Karan begins to flirt with the girl saying she must work as model. Preeta finally finds the master key and signals Karan by moving her hand. All of a sudden she drops a bucket. The girl runs towards Preeta and calls security. Karan holds Preeta’s hands and run from there. They hide under the staircase. Karan blames Preeta for dropping the key. Preeta apologizes and says she can’t handle such situations. Karan goes to use his last armament.

Karan tells Preeta he is going to put hotel on fire so that Sherlin comes out of the room. Preeta says this is dangerous, it might affect everyone in the hotel. Karan climbs a stool and uses a lighter to allow fire alarm ringing. Preeta realizes he was only joking with her. The fire alarm rings. Sherlin was afraid as this shows a fire in the hotel. The water begin to drop off the hotel roof.

Preeta attempts to run behind, Karan holds her. they share an intense eye lock. Sherlin and her husband had left the room already. Karan and Preeta go to see the phone recording. Preeta slips in the corridor, Karan in an attempt to save her also fell down. The security had reached to catch them. Karan takes his phone and runs from the grip of security.

There, the manager tries to stop the guests. Sherlin’s ex leaves, she goes back to get his phone and hits Preeta in the way. Sherlin turns around hitting Preeta and leaves while Preeta was shocked to see her. She was worried where to do, there is Sherlin on one side and security guards on the other. Sherlin leaves without noticing.

A security guard comes to take Preeta to the manager. Karan comes to go to the security guard and says he was also with her. They tickle the guard and flee from the hotel.they hurry into their car and leave the hotel vicinity. Karan stops at some distance. Both laugh together at tickling the security guard. They come out of the car laughing together. Preeta says this was the biggest risk in her life, Karan laughs it was the best in his life.

They share a high five which was missed. Sarla opens the door to ring at bell. Deepak stood there and greets them. Sarla recognizes him as a known of Preeta and Shrishti. Deepak introduces himself as Preeta’s husband to be, and enters the house. Karan felt cold being wet. He was laughing badly as much as his cheek bone ached. Preeta was concerned and dries his face and hair with her Dupatta.

Karan was moved and holds her hand cleaning her face. Deepak explains to Sarla that there was a little misunderstanding between them, but Raghubir liked him for Preeta. He loves her dearly, and can’t live without her. Sarla remembers what Shrishti said about Deepak. Deepak explains Shrishti is childish and dislikes him because he would take Preeta away. Deepak asks if Sarla has an objection.

He assures he will be the best husband for Preeta, a son for Sarla and a brother for Shrishti. Deepak asks Sarla and Dadi ji when he must bring his parents for engagement. Dadi ji asks if there wasn’t an engagement. Deepak wonders what he must make up, he says Raghubir died and the engagement couldn’t take place. Sarla was weepy and takes a leave.

Karan stares Preeta as she dry her hair. Karan says he doesn’t want to watch the video alone. They watch the video, Preeta was restless why they didn’t yet come out together. They spot Sherlin come out of the room with a hooded man. Preeta was upset that all their efforts went useless. Karan tells her not to be sad, at least they could see Sherlin was with a man. He says at least she became a junior spy. Karan was cold and sneezes, Preeta insists on him to go home. Sarla was crying in the room that he has left them alone.

Dadi ji says that man had left their lives a long time ago. Sarla cries she still had hope that he might return. Dadi says he had left her and two minors; he had died for her that very day. If he was meant to be for them he must not have done all this. Sarla says she wear her necklace only because a married woman’s neck must not be left empty; she always thought that maybe he return realizing his mistake. Dadi swears Sarla not to take the necklace off, a woman must never cry behind a man who doesn’t value her.

Sarla cries that she never inquired her daughters about where their father is, how he feels. Dadi says its right the girls didn’t tell her, may be they were afraid to see tears in her eyes. Dadi says she should also not show it to the girls that she know about it. Karan and Preeta reach home. Karan comes to open the car door for her as these are manners. He shuts the door and her clothes were stuck. Karan comes to help her but the she forbids. Karan deliberately locks the car door and wait until Preeta calls him for help. Deepak hears Karan ask Preeta to say Baby, please help me.

Preeta says, Baby, please help me. Karan comes to help her and holds her close to himself. He finally opens the door, Preeta asks if it was this simple? Karan says sorry. Preeta says they must get Sherlin tomorrow for sure. She tells him to leave now. Karan turns to call her Kareli! Karan laughs as she responds to her new name, then angrily says good night. Deepak was curt that Preeta must be on a date with Karan, she hurt him and is a betrayer’ now she will have to pay for all these acts. Preeta notices the door was open. She comes inside and pours herself a glass of water but the glass drops as she turns to face Deepak.