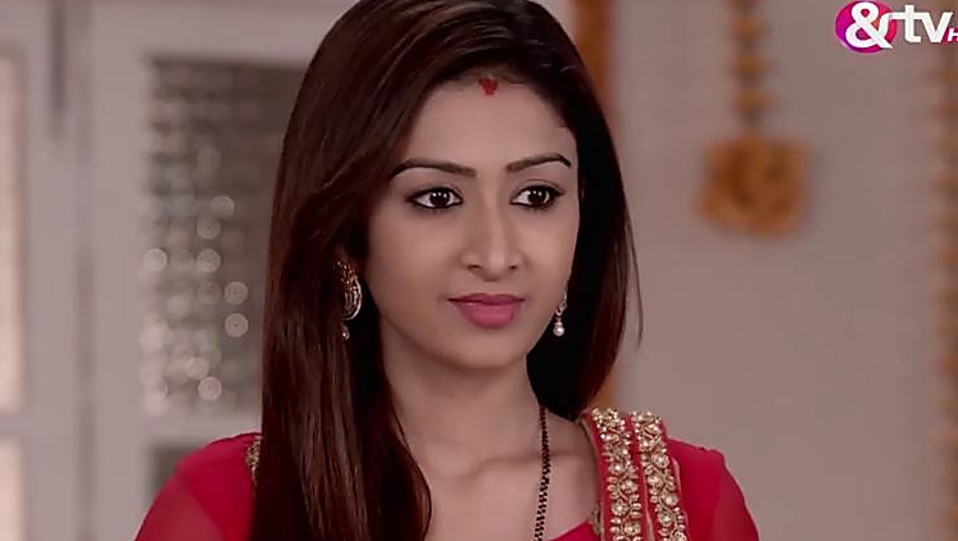 Harjeet and Mohini go to meet Nihaal. Nihaal is brought there. Amba and Jagan show this to Pahujas. Harjeet does Nihaal’s bail. Mohini thanks Pahuja for helping her. Amba asks did you know this. FB shows Mohini telling Pahujas about Nihaal, he is in jail, it was not his mistake, he is framed in wrong case because of Pavaniyas. Mohini emotionally blackmails them. Pahujas help her in freeing Nihaal. FB ends.

Pahuja says it was our duty to help you. Raj and Mannu come there. Harjeet taunts Amba. Mohini says you framed us and then got you here, they are so fallen. Harjeet says come, we will prepare for engagement. Harjeet asks Raj and Mannu to come along and see arrangements.

Mohini says whatever you do Amba, you can’t make me lose. She insults them. She taunts that Pavaniyas don’t have marriage in fate. She reminds how she insulted Simran, whom will you send this time Amba. Mannu recalls Simran. Raj goes. Nihaal collides with him. Raj sees him.

Raj comes to meet Mannu at the shade. Mannu says you have right to get angry on me, but if you keep yourself in my place, you can understand, I don’t have more time to apologize, I have to settle scores with Mohini, I have to break this marriage any way, I can’t think of forgiveness now, I don’t expect you to support me.

Mohini leaves from jewelry shop. Amba comes there. Mohini and Amba argue. Mohini says you can’t do engagement, Pammi will get engaged in some time, I wish you could come and see Bajwas’ Jashan. Amba asks what Jashan, there won’t be any Jashan, I kept big yagya, so that Naagdevta ruins your happiness and this engagement breaks. Mohini says do anything, I will get this engagement done today. Amba says I will see and leaves.

Harjeet calls Rohan and asks him to get shoes. Nihaal gets the shoes and gives him, saying Rohan is drunk. Rohan come there drunk. They hold him. Rohan falls on bed. Nihaal says I will manage him, Mohini went to get jewelry for Pammi. He keeps the shoes for Harjeet. Harjeet wears the shoes. Nihaal cleans his shoes. He thinks I will win your heart serving you this way, I will become your heir, you won’t know you are fooled, like my mummy did 10 years before. Mohini thinks of Amba’s words and gets angry.

She says Mrs. Pahuja is been troubled by pandit, what shall I do. Mannu gets pandit and asks her to meet, pandit came early for puja, why are you worried. Mohini shuts door and talks to pandit about yagya. Pandit scares her about the yagya. Mannu winks to pandit. Pandit says I have solution of all problems, I can’t stop yagya, but I can fail its effect, if any woman does dance and impresses Naagdevta, then the bad effect will not fall on you.

Mannu says this is different solution. Pandit tells about Vishwamitra and Mohini. Mannu asks who will dance. Mohini says I will dance, I have to get Pammi engaged, I will take risk. Guests start coming home. Nihaal tells Harjeet that Pahujas have come. Harjeet welcomes them. Pammi comes and sits with Aman. Mrs. Pahuja asks about Mohini. Harjeet says she will come.

Mannu gives the dress to Mohini and song CD. She asks him to dance and please Naagdevta. Mohini asks why, is these clothes bad. Mannu asks her to do dance well and not take risk. Mohini thinks to do this to get Pammi married. Pandit asks groom and bride to keep engagement rings. Nihaal gives the ring box to Harjeet. Harjeet keeps the ring. Mrs. Pahuja asks will rasam happen without Mohini. Pammi says I will get her. Pandit says no, sit down, you are bride. Mrs. Pahuja says I will go and see her. Harjeet says don’t know where did Mohini go. Mohini plays snake charmer music, and dances in the room. Mannu goes. Mrs. Pahuja come upstairs.

Mannu recalls Harjeet asking Simran to dance, and Mohini insulting Simran. Mannu says you made my sister stand with dancers, see what happened with you. Mrs. Pahuja asks where is Mohini. Mannu says she is in her room. Mrs. Pahuja and everyone hear the music. Harjeet says I will go and see. Everyone go to see. They get shocked seeing Mohini dancing. Mannu smiles and thinks this is punishment to insult my sister. Mrs. Pahuja asks is she mad. Harjeet gets angry and asks Pahuja to let him talk to family in private. Pahujas leave. Harjeet slaps Mohini and scolds her. He goes.

Nihaal asks Mohini what happened. Mohini says this happened because of Pavaniyas. Mannu recalls telling plan to Amba. Mohini says Pammi should get engaged today, Mrs. Pahuja is mad and is calling me mad. Mannu records their talk. Nihaal asks why did you not tell us. Mohini says I told Sartaj/Mannu to stand outside. Nihaal catches Mannu red handed and scolds Mannu. Mannu tries taking the phone. Nihaal drops Mannu. Mannu’s beard comes out. They get shocked seeing Mannu.

Mohini asks how dare you get here. Mannu says you insulted my mum, I showed you your real place today. Nihaal gets angry. He says Mannu has come here, but can’t leave from here. Raj stops Nihaal. Raj says don’t do mistake of raising hand. Mannu and Raj smile

Mohini ask Raj are you with Pavaniyas, what will you do now, your phone broke. Raj shows her the recording. Raj says count till 5 now. Raj counts down. They hear Pahuja shouting enough. Mannu laughs. Raj asks him to leave fast. Pahuja scolds Harjeet. He asks him to get Mohini treated mentally.

Nihaal gets angry. Mohini stops him. Pahujas leave. Pammi cries. Nihaal consoles Pammi. Raj and Mannu laugh thinking of Mohini’s dance. Mannu says I knew you will support me, its childhood friendship. The men hit Mannu. The men surround them. Rajveer gets shocked.

Harjeet says Mannu and Rajveer did this, you think they came here hearing your name, they came by my name, you have no status, our family has respect, Mannu is more smart, will Nihaal become Bajwas’ heir, he has no blood of Bajwas.

Nihaal says my men went to kill them. The men get beaten up and come. Harjeet asks them to see their faces. The man says we injured Mannu, but Rajveer angrily beaten us. Harjeet asks do you want to make Nihaal the Shah, if Raj was here, none would have defamed us. He recalls Amrit and says find out where is Amrit, maybe my son is with him. Harjeet insults Mohini and her children. He goes. Mohini says this can’t happen because of Mannu and Rajveer, I can’t lose this, if Harjeet finds Raj, we will come on road. Nihaal asks him not to worry, nothing such will happen. He thinks to become Shah.

Rajveer asks Mannu to come to hospital. Mannu says no, I can’t tell anyone I got injured, I m a girl. Raj cries. He says you are injured and need a doctor, you are saying about hiding your identity, come with me. Mannu says no, if this matter goes out, everything will end. Raj says fine, I will take you somewhere else, come with me. He takes Mannu to the shade.

He makes Mannu lie down and thinks how to do the aid. Jagan comes home and tells Amba that Mannu has broke Bajwas’ marriage. He says Mannu and Rajveer fooled Bajwas and broke the marriage, I knew Mannu was the sardar, he went to Bajwas house, my men saw them leaving from Bajwas. She asks him to find Mannu.

He says I agree he is clever, he made me happy, I will find him. Amba thinks Mannu is taking her identity light, if anyone knew about Mannu that she is a girl then. Raj buys medicals. He sees Jagan. Jagan asks about Mannu. Raj says he went for some work, he will come in some time.

Jagan says great, you both won my heart, you broke the marriage. He hugs Raj. Raj says it was Mannu’s idea, I just helped him. Nihaal looks on and thinks why is Jagan happy, my men said Mannu is injured. Jagan asks what happened, this medical. Raj says a goat’s child is injured, I was thinking to do aid. Jagan asks why did you go this side then. Raj says I thought I forgot my phone. Jagan says tell Mannu to come home. Raj agrees. Jagan goes. Nihaal follows Raj to get some clue.

Amba meets Pahujas. Pahuja says I know it was wrong to get related to Bajwas, we have already gone through a lot because of your enmity. Amba says we value your relation, we found Gunjan’s relation in big family, she came to us and said she likes your son, so we have come here. Aman says I also like Gunjan a lot, I decided I will marry Gunjan. Pahuja asks are you sure. Aman says yes. Mrs. Pahuja says its right mahurat, it means its good, we will agree. Pahuja says fine, keep marriage soon. Aman greets Amba. Amba recalls Mannu’s words and gets glad.

The servant comes running to talk to Harjeet. Mohini asks what’s this. He says I got Amrit’s address. She says Harjeet should not know this, take this money and go from pind for some days. He goes. Mohini thinks to go to Amrit. Nihaal thinks where is Raj. Raj goes to shade and asks Mannu what happened to her. He asks Mannu/Preet to come to senses. He does her aid. He hugs her and cries.

Next: Tuesday update the heir