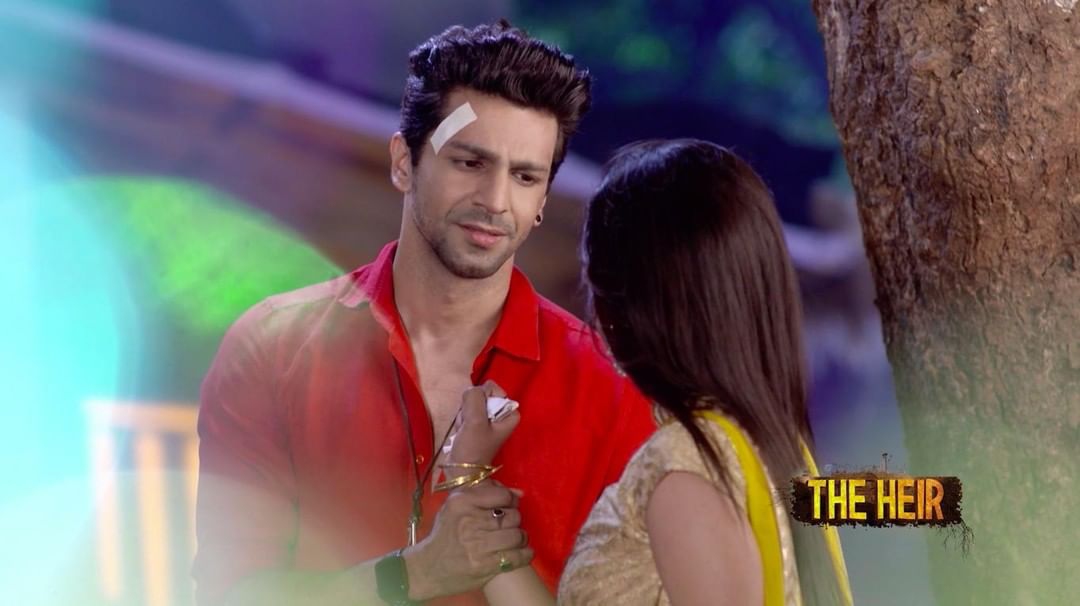 The Episode starts with Raj asking Mannu who is his friend, Mannu or Preet. Mannu says I have no answer of your question, since I got senses, I just got to know this that I m a guy.

She recalls Amba’s lie. She says one day, Amba accepted I m a girl. She tells everything. Raj says it means you did not know. Mannu says yes, Amba had to lie else Bebe would have killed me, she lied to everyone to save my life, she lied to me also, everyone thinks I m a guy. She says I m Mannu forever. Raj says no, you are a girl Preet, how long will you lie, past is gone, today things are fine, come we will tell truth. She asks what are you doing.

Raj asks what are you doing, you have full rights to live freely like a girl. She says no, I have to live like a guy forever, else everything will be ruined, Amba’s lie will come out. He asks how did you become a coward, Mannu is brave and you are sensitive like a boy.

She says when you did friendship with me, I was a guy, I m still the same, nothing changed, why are you raising the question today. Raj says everything changed, you are that girl whom I …. I can’t be a liar’s friend. Mannu says even you are lying, you are Raj Bajwa and staying as Rajveer. Raj says you know the reason. Mannu goes and ties pagdi. Raj helps her.

Jagan shouts Harjeet. Harjeet aims gun at him. Amba walks in. Nihaal argues. Jagan scolds them and says if anything happens to Mannu, I won’t leave you all. Harjeet scolds them and says this is my house. Amba asks about Mannu. Mannu comes there with Raj. Amba and Jagan smile seeing Mannu answering Harjeet well. Mohini says I will drag you and see you for breaking my daughter’s relation. Mannu taunts Mohini and leaves. Harjeet scolds Mohini and Nihaal. He says now I have to find my son.

Mannu comes home. Amba asks Raavi to get aarti plate, my son has entered enemy’s house and failed them today. Raj looks on. Mannu gets glad. Amba does his tilak and aarti. Mannu says I m proud of my womb, I gave birth to a tiger son. She thanks Raj for his favor to support Mannu. Mannu asks Amba to serve food. Amba says yes, I made your fav food. Mannu says great.

Amba says stop, I want something from you, promise me you will never go to Bajwas house. She asks him not to have any connection with any Bajwas. Mannu sees Raj. Mannu swears on Amba. Amba smiles.

Amba says Gunjan’s engagement got fixed with Aman. She asks Raj to do arrangements. Raj gets thinking. Mannu comes to him and knocks door. She says I was finding you everywhere, you are here. Raj asks were you finding me. Mannu talks to him. He says Harjeet did wrong today. Mannu says its good, everything happened well, Amba and Gunjan are happy. She holds him. He looks at her. She asks are you angry, I thought everything got fine between us.

Raj asks how can it be fine Preet, I see you like Manni and I see Preet. Mannu says Raj, accept that there is just Mannu, no Preet. She leaves.

Its morning, someone comes to Amrit. She opens the door and gets shocked seeing Mohini. Mohini says I had to come, you were annoyed. Amrit hides Raj’s photo. Mohini asks did you get your son Raj. Amrit says yes, he is here. Mohini says you got old, Raj is handicapped, till when will you manage this, husband’s house is heaven. Amrit says I will not step in that house. Mohini gets glad and thinks I won’t let you come.

She calls out Raj. Amrit says he is not at home. Mohini says I forgot my purse, and goes to pick it. Amrit gets tensed. Mohini sees her and thinks why is she worried, I should not go so soon. She says I will meet Raj and go, I will wait till evening. She sits back. Raj does arrangements and sees Mannu. Raj thinks Mannu is a guy, he is my friend, why don’t I believe this, Mannu is not Preet. Mannu asks Sukhi to go and get ready. Raj says I thought to get Gunjan and Aman by these doors. Mannu cleans the sweets off his face. Raj looks at her. Jeena jeena….plays………. He sees Preet and smiles. He thinks Preet is your truth, I will make you realize this, its my promise.

Raj welcomes Pahujas. Aman introduces Raj and Mannu to his friends. Aman and his friend hug Mannu. Raj looks on. Mannu sits with them. Raj gets angry. Raj attends Amrit’s call. Amrit says Mohini has come here, she is saying she will meet you and go. He asks how did she come there, don’t worry, everything will be fine, Raj will come there in some time. Amrit thinks how will Raj come here. Mohini goes to check the door.

A guy acts as Raj. Mohini gets glad and thinks Harjeet will never make him Bajwas Shah. She smiles. Amrit gets shocked seeing the guy. FB shows Raj calling his friend and sending him home. The guy says she is Mohini aunty right. Mohini says you have grown up. She asks Amrit why is she worried. Amrit says I feel ill.

Mohini asks him to take care of Amrit. She asks don’t you miss anyone there. The guy says I miss, but not much. Mohini says its good I met Raj, I will leave now. She says I forgot my purse again. She sees the skating shoes and thinks who’s that skating shoes.

Raj sees Aman’s friends with Mannu. He goes. Raj says I will give skating shoes to Bittu and goes. Mohini leaves. Aman sends note for Gunjan, asking her to meet. She smiles. Gunjan goes to him. Raj takes Mannu with him. Gunjan and Aman look for each other. Raj asks Mannu what are you doing. Raj says I don’t like to say indirectly, I m not liking all this. Mannu asks what. He says you are laughing with those guys. She says they are Aman’s friends, I am Aman’s brother in law. Raj says sister in law, you are a girl Preet.

don’t know this. Raj asks will you go and drink with them as a guy, will you do all this. Mannu says I won’t have drink, its about Gunjan’s happiness, don’t do anything. Mannu and Raj leave and see Aman and Gunjan outside. Gunjan thinks why was Mannu meeting Raj alone in storeroom.

Pammi calls Mohini and cries, saying Aman is marrying Gunjan. Mohini asks her to forget Aman. Harjeet calls her. Mohini scolds thinking its Pammi. He asks where are you. She lies to him and says I will come back soon. She says I feel something is wrong. She recalls Raj and Amrit. She says Amrit is hiding something from me.

Mrs. Pahuja takes Mannu’s pic. Mannu asks why my pic. Mrs. Pahuja says my sister is finding a guy for her daughter, she is also lean like Mannu, they will be good. Amba looks on. Raj and Mannu see each other. Amba asks them to come for dinner. Aman takes Mannu and his friends photo. Raj looks on. Aman’s friends take Mannu with them.

They all drink and ask Mannu to have it. Mannu refuses. They insist. Raj comes and stops them. He asks them to have Chakna. They ask Raj to drink. Raj drinks wine and sees Mannu. He gives the wine to Mannu. She thinks how can Raj do this, knowing I don’t drink. Raj asks Mannu to have a sip. They insist and says its about manhood now. Mannu drinks and coughs. Raj says I did all arrangements, come we should dance. Aman’s friends go.

Mannu gets leaving. Raj stops her. She asks are you happy now. He says I did not expect this will happen. She says I thought everything got fine between us, you have forgiven me. Raj says yes but a truth came out, you are Preet, not Mannu. Mannu says I m Mannu, a guy. He says you don’t care to laugh with those guys. She says yes. He asks what did you say, you don’t care if they touch you anywhere. She says you are drunk. He says you could not drink, you are a guy, you should have not cared. He holds Mannu. Mannu gets tensed.

He says you caged my Preet inside you, Preet wants to come out, else you would have not shaken up by my touch, I will prove I m not mad, you are mad in my love, this is my promise, you will also love me madly one day.

Next: Wednesday update the heir