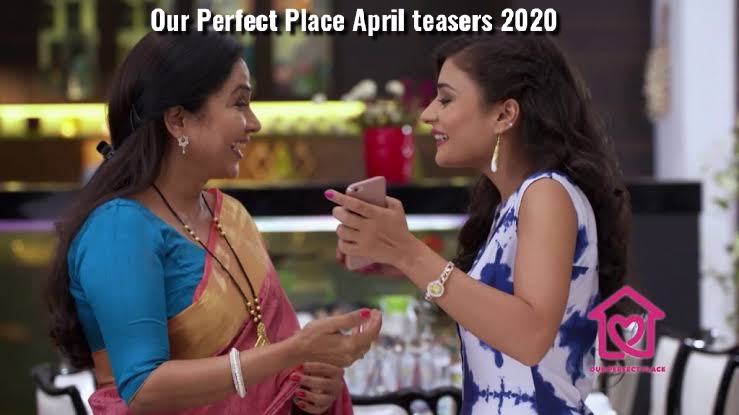 Our perfect place April teasers 2020: Sameer prepares to leave for Paris but has a pregnant girlfriend to consider, Uday quits college, Niranjan is starting afresh and Rahul plans to leave soon

Niranjan asks Govardhan for 10 million loan, what could he be hiding? Rita is having her own problems too with Niranjan, but something happens to him which may change things.

Niranjan’s life is at risk and Parimal is the one who offers to make the exchange. Will Niranjan come back unharmed? Will Rita be able to forgive him? Uday returns home from college with breaking news for his family. Uday informs them of his decision to quit college and face music. He further reveals that he joined the band to be able to get away from parimal.

Things at the house seem to be getting better when Rahul plays a cricket game that ends up involving the family. Sameer reveals all his pent up emotions and accusations towards his family for abadonning him while he was a twelve. He is still not keen on staying at home, and the reason why comes out when a stranger knocks on the front door.

Once the doctor has checked in on Pooja, it is discovered that she is pregnant. Samir has a lot to answer for now as a wedding must be planned. Rita identifies Pooja father as a big criminal. Sameer cancels his trip and return home to enquire more about the pregnancy. He is willing to take responsibility of his child but puja doesn’t want a marriage of pity.

Convincly, Sameer and Puja marriage date are fixed through the intervention of Ila and govardhan. Samir realises that he must take responsibility and take his marriage with Pooja seriously.

Inder acts as if he is the one in desperate need of help but it seems as if he is there to trick money out of Ila. Rahul is fighting his liver disease and an incident happens which makes things worse.

It seems that the men Rahul beat up were connected with the police and they get Rahul arrested.

Niranjan has been acting suspiciously with someone that he has been talking with on the phone and Rita suspects that this is Maya. Thieves break in at Parimals house and Inder ends up saving the day, but at a cost.

Niranjan has been acting suspiciously with someone that he has been talking with on the phone and Rita suspects that this is Maya. Thieves break in at Parimals house and Inder ends up saving the day, but at a cost.

Things at home are looking good with the family celebrating together, however a terrible accident happens to one of the family members. During all this, Rita gets the response to her enquiry about Maya.

Ramakant approaches Samir with news that will go against every single one of his wishes. Samir now realises that it may be time to let out all that has been weighing his heart down.

Samir bares his heart to Pooja about  all he has been feeling, Pooja feels she has no choice but to leave.

Samir lies devastated at home after the news that he has lost his child. Niranjan makes matters worse when he come into his room and lets Samir know what his thoughts are. This causes a reaction in Samir that none could expect

Rita is at a loss as to what to do about Maya. Ila can see this and helps Rita out. Will the truth behind who “Jignesh” is finally be revealed? Will Ila be the one who exposes Niranjan for the scams that he has been putting Rita through?

Ila has exposed Niranjan, but will she expose him to Rita? Or will Niranjan work his way back into the family without the truth coming out? Gayatri comes to learn of the truth and sees a side of Ila she never thought possible

Gayatri cannot accept the way that things have been handled with Rita so she decides to get involved with the situation, will her getting involved mean she approaches Rita with the truth or will she go further and go to Maya?

After meddling in Niranjans affairs, Gayatri may have put herself at risk when the family slowly starts piecing things together. Niranjan comes to learn of the truth first, who will defends Gayatri from the storm coming her way?

After making peace, the brothers look to be getting along again. Rita seems more settled but Niranjan starts to act up again which causes her to doubt where Maya is in his life. Uday is back home again but for his own reasons

Parimal comes to learn of what Uday’s plans for his future are but he strongly disagrees, going so far as to shame Uday in front of the entire family. Niranjan can’t keep away from Maya and this starts to cause more tension with Rita

Uday has what he needs, and wants to return to the college, however Parimal wants to escort him there. How will Uday keep the secret of what’s really going on from his father? And what will Pintu do to Uday upon his return?

Uday has become desperate after Pintu makes him realise that his plan to raid his fathers’ trust fund will be pointless. Together with Mandy, he comes up with a plan to get money out of his family, using emotional blackmail…

Parimal comes to learn of Udays lack of attendance at his college. Rahul and Samir are busy trying to get the jewellery together to pay Udays ransom. Meanwhile, Niranjan has his hands full when he catches Maya’s husband trying to beat her

The news of Udays record with his college affects Parimal deeply, moving him to go into Mumbai to track down his whereabouts. Uday has his own trouble to sort out as well, as the time has come to settle matters with Pintu

Pintu doesn’t want to hear anything from Uday and decides to humiliate him by dressing him up as a belly dancer. Rahul and Samir get closer and closer to tracking down Uday, but will they be able to rescue him in time?

Niranjan knows that he needs to finally settle matters with Maya to have peace in his marriage. He goes to Maya’s apartment to do this, but what will be waiting for him once he gets there? At home, Uday tries to make peace with his family

Uday knows that the ultimate person to make peace with his father, but how will Parimal react to Udays pleas for forgiveness? Rahul recollects the time he spent with Tanu and this affects him deeply, causing Ila to go to an extreme

Niranjan won’t tell Rita what he did and its making their marriage suffer, so Rita hires a marriage therapist. However, the therapist looks exactly like Tanu, will Rahul recognize her as his beloved? What if it truly is her?

It seems that it’s time for Niranjans act of betrayal to be brought into the open. Will it be because his guilty conscience has finally got to him or will it be Maya who comes forward? Still, the full truth won’t just devastate Rita

After the truth has come out, Rita is beyond devastated. Ila refuses to let anyone help Niranjan, but will his brothers leave him outside to starve? Rita is not eating so Tanu is called to help, but Hetal interestingly gets in the way

Rita speaks to Ila about Niranjan, the unexpected comes out of the conversation. Rahul and Hetal have a disagreement about an item on the menu. Meanwhile, Tanu visits Hetal to repair their relationship, but what caused this hate?