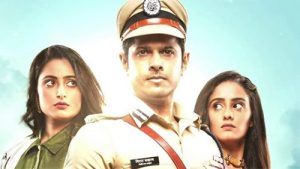 Sai Joshi, a young and outspoken girl from Gadchiroli aspires to become a doctor and dreams to study MBBS at the Nagpur Medical College. In Nagpur, Virat Chavan becomes an IPS officer and is posted to Gadchiroli.

Sai stays with her father Inspector Kamal Joshi in Gadchiroli and her world revolves around him. The local politician’s son and goon, Jagtap, falls in one-sided love with Sai and harras her. Jagtap try to kill Kamal to get married with Sai. On topping 12th exam in Maharashtra state, Sai request her father to take VRS and move to Nagpur.

Virat joins his posting in Gadchiroli. Virat’s car splash mud on Sai which makes Sai dislike him. Further, Virat ask Kamal to postpone his VRS on stage. Kamal accept his senior officer Virat order which makes Sai anger. Virat and Pakhi gets infatuated with each other but Chavan family select Pakhi as Samrat’s bride. Pakhi to stay with Virat gets married to Samrat and Virat promise Pakhi to not give her place to any girl. Pakhi confess love to Virat which Samrat overhears and leave for duty, heartbroken. 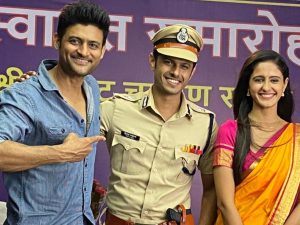 Kamal Joshi takes the bullet to save Virat from Jagtap shoot and Sai sees it. On his deathbed, Kamal asks Virat to take care Sai. Sai is devastated after her father death and try to commit suicide in her emotional state. After Kamal’s funeral, villagers pressurise Virat to marry orphaned Sai. Sai request Virat to decline marriage proposal and remind him about Pakhi. Virat propose deal marriage and unwillingly, Sai gets agree for it. During marriage, Virat keeps reminding Sai to not expect any husband love and support from him as he already made promise to Pakhi. Sai also makes it clear that She will leave marriage once she complete MBBS. Pakhi gets shattered seeing Virat-Sai marriage but Virat assure her by disclosing deal marriage details. Chavan family refuse to accept Virat-Sai marriage as Sai is not from upper class, Shahānnau Kule Maratha, like Pakhi. Chavan family humiliates Sai by name calling Junglee, defaming Kamal death and his upbringing but Sai gives a befitting reply to them.

Virat face false accusations by Vithal Mane and gets suspended from job. Virat blames Sai for it. Further, Virat blames Sai to snatch away his love Pakhi and claims to ruins his life. Sai goes to police department and saves Virat job.

Sai comes to know Devyani-Pulkit past relationship and decide to track down the truth. Sai find a chance when Pulkit invites on lunch. Virat stops Sai physically and orders to close house main door and not open till he lock Sai in a room. But Sai does not surrender and goes to meet Pulkit. Further, Virat stops Sai to have food and claims to enjoy on his money when Sai returns home. Sai decided to leave the house but Ashwini makes Virat realise his mistake and Virat apologize to Sai and stops her.

Sai expose the Chavans’s act of making Devyani mentally ill, Devyani-Pulkit separation and putting newly born Harinee in orphanage. Sai plans to reunite Devyani and Pulkit by getting them remarried. Pakhi writes fake letter to stop Sai and Virat agrees with Pakhi. Pulkit gets kidnapped by Chavan family’s goon. Later, Sai and Pulkit shows proof to prove Pulkit’s innocence but Virat refuses to believe. Virat throws Sai from the house at midnight and stops Ashwini to give food to Sai. Pakhi and Virat calls Sai as gold digger and mentally challenged person. Sai arrange for evidence and brought it in front of Virat. Then, Sai goes back to Gadchiroli. Virat does not take any action against his family’s crimes and forgive them. Virat apologies to Sai and ask her to return but she refuses. Virat goes on a mission and gets shot. A emotional Sai rushes to the hospital and takes good care of Virat. Both reconcile and Sai return home.

On Harinee’s birthday, Sai mend Devyani-Harinee’s relationship and conveys Chavan family to accept Harinee. Meanwhile, Pakhi confess her feelings again which Sai see it. Sai ask both of them to clear their stand in front of family. But, Virat claims Sai’s questions are cheap and does not requires any answer. Pakhi calls Sai a Nurse and ask her to take money and leave the house. Chavan family support Virat and Pakhi and humiliate Sai further. But, Sai gives befitting reply to them.

Sai gifts saree to Pakhi’s mother on anniversary after Virat permission. Pakhi and Chavan family humiliate Sai and ask Sai to apologize to Pakhi. Sai has emotional breakdown due to constant bullying and harassment and agrees with their claim of calling herself incompetent and difficult person to be fit in Chavan family.

Ninad childhood dream gets complete when Sai surprise him with Harmonium, which Sai brought it from her scholarship money. Ninaad felt speechless and gives blessing to Sai.

Pakhi traps Ajinkya to meet unwell Sai in bedroom and Chavan family sees Pakhi’s action but keeps mute. Virat gets angry and harm Ajinkya physically and question Sai’s character. Sai feels hurt and goes out of house but gets hit by car. Virat apologize to Sai by crying in front Kamal photo and she forgave him.

Virat plans a trip to Mahabaleshwar to celebrate marriage anniversary. But he lies about this to Sai and Chavan family that this trip is an official one. Pakhi misses Virat and touches his things to feel him in bedroom. Pakhi fake cry about Samrat and blame Sai to enjoy with Virat on her miserable time. Chavan family sympathies with Pakhi. Virat narrates a fake love story to Sai but Yoga instructor interrupts them and speak about Virat-Pakhi’s love story. Sai gets agitated as she thinks Virat was telling Pakhi and his love story with could not get complete due to her. They have argument over anniversary celebration and Sai leaves the place. Virat gets hurt by Sai’s behaviour and decided to take revenge.

Sai meets Samrat in hospital while helping an injured child, who belong to Samrat’s NGO. Sai convince Samrat to return home and Samrat gets agree. Samrat reveals that Pakhi never wanted to marry him and ask for divorce from Pakhi. Sai takes good care of unwell Virat but he continues to be rude with Sai. Next day, Pakhi helps Virat to wear his T-shirt in bedroom and ask him to meet in cafe alone. Pakhi confess love to Virat again and ask him to divorce Sai. Sai visits cafe with her friends and gets hurt to see Virat and Pakhi holding hands and spending time. Virat orders Sai not to speak about cafe at home but Shivani overhear Sai’s rambling while passing through her room and cafe truth comes out. Virat compares himself and Samrat with Lord Ram and Lakshman and claims Pakhi as very innocent and emotional person who met him at cafe to discuss about Samrat, although the truth was totally opposite. Samrat believe in Virat word’s and drops divorce proceedings.

Pakhi plans a Puja at home to make Virat jealous. Sai denies to become part of her drama and wants to attend her college but Virat forcefully locks Sai in the room. Sai decides to leave house due to overpowering and rude behaviour of Virat towards her. Devyani sees Sai packing her stuff and inform Virat. Pakhi says Devyani to stay out it but Devyani calls out her. Virat shout on Devyani and asks her to behave with Pakhi properly. Sai leaves the house but gets into an accident while saving a child from falling into pit on road. Sai’s friend takes her to the hospital. Devyani shares her superstition about Virat-Sai safety and Ashwini ask Sai to get back home for Virat safety. An emotional Sai agrees with Ashwini request and return home.

Ashwini separates Sai and Virat’s room to give them some space. Sai and Virat give their relationship a fresh start, this time as friends.Sai falls into Virat’s love and wants to confess. Meanwhile, Pakhi enjoy being in Virat’s arms and plans to spend night with him in bedroom. Sai try to confess her feeling on diwali but Virat leaves for mission.

Virat and Naxalite Shruti flew from jungle after shooting a bullet to his best friend Naxalite Sada(Sadanand). Virat introduce Shruti as his wife in hotel to protect her from police and Mohit sees it. Police inform Virat about missing of Sada death body but Virat ignores and continue to be off duty to hide his treason act of protecting Naxalite Shruti. Mohit reveal hotel truth in front of family. Sai is devastated to hear this and plead to clear the matter. Virat ignore Sai and strictly warns family to not say a word against his Shruti. Sai keeps requesting Virat to reveal the truth but Virat enjoy to be Shruti’s husband and continue to spends his whole time with Shruti only.

Sai joins Pulkit to assist in hospital. Sai feels betrayed seeing Virat and Shruti as husband-wife. Further, Virat signs Sahas birth certificate as father in front of Sai and Sai gets heartbroken. Chavan family witness Virat caring Shruti and see Sahas as son of Virat in his birth certificate. Virat and Shruti starts living together as husband and wife in a separate house.

Police departments suspend Virat to have 2 wives. Sai to save Virat job and reputation ask for divorce and submit backdated divorce papers with Police departments. Police gives clean chit to Virat due to Sai’s papers and ask him to join back duty. Shruti confess her love to Virat and hug him but Sada came back. Shruti feel upset seeing Sada alive and stand against him to protect Virat. Sada gets angry. Sada kidnap Sai and ask Shruti to return. Virat gets injured in landmine blast while rescuing Sai and Police arrest Naxalite Shruti and Sada for their criminal activities.

Sai feels guilty having Virat on death bed due to her kidnapping by Sada. Chavan family put blames on Sai for their bad behaviour with Virat and linking Shruti as Virat wife. Sai accepts all false accusations in her guilt. Sai worship Lord Shiva in temple for Virat’s health. Doctor informs to get injection to save Virat. Sai arrange injection after many hurdles and saves Virat life. Virat gets out of danger due to Sai effort and comes to consciousness. Virat blame Sai for his condition and ask Sai to leave hospital. An emotional Sai keeps apologising to Virat.

Virat request police departments to release Naxalite Shruti from all charges. Chavan family apologize to Shruti and continue to blame Sai to justify Virat’s traitor act. Virat display his displeasure to Shruti to have her in jail and blames Sai for their conditions. Shruti kiss Virat and confess her love again. Virat promise Shruti to fulfill Sahas’s fatherly duty. A guilty Sai tries to apologise to Virat in many ways but Virat continue his rude behavior.

Virat returns to Chavan Niwas and Chavan family gets happy to get ridden of Sai. Sai to apologize to Virat return to Chavan Niwas during Holi. Chavan family supports Pakhi when she suggest to throw Sai in Holi fire to get rid of her and Bhawani when she disallow Sai to enter in house and deny food to Sai. Sai bears all insult to mend her relationship with Virat. Still Virat continue his rude behavior with Sai.