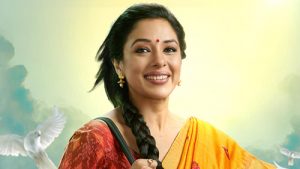 Anupama Starlife. A Devoted wife and mother’s get disheartened when she discovers her husband’s infidelity. Vexed, she seeks divorce and decides to live life on her own terms.

The story is about Gujarati homemaker Anupamaa, who is a devoted wife, mother and daughter-in-law. She has a family-oriented and self-sacrificing nature. Time and again, she is humiliated for being a mere housewife and for having an incomplete degree and education.

Meanwhile, Anupamaa’s husband, Vanraj Shah has been having an affair with his colleague, Kavya Gandhi for the past 8 years. Despite being warned by her best friend, Devika and Kavya’s husband, Aniruddh, she refuses to believe it and expresses her faith in Vanraj. On her 25th Wedding Anniversary, when Anupamaa sees Vanraj and Kavya getting intimate, she is left shattered and breaks ties with Vanraj and decides to live her life on her own terms. Anupamaa’s younger son, Samar also breaks all ties with Vanraj after learning the same. Rakhi informs the Shahs about the affair leaving them shattered. Soon, Anupamaa’s elder son, Paritosh marries Kinjal while Samar and Nandini fall for each other after Samar learns about Nandini’s infertility.

Anupamaa takes care of Vanraj’s health after he meets with an accident. Vanraj develops a soft corner for Anupamaa. He tries to express his feelings to her, but Anupamaa rebukes him for it. Anupamaa decides to start afresh and tells Vanraj that she wants a divorce. Vanraj fears losing Anupamaa and his family and leaves the house. Anupamaa finds him in a wellness resort in Surat and confronts him.

Anupamaa gets diagnosed with Ovarian cancer and asks Vanraj to sign the divorce papers. Later, Kavya and Aniruddh gets divorced with Kavya preparing for her wedding with Vanraj. Vanraj goes missing on the wedding day and is confronted by Anupamaa for lacking courage as well as commitment. Kavya and Vanraj get married. After getting successfully treated by an emergency surgery, Hasmukh asks Anupamaa to continue staying with them as she will always remain a part of their family, to which she agrees.

Kavya continuously taunts Anupamaa, trying to humiliate her and failing in her attempts to turn the family against her. Anupamaa Dance Academy gets established with the help of Samar and Nandini and the family rejoices. Anupamaa advises Vanraj to open a café in her academy but Kavya instigates him against Anupamaa and instead of being grateful for her help, he taunts her.

Anuj Kapadia, a successful business tycoon returns to India from USA. He turns out to be Anupamaa’s college batchmate and one-sided lover. Seeing Anuj and Anupamaa spend time together, Vanraj seethes with jealousy. Anuj’s team likes Anupamaa’s business idea and he offers her a partnership deal in his restaurant. Vanraj fumes and asks her to refuse the offer. Anupamaa signs the contract and joins Anuj as a business partner.

Meanwhile, Rohan, Nandini’s obsessive former boyfriend returns to win her back and attempts Samar and Anupamaa’s murders but gets caught red-handed by Anuj and leaves their lives fearing to be jailed for his father’s scams

Tired of all the taunts and accusations, Anupamaa decides to move out of the Shah house while Samar leaves with her. Later they start living in a rented house. Kavya makes Vanraj, Dolly and Anupamaa sign the property papers. In his frustration over Anupamaa’s repeated character assassination by some family members, Anuj confesses his unrequited love for Anupamaa to the Shahs, unaware that she overheard him. Initially shattered by one-sided love of Anuj, Anupamaa and latter get consoled and convinced by Samar and Gopichandra respectively to continue their relationship as friends.

Later Kavya reveals about tricking everyone signing property papers on her name, which makes Vanraj vengeful. He handovers divorce papers to her shocking everyone. However the latter refuses to divorce him. Meanwhile, Anuj gets injured while fighting with some goons and Anupamaa starts realising her feelings for him. She decides to stay at his residence until he recovers completely. However Vanraj shocks everyone by starting his business venture Vanika Teamworks with a girl named Malvika. However Malvika turning out to be Anuj’s sister and Anuj being an adopted child to Kapadias comes as a huge shocker for everyone.

Later it is revealed that Malvika suffers from depression and a victim of Domestic Violence by her former husband. While Anupamaa helps her to overcome the trauma, Kavya’s exit leads to a major argument between Samar and Nandini fuelled by Vanraj. While they clear their misunderstandings soon after Kavya’s return, Anupamaa gets shocked to know about Vanraj trapping Malvika in his love trap to become rich overnight and employees Kavya in her project to keep an eye on Vanraj.

Later Vanraj instigates Malvika against Anuj leading Anuj to transfer whole Kapadia Empire to the former. Anuj and Anupamaa vows to start a new chapter by relaunching Anupamaa Dance Academy. On Valentine’s Day while Anupamaa proposes Anuj, Nandini leaves Samar due to her insecurities regarding marriage and returns back to USA. This leaves him heartbroken and he decides to just focus on his dance career and vows never to believe in love again. Later Shahs decide to celebrate Anupamaa’s 45th birthday and everyone gets elated to know about Kinjal’s pregnancy.