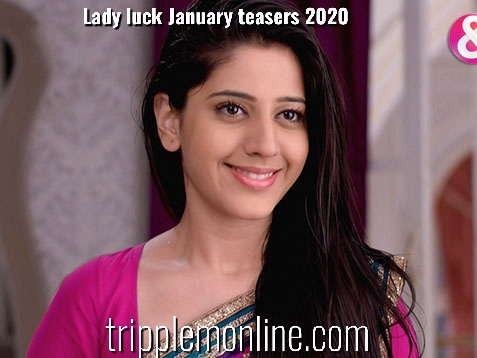 More secrets and scandals rock the Prajapati household. There’s a lookalike of Bhoomi and Vasundara secret is revealed January 2020 on Lady luck!

Pavitra tries to break the trust between Ansh and Bhoomi as she brings another person into their relationship. Bhoomi and Ansh stand together against Pavitra.

Vasundhara has been made to seem unfit and the rest of the family begin to worry about her mental state. Ansh is arrested for harassing a woman, will he be able to prove his innocence?

Ansh goes all out to celebrate Bhoomi’s birthday. Pavitra continues to disrupt Vasundhara’s peace of mind, placing a feeling of distrust among the family members.

Bhoomi accepts Pavitra’s challenge to prove how she has been the culprit the whole time. Bhoomi bares witness to the person who has been tormenting Vasundhara.

Ansh and Bhoomi have teamed up to make sure that Vasundhara gets well soon. Bhoomi fights Pavitra in an attempt to make sure she begins to value Vasundhara as her mother.

Vasundhara has decided to pass on the power of attorney to a family member while she gets well. Surbhi feels that she and Varun deserve better because of the idea’s planted by Pavitra and Kaveri.

Bhoomi’s life is in danger. Vasundhara hands over the household and business authority to Bhoomi and Lata, this leaves Suman and Surbhi feeling upset and unappreciated.

Kaveri strikes with a vengeance and this time it’s a matter of life or death. Vasundhara’s secret is revealed in front of the entire family. Ties and Bonds may never be fixed again.

Vasundhara goes in search of the truth to reveal her intentions to the rest of the family, but her life is in grave danger. Kaveri wants Vasundhara dead before she reveals the whole story to Pavitra.

Bhoomi fights for her life in hospital. Vasundhara’s name is cleared as Kanta reveals the whole truth to everyone. Pavitra is still adamant on killing Bhoomi and Vasundhara.

Pavitra is now the property owner of the Prajapati household and businesses, she is shaken when she sees the new guest that just arrived. The family is lost without Bhoomi.

Ansh and the rest of the family are not convinced that Bhoomi is alive, so they question the intruder who claims to be Bhoomi. Surbhi is no longer with Varun.

Pavitra is at her wit’s end as she ill-treats the rest of the family. The Shukla’s confirm that Bhoomi is alive although her face and voice are no longer the same.

Ansh tries to get intimate to see whether his wife has come back to him or not. A legal case has been filed for the property to be evenly distributed among the entire family.

Fake Bhoomi threatens to put Pavitra in her place without a second thought. Pavitra looks for different ways to get fake Bhoomi kicked out of the Prajapati household.

Varun fights to protect Pavitra’s integrity as his wife. Suman is a pawn in Pavitra’s little tricks. Pavitra has found pills that belong to fake Bhoomi, how will she use them against her?

The family finally accepts Divya as Bhoomi. Pavitra has gone to dig up Divya’s past in a ploy to get her out of the Prajapati household.

Pavitra tried her tricks to keep Vasundhara away from court. Pavitra dangles her marriage with Varun in front of Surbhi.

Skeletons come out of the closet as Divya’s past follows her closely. Yuvraj comes back with his murderous intentions and no one is safe.

Ansh’s life is in danger and he is not even aware of it. Pavitra has opened up a can of worms by letting Yuvraj into their lives.

Ansh and Bhoomi will be getting re-married, this doesn’t sit well with Yuvraj. Pavitra has to keep watch of Yuvraj as he loses his temper easily, in a dangerous way.

Vasundhara is happy as she celebrates Bhoomi and Ansh’s relationship once again. In her frail condition, Bhoomi gets to see her true love once again.

Yuvraj poses as a project finance partner in order to get into the Prajapati household. Divya begins to live in fear once again. Ansh is happy and has started working from the office again.

Bhoomi and Divya decide what should be done for the festival. Bhoomi tells Divya how she only wants happiness for her family. Yuvraj ruins the dress Vasundhara gave Divya to wear. Varun expresses his disgust in Surbhi and Pavitra’s actions.

Ansh ruins Pavitra and Yuvraj’s plan as he saves Divya from revealing her true identity. Divya and Ansh are about to celebrate their first festival together as a married couple.

Divya and Ansh get closer than ever before. Bhoomi manages to see Ansh in her weak state on the night of the festival. It is clear that Ansh misses Bhoomi dearly.

As the Prajapati family begin preparations to celebrate Diwali, Pavitra continues in her cunning ways.

Yuvraj threatens the safety of Bhoomi in order to get Divya back and to reveal her true identity to the Prajapati family.

Pavitra can no longer deal with Yuvraj’s obsessive behaviour when she finds out that Bhoomi is dead because of him. Surbhi wants her life back with Varun.

Divya tries to tell Ansh her true identity. Yuvraj tails Divya at every turn. Pavitra gets a questionable interest from a filmmaker, that is all too sketchy.

Divya has kept another one of Bhoomi’s secrets. Yuvraj wants to ruin the Prajapati’s just because of Divya. Ungard has something in mind for Pavitra and it’s just being a famous film star.

👉 👉 Next month teasers on lady luck