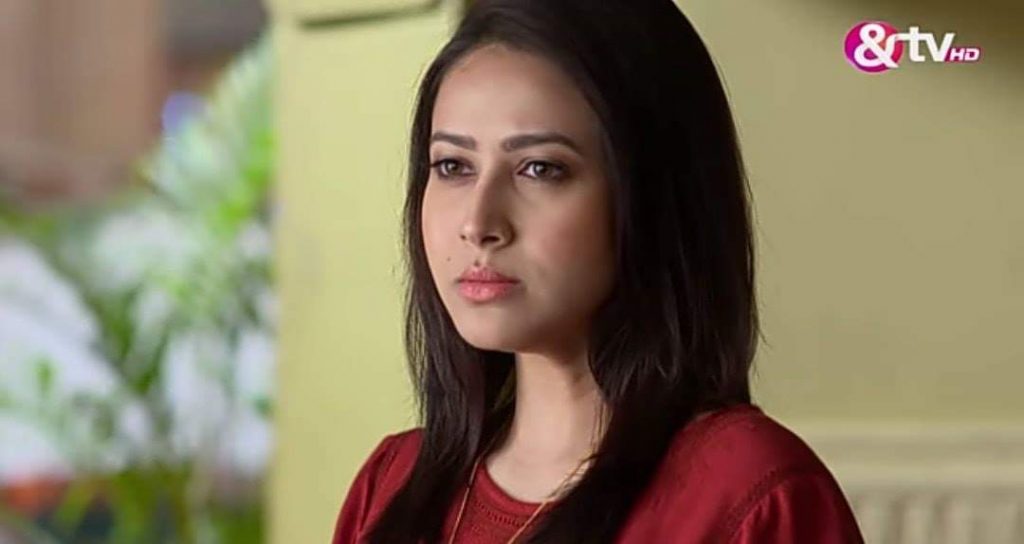 Janvi feigns a stomach ache due to ulcer. Sagar and Madhvi get concerned. Janvi tells Sagar to go without her. Ganga will bring medicine for me. Ganga nods. Sagar reasons that she might need something else as well. I will stay at home. She thinks she has to send Sagar to temple so she can put her plan into practise. She tells Sagar not to alter his plan because of her. I will feel bad. Madhvi assures Sagar she will look after Janvi. Ganga and Maharaj ji are also here. Sagar agrees finally.

I will write the name of the medicine after concerning doc. Please bring it. Pulkit, Supriya and Sagar leave for the temple. Madhvi and Ganga take Janvi to her room. Janvi mentally apologizes to Sagar for lying to him. I will say 1000 such lies if I have to get Ganga out from our lives!

Supriya and Pulkit look at each other. Sagar looks at them and shakes his head sweetly. He asks pundit ji to make the newlywed also do the puja together. Pulki and Supriya keep their hands over one another for the puja. Sagar calls Janvi. In her room, Janvi watches tv serials on her laptop. She receives Sagar’s call and acts all sweet. I am so lucky that you take care of me so much. I love you. he asks about her health. She tells him to be with Bhaiya Bhabhi. Ganga will soon come with medicines. I will take it. He ends the call. She remarks that the real drama will start when Ganga brings the medicines.

Janvi continues to watch comedy shows on laptop but switches it off when Ganga knocks at the door. Ganga asks her why she took so much time in opening the door. Janvi says you still doubt me. Give me the medicine. I am in very much pain. Ganga gives her water. I brought medicine so I will make you take it as well. I don’t hurt even my enemies. Janvi tells her to keep it. I will eat later. Ganga tells her to eat it now only. You were in so much pain just now. I will have to tell Bahu ji as well that I gave you the medicine. Janvi takes it. Ganga leaves.

Janvi closes the door right away and takes out the medicine. She takes the medicine that Yash gave to her. Ganga will be held responsible for whatever happens to me next! Poor Ganga, she does not know what is about to happen with her or what game I am playing!

Sagar tells Pulkit and Supriya that he had a word with Janvi. We should stay back here for a little longer? Pulkit tries to deny but Supriya suggests saying if Sagar is insisting. Sagar mumbles that Bhaiya listened when Bhabhi said it. Pulkit asks him if he said something. Sagar shakes his head. The couple sits down at one place. Sagar talks about the old days. I love this place. I used to bring Bhaiya here as well. They both are all quiet. Sagar thinks to do something. He goes to bring ice cream for them. Sagar looks back at them. They are sitting quietly. Sagar takes 2 ice creams. He begins to eat one while gives one to Supriya. Please share it. Pulkit asks him why he dint bring one for him. Sagar says I only wanted you to eat the ice cream of Bhabhi’s choice.

The vendor only had one. I also took other flavour. Share it with Bhabhi. Sharing increases love between people. Supriya holds out the ice cream for Pulkit. He takes one bite and gives it to her. She eats a bite. It leaves a mark on her face. Pulkit silently signals her. He mistakenly drops it on his shirt. Supriya cleans it. They share an eye lock. Sagar looks at them. I am will bring you (Bhaiya) close to Bhabhi!
Janvi opens the door of her room. You are finished now Ganga. Your game will be over. She comes to the kitchen and picks up salt. You will be blamed so badly because of this salt that you cannot even imagine. She mixes a few spoonful of salt in a glass of water and drinks it. Ganga comes there just then. She asks her why she needed salt. Janvi lies she was looking for sugar. I have a habit of eating something sweet after taking medicine.

Ganga gives sugar to her. Madhvi comes there looking for Maharaj ji. She is surprised to see both the girls together. Janvi tells the same to her. Ganga tells Madhvi that she gave medicine to her. Madhvi takes Janvi to her room to rest. Call out for Ganga if you need anything. Sagar goes to bring water. Pulkit receives a call from his client. He goes aside to attend it. Two men (in disguise of women) approach Supriya. They try to steal her bag when Supriya shouts for Pulkit. She fights with them to snatch her bag. Pulkit comes there just then and beats one of them. She holds onto him in fear. The second guy comes back to attack on Pulkit when he yet again beats him. They both run away. Supriya’s mangalsutra has been snatched off. She notices it in the hand of one of the guys. Pulkit hits a stone at his hand. The guy drops it and runs to save himself.

Pulkit picks up the mangalsutra. Pundit ji compliments Pulkit for saving his wife’s mangalsutra. Now make her wear it in God’s presence and start your relation afresh. Pulkit puts the mangalsutra around Supriya’s neck. They both look at the idol. Sagar comes running just then. They tell him about the incident. Thank God that you are atleast fine! The goons were actually Sagar’s friends. He thanks them for their help. They don’t mind doing this much for Pulkit. Pulkit holds Supriya when she was about to stumble. They share an eye lock. He suggests her to walk carefully. Her saree gets stuck in a plant yet again. He frees it for her. Sagar watches them from a distance. He thanks his friends for such a big gift. They take their stuff with them as they leave.

Madhvi brings Janvi to her room. Janvi thanks her for looking after her so nicely. Madhvi teases Janvi. I am taking care of you right now as you are ill. Once you become my DIL you will have to look after me. Rest for now. Call out for Ganga in case you need something. Janvi asks her if she can call her instead. Ganga may not like it. She gave me the medicine as if she did a huge favour on me. Madhvi agrees. Call me if you need something. She turns to go when Janvi vomits. She rushes back towards Janvi. Janvi says I feel restless. Madhvi takes her outside in the hall. I will just call Sagar. Sagar asks his brother to sit on back seat with Bhabhi. There is all the puja stuff in the front seat. Pulkit agrees. Sagar receives Madhvi’s call just then.

Ganga thinks of all that happened today at home. Maharaj ji is coming back from Janvi’s room muttering to himself. He tells Ganga that everyone has their own tantrums. Janvi does not like sugar in her milk. Ganga recalls seeing Janvi in the kitchen in the afternoon. Janvi was holding the salt container and asked for sugar from Ganga. Ganga asks Maharaj ji what happens when one takes water mixed with salt. He says people will vomit. Don’t even think to do so by mistake. Janvi is sitting in her room. The lights are switched off. Ganga sits on the sofa. Janvi shouts and immediately switches on the lights. She is shocked to see Ganga. Ganga calls her weak hearted. You always do something or the other. You take the wrong medicine or drink water mixed with salt.

She shows the right medicine to Janvi. I brought this one for you. You hid it very nicely in the shelf. I cannot understand how low you will stoop down for this enmity. You risked your own life. I really did get worried for you. I rushed to chemist to bring medicine for you and even called doc. You played such a dirty trick against me. I doubt if you actually did law. I think you studied only how to do cheap tricks against others. Janvi agrees lying to everyone. I did all this drama so this family throws you out of this house. Ganga says I thought you were smart but you are mad. Tilld ate, you could not realise how deeply rooted I am in this house. You saw with your own eyes today how much Babu trusts me. this relation is no easy to break. Give up.

My roots are very strong here in this house. Stop your cheap tactics. Nothing will come out of it. Sleep now, you must be tired after all the vomiting. She leaves from there. Janvi angrily throws some stuff. Janvi walks in the corridor. How can I sleep peacefully till Ganga is in the house!

She overhears Madhvi and Niru’s convo. Niru is leaving for Delhi for a few days. Madhvi tells him to come back before Sagar leaves. He agrees. Don’t hide anything from me that happens in the house. Janvi is thrilled