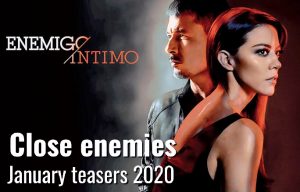 Two young siblings, Roxana and Alejandro, witness the murder of their parents at the hands of a Mexican drug cartel. Roxana is kidnapped and the twosome are ripped apart for life. 25 years later their paths cross and they are on opposite sides of the law and don’t realise they’re related.

Monday 20 January 2020
Captain Alejandro Ferrer and his men carry out an operation to stop drug smugglers entering the United States through a tunnel.

Tuesday 21 January 2020
Olivia tries to seduce Alejandro. Meanwhile, Agustín gives in to pressure from Marimar and Borges, and confesses to murdering Dulcita.

Wednesday 22 January 2020
The Chief of Customs is captured and tortured. In prison, Roxana has flashbacks to her childhood. Guillotina celebrates the death of Dulcita’s killer.

Thursday 23 January 2020
Zoraida blackmails Roxana, forcing her to become her slave. Meanwhile, Berebere ambushes Alejandro, and Carlos is shot down in the confrontation.

Friday 24 January 2020
Daniel enters the prison under the pseudonym ‘The Tilapia’. Meanwhile, Roxana offers La Puma money in exchange for leaving her alone.

Saturday 25 January 2020
Roxana and Daniel grow closer. Yair prepares for his assassination attempt against Alejandro, and points a rifle at him from outside the hotel.

Sunday 26 January 2020
Roxana is handed two drug packages by a firefighter, before being taken to the infirmary. At the infirmary, she hands the packages to Colmillo.

Tuesday 28 January 2020
Roxana is threatened by Bowser, who thinks she brought the drugs into the prison. Marimar tells Alexandro that she knows about his painful past.

Wednesday 29 January 2020
Roxana fires her lawyer, and demands that Federico help her get out of prison. Meanwhile, Guillotina sets a trap for Daniel.

Thursday 30 January 2020
Turco asks Ochún to keep an eye on Roxana. Meanwhile, Alexandro and Keller are both kidnapped, but only one manages to escape.

Friday 31 January 2020
Alexandro asks Olivia to investigate Marimar’s past. Marimar, meanwhile, quits her job at the prison and finds new work at a secondary school.

The Boss telemundo: Read events from the Season finale