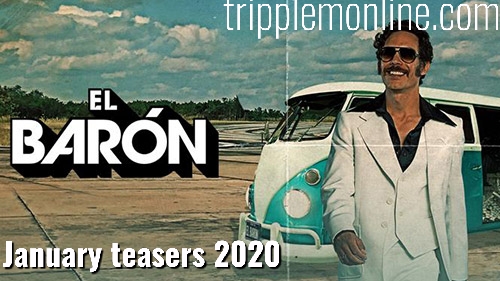 El baron is a new telemundo series on drug trafficking and cartels. Follow Nacho on his rise to become one of Mexican greatest drug Lord. El Baron January teasers 2020

Monday 13 January 2020
Ignacio ‘Nacho’ Montero is arrested for smuggling tobacco. His father pays his bail, but he must carry out community work in a Harlem library.

Tuesday 14 January 2020
In prison, Nacho sets up his new drug trafficking business. When he is released, sooner than he expected, he is deported to Colombia.

Wednesday 15 January 2020
Nacho goes to New York with Isabel, Kyle’s girlfriend, and they sleep together. Later, Nacho instructs Ramiro to smuggle the product into Canada.

Thursday 16 January 2020
In the midst of a shootout, the head of the DEA falls dead. Isabel and Nacho relocate to Miami, where they hope Kyle will not be able to find them.

Friday 17 January 2020
Pablo Escobar’s men recover the drugs that were stolen from Nacho and Liebermann. Meanwhile, Isabel leaves Nacho, believing that he is lying to her.

Saturday 18 January 2020
Griselda Blanco, leader of the Medellin Cartel, asks Nacho to work for her, but he has other plans. Meanwhile, Joe Fernandez decides to go to Miami.

Sunday 19 January 2020
An attack on Griselda Blanco’s cars brings death and destruction to Miami. Isabel gives Nacho and David all the information she found about Griselda.

Monday 20 January 2020
The success of their business allows Nacho and Isabel to buy luxury properties, but Madrina suspects that they aren’t dividing their profits fairly.

Tuesday 21 January 2020
Without enough fuel in their engine to land in Jamaica, Nacho and Liebermann drop the drug packages by the apartment where Marcela is staying.

Wednesday 22 January 2020
Marcela leaves a message for Nacho, and Isabel hears it. Later, Nacho and Escobar collaborate on a plan to avenge the death of Papo Mejía’s father.

Thursday 23 January 2020
Madrina teaches Sonny about weapons so he can defend the family. Nacho and Isabel argue after Isabel suggests it’s time to leave the drug business.

Friday 24 January 2020
Nacho and Drake undertake the dangerous mission of getting Mejía out of the hospital. Meanwhile, Toto is interrogated by Joe Fernandez.

Sunday 26 January 2020
After the confession of Sonny, Madrina orders her men to try to get a confession out of Judy. Nacho arrives in Medellín with Darwin and his son.

Monday 27 January 2020
Griselda pressures Ochoa to divulge who helped Darwin to escape with his son. Torres tells Joe that Griselda is responsible for Toto’s death.

Tuesday 28 January 2020
Justin, at the gates of La Juerga, recognises the police officer who killed Richie. Meanwhile, Marcela and Nacho kiss, and he promises to visit soon.

Wednesday 29 January 2020
Zamora is injured in a shooting, and goes to the hospital. Isabel and Nacho fight after she finds out about his affair with Marcela.

Thursday 30 January 2020
Nacho is furious when he sees Isabel and Kyle dancing together, and pulls out a gun. Meanwhile, Madrina receives information on her son’s location.

Friday 31 January 2020
Sonny tells Madrina that Nacho was the pilot of the plane that took him to Colombia. Carlos Ledher, from Colombia, summons Nacho to a meeting.