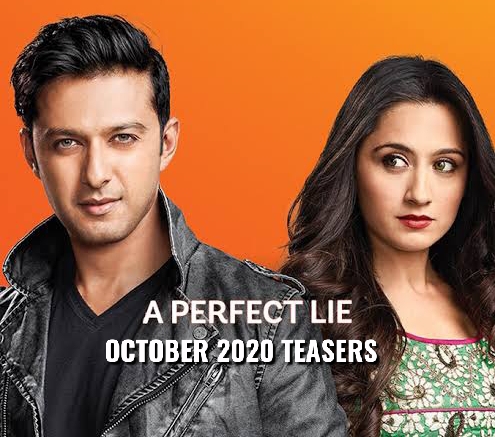 A perfect lie returns October 2020 on Starlife, here are the catch-up teasers for where the series stopped and new teasers for fresh episodes.

Dev visits Dr. Dayal to learn about the missing pages of Nitya’s diary, but in vain. Meanwhile, Durga takes Shaurya to a dhaba, where he mixes a drug in her lassi. Later, Durga’s associate collides with Shaurya deliberately.

At the Dhaba, a few goons, who Durga had hired, provoke Shaurya to fight with them. They end up brutally beating Shaurya. Durga calls Dr. Dayal and makes Payal listen to Shaurya’s groan. Meanwhile, Dev sneaks into Dr. Dayal’s house in his absence.

On learning about the attack on Shaurya, Sakshi and Rajnath instruct Durga to bring Shaurya back to Kolkata. The Goenkas visit Shaurya in the hospital where Durga narrates the entire incident. However, Sakshi refuses to believe Durga.

While trying to get up, Shaurya panics as he feels that his lower body is paralysed. Sakshi continues to suspect Durga’s hand behind Shaurya’s plight. Durga is elated to learn Shaurya will spend the rest of his life in a wheelchair.

The doctor informs the Goenkas that he will try his best to heal Shaurya. However, Shaurya does not cooperate with the doctor. Later, Sakshi comforts him. Meanwhile, Durga assures the Goenkas that she will still marry Shaurya.

Despite his condition, Shaurya remains adamant about winning the bet. He asks Sakshi to find his offenders. Shaurya also tells Sakshi that he knows that she was behind the attack on Payal.

Sakshi criticises Karan and his friends when they visit Shaurya in the hospital. Meanwhile, Rajnath visits the priest in jail who informs him that he predicted Durga’s future on Sakshi’s insistence. Later, Dev is delighted to see Payal respond to him.

Durga is elated to see Payal respond to her. Dev confronts Durga about Nitya’s whereabouts. She hesitates to reveal the truth to Dev, who is also curious to learn about the secret room in Durga’s house.

After searching Nitya’s house, Dev manages to find his locket. Later, Dev sees Mr. Agnihotri who presented Payal’s case in the court with Karan and grows suspicious of him.

The Goenkas start preparations for Durga and Shaurya’s wedding. Kangana asks Dev to help her with the wedding but its in vain. Meanwhile, Karan persuades Shaurya not to marry Durga. However, Shaurya is upset when Durga offers him flowers.

Durga learns about Payal’s absence from the rehabilitation centre and panics. Dr. Dayal and Durga reach Payal’s house where they see her with Dev. The duo confront Dev for bringing Payal out of the hospital.

Dev questions Durga for visiting Nitya’s house in search of Payal. Dev suggests that Payal should stay in her house to ensure a speedy recovery. Meanwhile, Shaurya has a nightmare and falls off his cot.

Shaurya’s condition continues to frustrate him as a few guests mock him. An irked Shaurya leaves the rituals halfway and returns to his room. Shaurya recalls Sakshi and Karan’s suggestion of cancelling his wedding with Durga.

Kangana wonders where Payal’s family used to live. Raima confronts her ex-husband for not giving alimony. Dev vows not to visit the temple if he fails to find out the truth about Nitya. Durga and Dr. Dayal brief the fake priest and Aakash about their plan.

Dev believes that Nitya is alive. Meanwhile, Karan bets with his friends that Shaurya’s wedding will be cancelled. He provokes Shaurya not to get married. On seeing an elated Durga, Shaurya grows suspicious. Later, Shaurya refuses to marry Durga.

Dr. Dayal tries to convince Shaurya to marry Durga. Shaurya lies to them that he does not deserve Durga. Dr. Dayal confronts the Goenka family for cancelling the wedding. Sakshi suggests Dr. Dayal get Durga to marry Dev.

Sakshi asks Dev to marry Durga, but he refuses. Durga tries to convince Shaurya to marry her, but in vain. Meanwhile, Dr. Dayal convinces Durga to marry Dev. However, Suchitra supports Dev’s decision.

Dev and Durga’s wedding rituals take place. Dr. Dayal assures Dev that he will keep his promise of revealing Nitya’s whereabouts. Meanwhile, after welcoming Durga home, Sakshi informs Shaurya that she got Durga married to Dev in order to keep an eye on her.

Sakshi leads Shaurya to believe that Durga is responsible for the family’s plight. She also believes that Nitya is alive. Dr. Dayal informs Durga that he has assured Dev that Nitya will be meeting him on her birthday.

Durga blackmails Dev to leave Nitya’s house and return to the Goenka house. Meanwhile, Durga is shocked to see Shaurya in her bedroom and confronts him. Sakshi decides to publicise Durga and Dev’s marriage.

Dr. Dayal invites the Goenka family to his house for a ritual. Rajnath decides to take Raima out on a holiday. On learning that Shaurya visited Durga’s bedroom, Suchitra instructs him to stay away from Durga.

Dev, disguised as an astrologer, informs Mr. Agnihotri that he will grow richer. On the other hand, Aakash disguies himself to reveal the truth behind Raima’s affair to Jatin. Meanwhile, to test Aakash’s loyalty, Sakshi instructs him to trap Durga.

Dev demands that Dr. Dayal must prove that Nitya is alive. Meanwhile, Aakash informs Dr. Dayal about Sakshi’s intention. An armed Aakash arrives at the location, where Sakshi has asked Durga to come to.

Dev asks Durga to deliver a pair of earrings to Nitya. Meanwhile, Aakash hands over evidence of Raima and Rajnath’s affair to Jatin, for free. Dev learns about the deal between Rajnath and Mr. Agnihotri in Payal’s case.

Raima tries to mend her relationship with Sakshi. While feeding Payal, Dev informs her that he will meet Nitya soon. Meanwhile, Jatin shows video footage of Rajnath and Raima’s private moments to Sakshi.

Dev learns that Rajnath is aware that he sold his shares. Durga tries to learn the truth behind Dev’s move. Rajnath decides to foil Dev’s plan, and calls Mr. Agnihotri. Meanwhile, a miffed Sakshi vows to take revenge on Raima and Rajnath.

Durga decides to make Sakshi believe that Raima influenced Shaurya and Kangana, and invites her to the Goenka house for Karva Chauth. Meanwhile, Rajnath offers a cheque of Rs. 15 crore to Dev, but he refuses it.

Dr. Dayal appoints Raima as the public relations head of the cancer hospital project. Dev, who is in search of Mr. Agnihotri, is instructed to return home for Karva Chauth. Durga performs the rituals with Dev.

In an argument with Sakshi, Raima mentions Payal’s name. While Rajnath confronts Raima, Dev decides to learn about Payal from her. Meanwhile, Suchitra reminds Dev that Shaurya has been declared innocent. Later, Rajnath decides to send Suchira and Dev to the US.

In a letter handed over by Durga, Nitya asks Dev to stay away from Payal’s case. Sakshi sends texts to Dev from Raima’s phone. When she shows Raima the video footage, Raima informs her that Rajnath wanted to marry her.

Dev informs Durga about Raima and takes her to the hospital. Sakshi informs Rajnath about the attack on Raima. Durga tells Sakshi that Raima is still alive. Meanwhile, Raima’s maid accuses Dev of the attack. Will Sakshi be exposed?