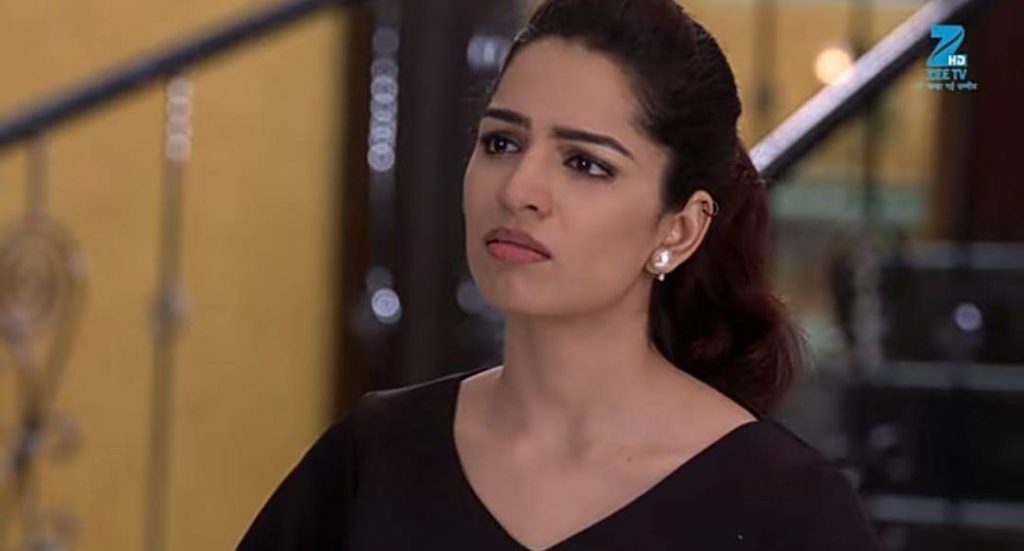 Purab says it was my destiny to meet you. Sangram Singh says he will molest her and holds her dupatta. Disha asks him to leave her. Sangram Singh says let me hold you first. Disha shouts for help. Purab sits in car and drives fast speedy car towards the goons. He asks Disha to sit fast.

Disha sits in car and picks chilli plate and throws on the goons. She thanks Purab for saving her. Purab says I got this strength from you, I know you, but you have saved me without knowing me.Abhi thinks to surprise Pragya and decorates the room.

Munni comes to the room and thinks why the room is looking like garden and thinks if there is some festival today. Abhi comes and asks if she liked his surprise. Munni says good and asks it is for whom? Abhi says for you. He says this is not for your welcome, and asks her to tell. Munni says what to tell. Abhi says today is your first night.

Munni asks what did you say? She says it can’t be your first night and says it is my first night, as I came here. Abhi says her sense of humour got better. She asks him to celebrate his birthday. Abhi asks if she really don’t understand or trying to find ways to make excuse. He says today is their marriage first night.

Munni thinks he is talking about wedding night and gets tensed.Munni tells Abhi that her foot is paining. Abhi says he will make it fine. Munni says it is a sin if husband touches wife’s foot. Abhi says it is enjoyment and goes to bring ointment. He brings ointment.

Abhi and Munni’s conversation. He asks if she is scared as he is getting closer to her. Munni says she can’t explain her and asks him to stay away from her. Abhi locks the door and says she has no option. Munni thinks to attack him to stop them from getting romantic and thinks she is not Pragya.

Disha tells Purab that goons are behind them. Purab asks her not to worry and makes the goons fall down from bike one by one. Disha says this is the best drive of her life and he is riding car as Hritik Roshan. Purab drives the car and they reach market again. Sangram Singh shoots at them. Disha says I told you that they will not leave
us.. Sangram Singh punctures the tyre. Purab manages to drive the car.

Sangram Singh follow their car, but he is stopped by the truck. He gets upset as Purab and Disha manage to escape.

Abhi tries to get closer to Munni. Munni stops him and says she is feeling unwell. Abhi says she must have told him and asks what is bothering her. She tells him that something is bothering her and tells that she is not comfortable. She says she will come to him when everything is fine.

Abhi says when you are not comfortable, we will not make love, he says I will not sleep in this room, call me whenever you are comfortable. He asks her to sleep well and goes. Munni thinks he is a good man and she is doing wrong with him and apologizes to God.

Sangram Singh gets Purab’s car. Goon says car is empty, it seems they have escaped. Goon says guy is from other city, but I know girl’s address. Sangram Singh says lets check in her house. Disha takes Purab to her school in the night. Purab says it is good, now you don’t have to come in the morning. She says she wants to learn car driving from him and asks from where did he learn to drive fast.

Purab says he drove the car fast for the first time. Rain starts. Sangram Singh’s goon check in her house and tell that she is not there. Sangram Singh says a teacher hides in school while Pandit hides in temple. They get inside the temple. Purab gives his jacket to her. He sees the firewood and asks who lighted this fire. Disha says may be watchman. He thinks this girl is so good, and wishes best for her. Disha also prays for her and wishes best for him.

She tells him that she gets drenched in rain and likes it. Purab asks her not to get unwell and says I really need you, as I don’t know this place. She says when rain stops, we will go to our house, and tells that she stays with her father and bua.

She tells that Kanha ji was jealous of her mum and that’s why taken her mum. She tells that his father has taught him and made him independent. She says don’t know what they will do after I get married. She asks about his family.

Purab tells her that he is an orphan and his parents died when he was a child. Later Bulbul, a cute, bubbly girl came in his life, but God had snatched her too.

Disha and Purab see Sangram Singh and his goons coming to school. Disha says they are very dangerous. Purab says we have to hide here itself. Just then light falls on them.

Disha and Purab look out and think that the goons are gone, but Sangram Singh and his goon are hiding out. Goon is about to shoot them, but Sangram Singh nods no. Purab tells Disha that he couldn’t shout when goon stepped on his hand. Disha nurses his hand. Purab looks at her. He says shall I rest for sometime. Disha says you are asking me as if you are my class children and says ofcourse you can rest. Purab asks her to rest too.

Tanu switches off lamp on and off. Aaliya says she wants to sleep. Tanu says she couldn’t sleep thinking about
Munni and Pooja. Aaliya asks her to sleep and not to worry. Tanu thinks to sleep.

Munni thinks why  haven’t Abhi come till now. She thinks what Dadi will say if she comes to know that he slept out. She finds him on the sofa and calls him politely. When he don’t wake up.. She hits him. Abhi wakes up scared. Munni says she has beaten the mosquito. She asks him to come to room. Abhi thinks now it will be suhaag din and gets happy.

They go to room. She asks him to sit and says if anyone comes to know that we are sleeping separately then they will think bad. Abhi says it is good that you have changed your mind in one night, room is decorated with flowers still.

In the morning, Purab and Disha wake up in the school. She cleans her clothes and says mud is stuck to it. Purab says today it is your marriage. Disha says yes, and tells that her to be husband works in bank, she has an arranged marriage.

Purab tells her that Pragya was a teacher and she has changed Abhi’s life. She says your to be husband is also lucky. He says infact I am also lucky. Disha says my Papa also tells that life is a full circle and he would be waiting for her. Purab offers to drop her home.