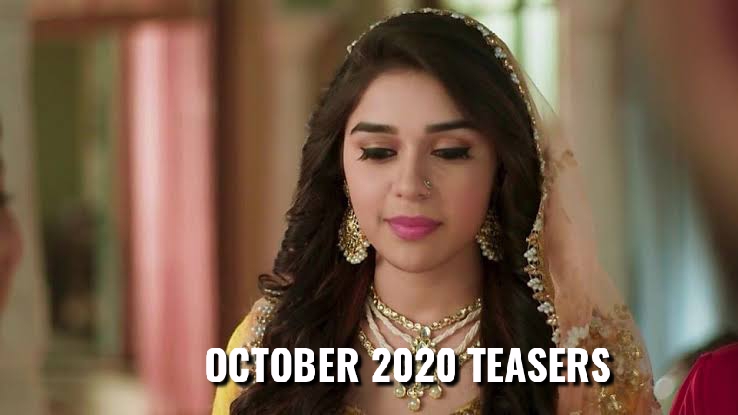 Zara’s Nikah October teasers 2020: Kabir and Zara cannot stay happy for long as new issues and people continue to tear them apart, how long can Zara continue to play the peace keeper?

Zara’s tells Kabir to differentiate between their work and marriage so that friction can reduce in the relationship. Meanwhile she is determined to submit her file for the girl education project. At home, Ruksaar goes missing and she is later found at her old school.

Kabir and Zara return home and they are sad to learn about Rukshar amnesia. Ruskaar in her childish behavior insists to live with Zara’s as her new friend, what could be her motive?

Ruskaar gets into an accident causing Zeenat to get angry with the family for neglecting her. Zara decides to take up her responsibility.

Ruskaar keeps trying to make strange demands from the couple using her amnesia as an excuse.

Rukshar calls Kabir her husband surprising everyone. Ayesha warns Zara to be wary of her. Meanwhile Kabir and Zara are still at loggerheads over funding for the girls school project.

The Sharia board members are torn between getting a modern syllabus for the girls or using the old one as against Zara’s wish.

Zeenat insists for Amaan to school at Mandrasa where Kabir schooled despite her husband protest. Zara and Kabir argue about the discrimination prevalent in Mandrasa.

The house is divided when Kashan vehemently refuses for his son to study at Mandrasa with Zara’s supports. Zeenat accuses Zara of trying to break the family yet again.

Kashan and kabir get into a heated argument with Kashan accusing him of overriding him in the family. Salma comes to defend her daughter but it backfires on Zara. Her relationship with Kabir is once again strained.

The women of the family give out their jewellery so that Zara’s 10 million can be paid. Kabir takes the money to Salma and promises to pay all the money Zara lent him. He tells Zara to remain at her parents house if she wishes.

Irfan and Salma comes to apologise to Kabir but he still proved arrogant. Later Kabir takes over Rukshar responsibility from Zara.

Kabeer sleeps in ruskaar room after sending Zara out. Once again Zara is heartbroken.

Zara’s falls unscious after kabirs rejection and the familyis worried. The couple drift apart even as Zeenat tries to make Rukshar more attractive to Kabir so he can split the couple apart

Ruskaar remembers she was engaged to be married to Kabir, could her memory be returning? Kabir’s anger continue against Zara even though he misses her. Zara is still set to pacifying him once again.

Kashaan reveals to Kabir that the household expenses is all on him. Meanwhile the women try to reunite the warring brothers.

Zara’s sets out to sell the jewelry and get her dowry money, also she asks Shahbaz to rent out the outhouse to her.

Seems Rukshar condition is returning to normal. There’s a controversy on the need to pay Zakat. While Kabir is in support, Zara questions him.

Shabhaz tells the Qazi that Kabir might step down as Vice president. Zara and Kabir go for an outing, what could he be up to?

Ayesha sets Kabir clothes on fire as a form of manipulation against Zara. Shahbaz has a shady deal with Mr Thomas and he’s back for his money. Kabir supplies blanket to the poor using money gotten from Zakat.

Zara’s snoops around Shabaz file to find what he’s been hiding. She confronts him and compels Kabir to accompany her to Tikona maidan

Zara is kidnapped and Kabir rallies around to pay her ransom money. However shabaz manipulates a video showing that Zara had stayed her own kidnap causing the couple to drift further apart.

Ruskaar discovers she’s Kabir second wife and Zara is benelovent enough to let her live with them. However Ayesha tells her to be wary as this could lead to problems in their relationship.

Kabir is back to been a repentant husband, he observes a fast to show his remorse. Rukshar slips away During an outing with the couple, what could she be up to?

Zara is blamed for ruskshar missing but Kabir defends her. Azib withdraws his interest in the business with shabhaz.

Ruskaar demands to remarry Kabir. Kabir apologies to Salma for his past offence and shabhaz is disgraced at the event by Tabu

Zara’s comes to the defence of her father in-law. Zaras presents a new proposal at the sharia board meeting concerning zakat usage.

Zara’s takes up the responsibility of paying fatima tuition despite shabhaz kicking against. Zeenat thinks it’s all manipulation.

Zara falls sick and kabir sells another of his possession to bring her to health.

Kabir learns of the debt his father had incurred, he decides to earn money for a change. Shabhaz is worried that his dreams for Kabir won’t be realised.

Rukshar plans to kill Zara while on her sick bed. While Kabir is bent on working as he and Imran take up menial jobs

Kabir reveals a video footage of Zeenat spiking Zara’s drink. Zeenat is kicked out but in a twist kanchan defends his wife and tells his family to leave the house because he owns it.

Zeenat sends Kabir on menial errands,but the couple are not faced.

Zeenat informs everyone that she has found a suitor for Alina. Kabir discovers it’s none other than Sameer who had assaulted alina previously. Irfan is resigning from the Qazi post and Kabir will be the next

Sameer threaten to kill shabhaz if Alina refuses his marriage proposal. Kabi seeks the help of the police to exonerate his father.

Alina engagement ceremony begins amidst threats and blackmail. Zara tells Kabir how she intends to stop the wedding but Kabir rejects it.

Kabir calls Ariz for help to no avail. However he manages to free Alina from the deceitful wedding.

Kabir is angry that Alina is mingling with Aamir. The strained relationship between Kashan and the rest of the family is affecting Their son Amaan.