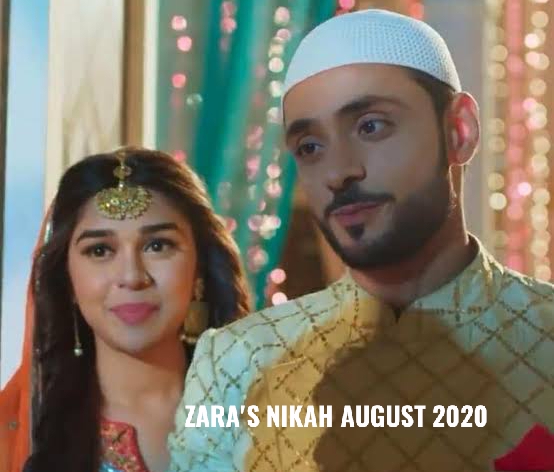 Zara’s Nikah August teasers 2020: Kabeer’s mind is set on divorcing Zara after their misunderstanding while Zara discovers a secret about Miraj.

Zara and Kabeer have a disagreement about women praying at the mosque. Their disagreement causes a huge rift between them.

The Shariah Board is discussing the matter that involves women praying in mosque.

Women are allowed the time to pray at the mosque in the presence of men. War breaks out between Kabeer and Zara.

Irfan personally informs the Ahmads that a notion has been passed against Kabeer for defying the Sharia Board’s decision. He further reveals that the women who had witnessed Kabeer’s statement have to testify against him.

Kabeer and Zara are getting along fine but meanwhile their fathers are at war with each other.

Kabeer and Zara’s relationship hits a rough patch again and this time around it looks like it is beyond repair.

Ayesha asks Shehbaz to let her handle Zara and Kabeer’s matter in her own way. Ayesha moves into Zara’s house.

Zara and Kabeer are experiencing a rough patch in their relationship, the situation is not getting any better anytime soon but only time will tell.

Zara saves Kabeer from a dark cloud but Kabeer is still angry at Zara.

Zara and Kabeer are keeping their promise to enjoy the last few days of their marriage. Zara and her family get the shock of their lives.

Zara is declared missing after being embarrased at Kabeer’s project launch. Kabeer feels guity and responsible for Zara disappearance.

Kabeer and Zara are mending their broken relationship.

Zara is sadden by the news that she only has 24 days left as Kabeer’s wife. Kabeer haven’t changed his mind abou divorcing Zara even though the last days have been fun for the couple.

Meraj has a proposal for Zara and he also reveals his real identity. Zara is trying all means to stop Miraj’s plans.

Meraj publicises his feelings for Zara. Meraj is counting on Kabeer to divorce Zara so that he can marry Zara.

Zara finds hard evidence that supports her claims that Rukhsar was behind everything bad that happened to her and Kabeer in Kashmere during their honeymoon. Rukhsar and Miraj are determined to stop Zara before she exposes Rukhsar.

Meraj reveals his true intentions and Zara was right about Meraj being a bad person. Meraj threatens to kill Kabeer if Zara was to tells a soul about his secret life.

A trap is set for Meraj and he bites. What will Kabeer do after finding out about Meraj’s dark side?

Meraj flees the scene before a call for his arrest is made. Meraj makes a counter claim against Kabeer stating that Kabeer is misusing the project funds and he wants his money back.

Meraj tells Nilofer to become Zara’s friend, and to then kill her as soon as Kabeer cancels his divorce. Will Nilofer be loyal to Meraj or Zara?

Zara and Kabeer are working together on a case about Nikha Halala. Zara meets a woman who has been treated unfairly under this law. Will Zara go against her husband to help this helpless woman?

Kabeer comes up with a plan to fish out the traitor in his team that is working with his enemy. Will Kabeer be successful in his plans?

Mr Hashmi tries to convince Kabeer to debate in favour of ‘nikah halala’ as it is an age-old tradition. On the other hand, Irfan tries to warn Kabeer from getting involved with Mr Hashmi. Who will Kabeer listen to?

Kabeer is determined to do anything to reunite Zara with her family but his biggest challenge is that he has limited resources to help her escape. Will Zara and Kabeer escape without being injured or even killed?

Zara causes an uproar after she presents a case about Nikha Halala to the Sharia board saying that it should be abolished. Nilofer blackmails Meraj with the information she recently gained. Instead of conceding, Meraj stabs her with a pocket knife. Will Nilofer die from the stab wound?

Zara reaches Sharia’s Board and presents all the evidence she had gathered in Abidah’s case. She then puts forth a request to abolish the tradition of ‘nikah halala’.

The Ahmad are hosting a party when Mr Hashmi humiliates Zara but Kabeer comes to her rescue and gives him a befitting reply.