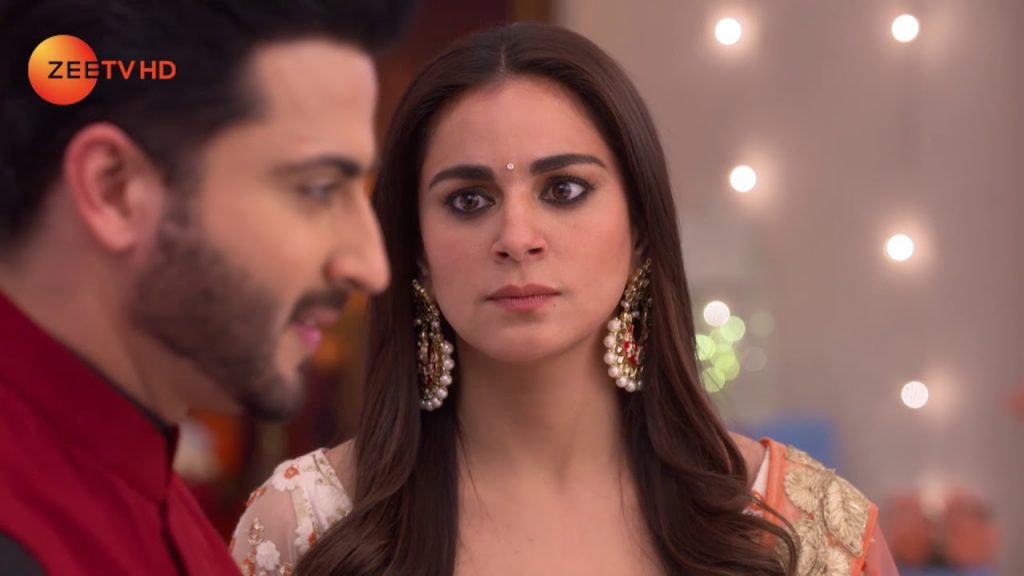 Shrishti is excited to see Karan and Preeta together, she says they must cancel everything at Prithvi’s house. Preeta is afraid, Shrishti regrets drinking so much in a time of excitement. She fells on the bed and fell sound asleep. Preeta turns to face Karan, she clarifies she holds nothing for him as she got a good proposal from Prithvi.

Mr. Luthra says it’s Rakhi who makes him realize her love; whenever he looks towards his children they appear as a gift from her. A eunuch blesses Preeta and Karan as a couple. Preeta was afraid of the blessing and goes behind him. Karan comes behind Preeta and assures she will marry Prithvi soon and he won’t marry ever. Preeta says she was afraid because it’s Karwachot. She turns to pass by him, her dupatta fly over his face. She forbids him worry as such scenes only happen in films, and they are surely never going to marry. She drags him to the car, he was lost in some thought.

Kratika calls Akshay, he was getting ready to come to her place. She says he is already handsome, he complements she is prettier. Kratika reaches the corridor and was left awestruck by the decoration. She comes to appreciate her. Kareena says she wants to make the day memorable for her and Sherlin. Kareena sends Kratika to take rest, Kratika hugs her saying she is the best mother of the world. Kareena thinks she made this decoration only to show Shrishti that she is a much better interior decorator.

Preeta scolds Karan for driving slow, and they got really late. A servant hits Karan and the juice spills over his dress. The servant apologizes, Preeta says Karan must apologize. Karan was furious, he drags Preeta into the room. She was intrigued as he bolts the door.

He comes to her and orders her to remove his jacket. He says he has pain in shoulder and won’t be able to remove the jacket. Preeta asks if that’s the reason he brought her to his room, Karan says he didn’t want Sherlin to watch her. He will make up that he needed physio for shoulder ache later on.

Preeta finally removes the jacket. Karan takes another dress to washroom. Preeta watches his photo-shoot and thinks this guy is filled with arrogance. Karan comes out, he tells her to focus on their mission and follow her, warning her only not to get caught.

Sherlin felt hungry and thinks about breaking her fast. She thinks it would be trust-breaking with her baby; then thinks about taking his permission to eat something. In the corridor, Preeta tells Karan they must make a recording and play the video in the evening today. Kareena hears Preeta and Karan together in the corridor. Preeta was also shocked to see her.

Kareena was irked and asks what’s happening here. Karan says he had pain in his shoulder, so thought about getting some massage from her. Preeta explains everyone is against her in the house, she couldn’t treat him in closed doors nor in the hall. Karan takes Preeta to the hall for some massage. They discuss Preeta created a misunderstanding in the mind of Kareena. There, Kareena decides to keep an eye over them