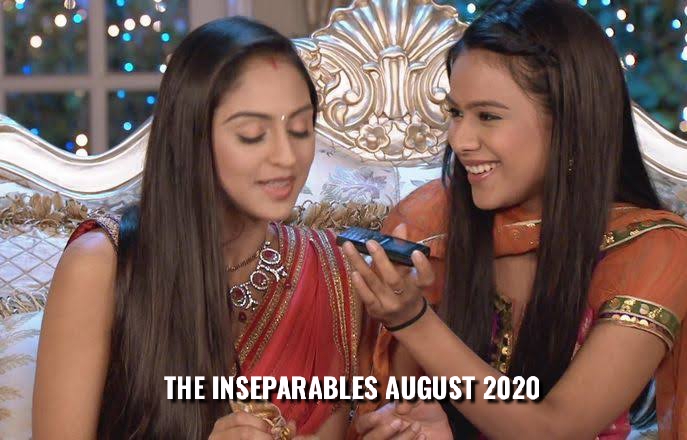 The inseparables August teasers 2020: It is chaos at Vadhera House as they try to manage both Shree’s and Vikram’s parents. Will the family manage to sustain the drama and get the lovebirds married?

On Pinki’s advice, Ragini creates a fake story to get close to Shivaay! Tej misleads Janhvi and meets Svetlana. Om, Shivaay and Anika plan to bring Bhavya and Rudra together.

Sweety agrees to do all the puja arrangements, but she goofs up on many ends. It is Jeevika who then fixes up everything and gets Beeji to conduct the puja. Viren and Viraat take Daboo out and convince him to ignore Sweety.

Viraat and Jeevika assure Sweety that Daboo will never cheat on her. Maanvi asks Sumi to continue to the drama. Sweety hears Daboo have romantic conversations with Sumi over the phone.

The Chaudhary family decides to leave the house and hand over the property to Sweety. Beeji requests Sweety take care of Daboo. Sweety realises her mistake and seeks forgiveness.

Jeevika and Maanvi come back to Chandigarh. It is Jeevika and Viren’s wedding anniversary the next day. Jeevika thinks Viren has forgetten about it and Viren feels vice versa. Is there a surprise in store?

The Vadhera family plans for a surpise party for Jeevika and Viren. Everyone enjoys the party. Viraat introduces his family to his friend, Vikram. Viraat’s friend has a problem and requests the Vadheras to help.

The entire family is gearing to play the role of a South Indian family. Dadaji assigns each person a role and tells them to research on Shree’s family. Shree is in for a surprise.

Maanvi introduces her family to Shree’s family and tells them about Vikram and her love. It looks like everything will go well as Swamini too joins their plan. The two families have breakfast together.

The two families go ahead with their plan to separate the pair. A fight at the dining table gets out of hand. Shree and Vikram decide to break up. But the Vadhera family will not give up so easily.

Jeevika is disturbed with the findings of the gynaecologist. Viren chooses to hide it from his family. Maanvi blames herself for Jeevika’s problems.

Viraat and Maanvi accompany Jeevika and Viren to the clinic. Everyone is thrilled about the baby. Viraat plans to make Maanvi jealous but is unsuccessful.

Next: September on the inseparables