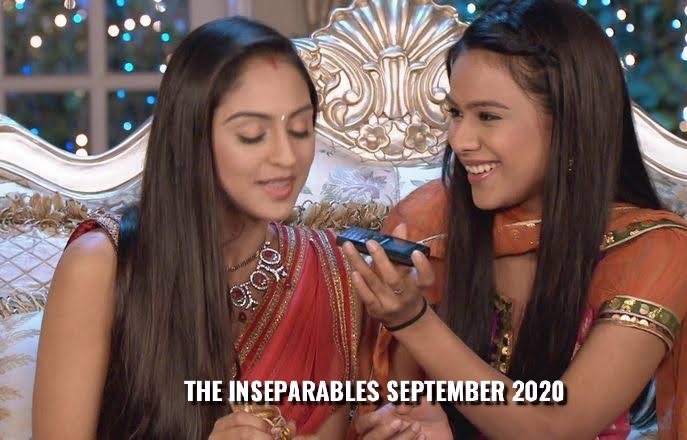 The Inseparables September teasers 2020: Maanvi does not want the family members to know about her pregnancy. But fate has different plans. Vanshika finds the pregnancy kit in the garden and thinks it’s Jeevika who is pregnant.

Viraat finishes his recording and the director promises to release his album. He wants to share this news with Maanvi and buys her, her favourite chocolate cake. Vidhi talks to her doctor and tells her to not disclose the news to Jeevika. She calls the entire family together to share some news.

Viren is worried about Viraat and Maanvi’s relationship. Viren wakes up in the night to see Vidhi hungry and brings food for her. Maanvi sees the two together.

Jeevika advises Viraat to deal with Maanvi patiently. He cancels his interviews to accompany Maanvi for her sonography test. Meanwhile, Jeevika panics on finding Vidhi missing.

Jeevika feels guilty of suspecting Vidhi and assures her that it will never happen again. Viren and Jeevika are thrilled to know about Vidhi’s sonography. Viraat does not come for Maanvi’s test and Jeevika accompanies her instead. Viren stays with Vidhi.

Maanvi lies to dadaji about Viraat being with her during the test, but he overhears her telling the truth to Jeevika. Meanwhile, Viraat accepts an offer to go on a musical tour, leaving Maanvi devastated. Viraat goes to apologise but Maanvi has already left the house.

Maanvi ignores calls from Viraat. He, along with Jeevika, goes in search of her. Vanshika asks Vidhi to stay with them until Jeevika gets back.Where did Maanvi go?

Maanvi informs her family that she will not return. Viraat apologises to Maanvi but she refuses to forgive him. She requests Jeevika to stay away from her problem.

Viraat vows to persuade Maanvi and take her home. Jeevika stays back with Maanvi. Viren takes care of Vidhi in her absence. He offers to sleep in her room. Vidhi is happy. Meanwhile, Viraat is missing from the house.

Viraat returns with gifts for Maanvi and requests for forgiveness. Maanvi agrees but on the condition that he will prove to be a good father. Jeevika decides to go back home to take care of Vidhi.

Vanshika sees Vidhi cooking for Viren and suspects her to have feelings for him. Meanwhile, Viraat loses the doll and Maanvi finds it in the washing machine. She gets upset. Will she give him another chance.

Jeevika helps Vidhi get dressed for the party. Vanshika and Jeevika see Viren hugging Vidhi and get worried. Meanwhile, Maanvi and Viraat go to see the doctor who tells her about the complications in her pregnancy.

Vidhi is insulted by a guest at the party and Viren comes to her rescue. Maanvi conspires to make Viraat lose the challenge. Daboo mixes sleeping pills in Viraat’s drink to help her. Suddenly, Maanvi faints.

Viraat blames himself for Maanvi’s situation and decides to leave the house. Beeji and Pinky stop him from doing so. Vidhi feels affection towards Viren. She fixes a loose button on his shirt but Vanshika intervenes.

Vanshika warns Viren about Vidhi’s attempt at separating him and Jeevika. He decides to tread with caution. Vidhi is unhappy seeing Jeevika and Viren together. Beeji asks Maanvi and Viraat to resolve their conflict and locks them in a room. Will the two profess their love?

Viren tells Vidhi to not misunderstand his concern for her.He convinces Jeevika to go on a second honeymoon. Meanwhile, Maanvi and Viraat meet the doctor. He tells them their baby could be born disabled. The decision is theirs.

Maanvi and Viraat decide to keep the baby. Beeji is proud of them. Maanvi hides it from the Vadhera family. Viren and Jeevika go on a holiday. Vanshika asks Vidhi to not bother them.

Vanshika is upset with Vidhi and refuses to eat the breakfast she made. She does not find Vidhi in the house and instead finds a letter from her. The doctors inform that Maanvi’s baby is fine but she is not.

Viraat leaves for Chandigarh to help Vanshika find Vidhi. Beeji gets a call from Jeevika and Maanvi’s father. Badi Beeji insists that Beeji tell them the truth about their father.

Viraat and Vanshika go looking for Vidhi. Maanvi and Daboo meet Monty at a pizza joint. She tells Beeji about it. Jeevika and Viren surprise everyone by arriving a day earlier.

Viraat and Vanshika bring Vidhi along with them. Jeevika and Viren give her a gift. Viraat leaves for Rishikesh and tries calling Maanvi but gets no response. Daboo finds Maanvi lying unconscious.

Maanvi meets Monty at the hospital canteen and he tells her about his kidney problem. She encourages him to approach his family. Vidhi fears the Vadhera family will come to know about her truth.

Maanvi is in a dilemma regarding Viraat’s musical tour. Vidhi’s mom comes to Vadhera house to wish her daughter on her birthday. The family then decides to celebrate her birthday. Swamini gifts Vidhi a pair of gold bangles.

Vidhi is unable to take the burden of her past. She gets a call from her husband and faints. Viren promises to keep her happy. Maanvi is discharged from the hospital and she stays with Beeji.

Viraat informs his family about his world tour. Jeevika overhears Vidhi’s conversation with her mother and gets upset. Meanwhile, Maanvi takes lunch for Monty. Will Beeji discover Monty’s reality?

Viren bring home his friend, Harshad. He introduces him to Vidhi and Harshad is immediately smitten by her. Viren tells him that Vidhi is the surrogate mother of his child. Harshad desires to marry her.

Monty informs Maanvi about meeting his family. On reaching home, he hears Beeji asking Badi Beeji to avoid discussing him. He decides to leave. Meanwhile, Harshad wants Viren to speak to Vidhi about him, but he is unsure. Jeevika agrees to speak to Vidhi. What will be Vidhi’s reaction?

Vidhi confesses to Viren about her marital status. He tells him about her husband’s nature. She promises to tell Jeevika the truth.

Jeevika introduces Harshad to Vidhi, who is shocked on seeing him. Daboo finds Monty’s picture in the storeroom. Monty asks Beeji for forgiveness. She asks him to leave. Maanvi is surprised to see Monty.

Monty is dejected at not being able to reveal his identity to Maanvi. Beeji tells him to stop coming home or meet Maanvi. Harshad harasses Vidhi. Viren learns that the surrogacy agreement needs Vidhi’s husband’s signature.

Viren informs Harshad that Vidhi is already married. Meanwhile, Daboo finds out that Monty is Maanvi’s father and confronts Beeji. She asks him to keep it a secret.

Badi Beeji does not want Maanvi to meet Monty but she refuses to leave him at that juncture. Monty regrets leaving his wife and children. He receives a call from Beeji to stay away from Maanvi. Jeevika sees Viren consoling Vidhi.

Jeevika shares her suspicion with Maanvi. Harshad suspects that Vidhi likes Viren. He tells Viren that her husband needs to be paid Rs 5 lakh for signing the paper. Viren arranges for the money. Harshad offers to keep it.