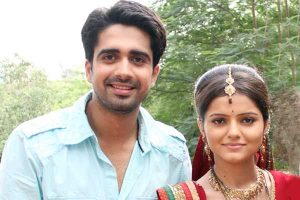 The daughter in-law on zee world explores a love triangle between two sister and two brothers whom they fall in love with.

The series is set to show on zee world

Shastriji and Devki live in a Vrindavan, and they have two daughters, Radhika (Rubina Dilaik), who is an adopted child, and Vishakha Shashtri. Radhika is simple and dutiful, whereas Vishakha wants to be an actress in Bollywood. She is headstrong and selfish. Vishakha and Radhika share a close bond.

The Purohits on the other hand are a well to do family from Delhi and have their ancestral home in Vrindavan. They have two sons – Vivek and Dev. The Purohits have great expectations from Dev who falls in love with Radhika. But fate wills otherwise, and he thinks he marries Vishakha due to a confusion.

The story takes a dramatic turn when Radhika enters Dev’s house, and the stage is set for an unusual love triangle, with each character grappling with peculiar dilemmas.