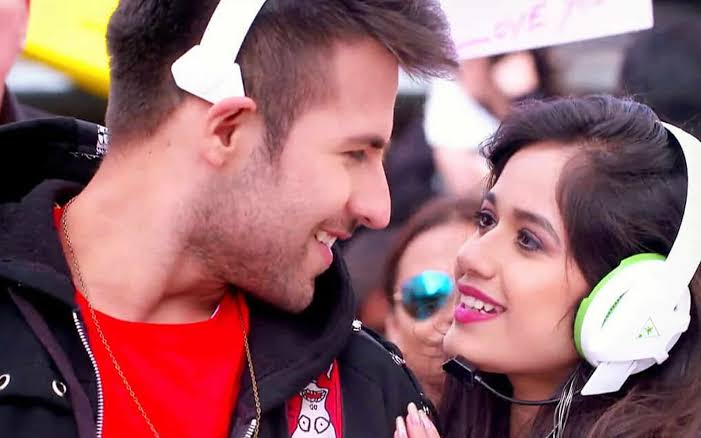 The Cost of love replaces true love on Glowtv by Tuesday 9 February 2021. It’s a romantic musical drama following the life of a wannabe hit musician Ahaan and Pankit a simple girl forced to marry a rich man by her mother…  The series is produced by Mahesh Bhatt under Gurudev Bhalla production house. It stars Jannat Zubair Rahmani, Ritvik Arora and Rahil Azam as Pankti, Ahaan and JD respectively.

The Cost of love full story:

Pankti Sharma is a beautiful and talented young girl, while Ahaan Dhanrajgir is  a young, charming, kindhearted musician who struggles to make it big as a singer because of his straightforwardness and anger issues. Ahaan meets Pankti and falls for her and Pankti eventually develops an attraction towards him too.

Pankti’s mother, Anita Sharma is a failed actress of her time and is almost completely bankrupt. Willing to do anything for money, she sells her daughter to a rich and cruel man named Jayant Dhanrajgir “JD”. JD is a married, manipulative, middle-aged man who uses the young and innocent Pankti for his pleasure with the intent of making her life a living hell.

Ahaan, who is revealed to be JD’s nephew, wants to save her from JD and help her realise and achieve her dream of becoming a successful singer. Disgusted with JD, Ahaan, after a long struggle, frees Pankti. Pankti’s elder sister, Poorva (Nidhi Shah), falls in love with her boss, Murali Shetty (Kiran Raj) “Monty” after Anita sells her to him. Monty is a good man and also falls in love with Poorva.

Eventually, the truth about JD is exposed to the entire family.JD’s wife, Sheetal (Himanshi Chaudhary), asks for a divorce but JD makes her sign over all her property to him. JD tries to kill Sheetal but she ends up in a coma. Pankti now pursues her singing career with Ahaan’s support. JD posts indecent photos of Pankti but Ahaan supports her and they run away to live a new life where no one knows them.

JD threatens to kill Poorva unless Anita files a complaint against Ahaan for abducting Pankti. Ahaan and Pankti are given shelter in a village but have to escape from JD again and go to the house of Uday Mathur (Rushal Parekh), Ahaan’s best friend and manager. Ahaan tries to clear Pankti’s name by lying about the photos being fake but Pankti appears on the talk show and clears her own name by telling the truth. Sheetal wakes up from the coma and shoots JD but unbeknownst to her, it is a fake bullet. Sheetal is arrested and JD is presumed dead.

JD returns under the persona of a man named Reyansh Diwan  and befriends Ahaan and Pankti organizing a concert in London where Ahaan is attacked by a hooded goon. Sheetal is released on bail and discovers Reyansh is actually JD. She tries to warn Ahaan and Pankti but JD blackmails her to stay silent and kidnaps her. Pankti and Ahaan argue and Reyansh makes matters worse by creating more misunderstandings between them. Pankti sets up a trap for Reyansh and decodes Sheetal’s last message as “JD is Reyansh”. Pankti and Uday defeat JD along with Sheetal’s son, Vikram (Buneet Kapoor), and free Ahaan and Sheetal. JD is arrested, and the family celebrate.

Ahaan and Pankti meet a famous singer named Rangoli Rai. In public, Rangoli pretends to be nice but behind closed doors she is obsessed with herself and her fame. Vikram becomes jealous of the attention Ahaan gets and instead of launching Ahaan as JMD’s new face, he launches Rangoli. Rangoli tries to get close to Ahaan. Pankti struggles as people in the music industry remind her of her past as a mistress and try to take advantage of her. Ahaan becomes friends with Rangoli.

Rangoli comes to sing the final recording of a song but can’t hit any notes right. The music director wants to replace her with Pankti angering Rangoli. Vikram does not want Pankti to sing as she is not a member of the JMD Company. Ahaan instead organises a concert for Pankti, but Rangoli has the concert cancelled. Ahaan, Pankti and Rangoli are scheduled to sing at a charity concert organized by KK. Fans praise Pankti’s voice over Rangoli’s and Vikram decides to sign Ahaan and Pankti for the benefit of his company. Rangoli plans to separate Ahaan and Pankti. Pankti discovers Rangoli’s intentions but Ahaan doesn’t believe her. Pankti gets upset, gathers evidence against Rangoli, and finally exposes her.

Ahaan and Pankti are set to be married on the same day as Monty and Poorva. Before Ahaan and Pankti can complete their vows, the police arrive and arrest Ahaan as Rangoli has accused him of rape. Ahaan is taken into custody while Rangoli tells Ahaan that she would take her complaint back if he marries her but he refuses. Ahaan’s trial begins and Rangoli hires Dinesh Khandelwal (Ashwin Kaushal), a cunning lawyer. Eventually, Ahaan’s mother, Aparna Dhanrajgir (Dolphin Dwivedi) becomes Ahaan’s lawyer and wins the court case in Ahaan’s favour.

Pankti and Ahaan overcome all their problems, and marry. The show ends with Ahaan and Pankti living happily with their family.

Love or Poison May 2021 teasers Glowtv

This is Love October 2019 teasers Glowtv