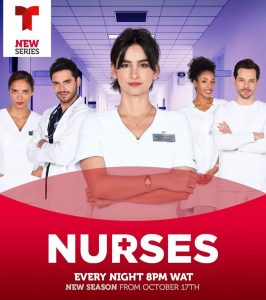 Nurses November 2022 teasers: Juliana struggles to cope with the sadness that has afflicted her pregnancy, and Helena offers her support. Sol ends her relationship with Fabio.

Paula arrives to visit Román. Victoria summons the nursing staff to a meeting, Román reaches a decision and Sol makes a confession to Fabio.

Bernard tells Álvaro about Felipe’s trip to New York to see his daughter. Bernard treats Iris, a businesswoman suffering from a brain tumour.

Paula and Román get married in María Clara’s apartment. Carlos tells his father he is expecting a daughter with Helena and will marry María Clara.

Iris is upset when Bernard tells her she must go back into surgery. Evelyn’s Alzheimer’s is becoming more apparent, but she wants to keep working.

On Garnica’s advice, María Clara asks Evelyn to tell the board about her condition. Robinson agrees to the impersonation, but Álvaro is suspicious.

Agustín tries to avoid staff cuts that would stress the interns and put patients at risk. Victoria wants Evelyn to return or resolve her work issues.

Determined to fight for her nurses, Evelyn asks to review everything that was approved in her absence, but she also has her own condition to battle.

Evelyn admits to Obando that she has Alzheimer’s and will be unable to continue at work. She asks that María Clara be considered for the position.

As preparation for a role, actor Sebastián Martínez pays a visit to the Santa Rosa hospital, and is shown around the facilities by Alvaro.

An explosion close to the hospital overwhelms the staff. Garnica and María Clara go to the emergency room to attend to the chaos.

The chaos continues. Concepción is rushed into surgery with peritonitis. Carlos feels uncomfortable about María Clara’s relationship with Garnica.

Performing Juliana’s ultrasound, Fabio diagnoses a syndrome that puts her babies’ lives at risk. Victoria has chest pains, and is treated by Helena.

Sol meets Fabio in his office and sees him trying to hide something. María Clara tells Carlos that she found a way to reintegrate their colleagues.

Juliana struggles to cope with the sadness that has afflicted her pregnancy, and Helena offers her support. Sol ends her relationship with Fabio.

María Clara sees the result of her pregnancy test. Paulina’s condition is diagnosed, and she’s angry when her mother refuses to accept it.

At Garnica’s office, Felicia’s lawyer announces that she intends to file a lawsuit against the hospital. Janeth receives her letter of dismissal.

Fabio admits to Héctor that he made a mistake in hiding Sol from his mother. Agustín complains about Victoria not telling him about her illness.

Soccer player Sebastián is admitted to hospital suffering from severe pains in his neck. Victoria is worried when she discovers a lump.

With the help of Héctor and Alberto, Sebastián manages to see his daughter via a video call. Andrés encourages his mother to win Garnica back.

On his way to the hospital, Álvaro discovers that Héctor has been involved in a road accident and administers first aid before the ambulance arrives.

Héctor is in surgery and Martha, the woman involved in his accident, is also in hospital. For one of these patients, events take a tragic turn.

Felicia is not satisfied with the amount of money offered by the hospital, and demands more. Andrés and Valentina discuss their future.

Events lead Álvaro to consider resuming his medical career. Victoria proposes Dr Helena as a candidate for the hospital’s new head of projects.

Beatriz can’t bear to hear from María Clara that she’s making a mistake by taking Simón away from his father. Álvaro makes efforts to help Jarvar.

Beatriz requires an emergency operation. Victoria confronts Felicia about her condition. Valentina feels unwell, and worries she might be pregnant.

Obando shows up in time to watch the fight between Agustín and Roberto. Valentina returns to look for Andrés, and reveals that she is pregnant.

Andrés complains to his mother about taking Roberto to hospital. It’s decided that Dr Matheus will take charge of the project proposed by Victoria.

Valentina confesses to Camilo about her pregnancy. Victoria wants Agustín to put an end to the protest, but he refuses to give.