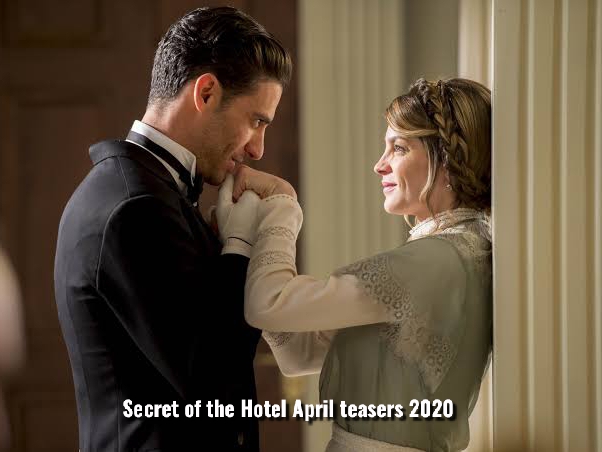 A young man of humble origins travels to the Gran Hotel on outskirts of the San Cristóbal Tlaxico village to visit his sister Cristina who works as the floor supervisor. There, Julio discovers that more than a month after being dismissed for allegedly stealing from the hotel, she has disappeared from everyone’s memory. He decides to stay on as a waiter to investigate her disappearance but does not expect the love, mystery, death and betrayal that follow.

Secrets at the hotel April teasers 2020:

Julio is suspicious of his sister’s disappearance. To start of his investigation, he pretends to be a new waiter at the hotel where her sister worked.

After a fight at a local bar, Isabel, the hotel owners daughter, looks for Julio’s name in the hotel registry book.

Julio finds Diego, the director of the hotel and Isabel’s fiancé, about to burn some clothes that are stained with blood. Julio realizes that these bloodied clothes are his sisters and takes them to his room. Diego and Isabel become suspicious of Julio’s reason for being at the hotel.

Julio explains to Isabel that he is really at the hotel to investigate why his sister Cristina had disappeared.

Following the death of a local prostitute, Violeta, Detective Ayala notices that there is a golden knife missing. The detective interrogates Andres, Julio and Belen.

Isabel follows the extortionist, falls and becomes unconscious, Julio finds her and explains that the police had interrogated him. Isabel tells Julio that the man who took the money works at the hotel and is blackmailing professor Ayala.

Police arrest Andrés. Julio is distressed and looks for Isabel. Felipe tells Isabel that he won’t do anything to help Andrés. Julio enters the room not aware that Garrido is there with a knife.

Teresa turns her son Felipe into the police and Andres is released. Diego is angry with Mr. Garrido because he could not recover the money. Pasucal accidently drops the money he got from the extortionist.

After Julio asks Pascual where his sister Cristina is, Diego kills Pascual. Isabel, Diego’s fiancé is speechless and she weeps.

Next month teasers on secrets of the hotel