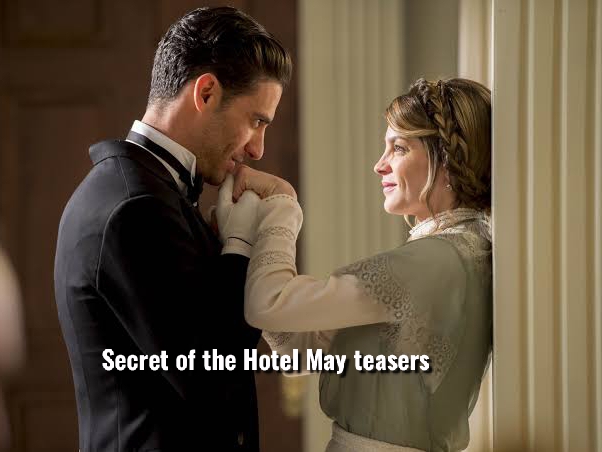 A young man of humble origins travels to the Gran Hotel on outskirts of the San Cristóbal Tlaxico village to visit his sister Cristina who works as the floor supervisor. There, Julio discovers that more than a month after being dismissed for allegedly stealing from the hotel, she has disappeared from everyone’s memory. He decides to stay on as a waiter to investigate her disappearance but does not expect the love, mystery, death and betrayal that follow.

Secrets at the hotel May teasers 2020.

Julio realizes that Pascual’s house is in ruins. When Julio asks Genaro, the bartender, if he knew Cristina, the man tells him that she was a promiscuous petty thief.  Julio fights with him and is shocked to have a gun pointed at him. Friday episode.

Julio boxes against the Irish man in return for Genaro telling him what he knows about Cristina, who apparently stole some objects from the hotel and sold them to him.

Julio is drunk and curses the day when he came to the Alarcóns’ Gran Hotel. Diego asks Belen, the chambermaid about her promotion and they kiss. Diego and Isabel are having dinner and she is surprised when she sees that Julio is the one that is serving the wine.

A boy tells Inspector Dagoberto that they found another murdered girl.  Detective Ayala goes to Cecilia Gaytán’s brothel to find out if someone knows Julio.

The detective proposes to Julio that he help him investigate inside the hotel. Julio believes that Diego knows why Cristina disappeared. Julio is going to see if a young lady that was murdered is his sister Cristina.

The woman that was murdered is not Cristina, Diego confesses to Isabel that Cristina was his lover. He says that the day Cristina vanished, he was with Isabel’s mother at the Party of Light.

Ayala learns through a telegram that there is another victim, things are getting more complicated. Belén tells Diego that Sofía ordered her to open his suite and that she saw her searching among his things.

Isabel tells Julio that the investigation will reopen. Diego tells Isabel he knows she was the one who accused him.

Diego wants to know who will testify against him.  Isabel tells Julio that she is not engaged to Diego anymore and they both kiss.

Detective Ayala tells Diego, who has since been accused of having murdered Cristina, that a witness will be coming the next day. Diego tells Mr. Garridoto to kill the witness.

Cristina makes Mr. Garrido faint when he tries to kill Julio. Isabel has followed Julio and they are both astonished when they see Cristina. The witness that Detective Ayala mentioned for Diegos trial does not show up.

Isabel refuses to believe that her mother Teresa was the one that ordered that Cristina should be murdered.  The detective tells Isabel and Julio that a long procedure will have to be carried out in order to release Diego.

Julio and Isabel kiss and Dr. Lázario Vicario sees them. Diego has been released from prison because it has been confirmed that Cristina is not dead.

Diego tries to seduce Belen, the chambermaid, violently and she turns him down. The Ballestros sisters make a bet to see if Felipe will cheat on Mercedes with Eugenia.

Teresa finds Cristina and asks her to give her the letter. All this happens while the general and Felipe are about to shoot one another.

General Ballesteros and Felipe Alarcón are about to fight a duel, but they run when they hear Mercedes screaming before she fell from the second floor and is unconscious.

Felipe tells Isabel that he is gong to see Detective Ayala because what happened to Mercedes was not an accident. Diego tells Teresa that Cristina has an accomplice at the hotel.

Sofia cries when her mother orders her to get naked in front of Elisa. Isabel says that she does not love Diego. Isabel and Julio say goodbye to each other and both have broken hearts.

Sofia is scared when she sees her mother carrying Cristinas body towards the ironing room.  Felipe stops Eugenia from killing Mercedes.

Isabel tells Matilde that she slept with Julio and she is planning on leaving with him.  Diego cries when he notices Isabel left him.

Teresa tells Isabel that she will protect her family no matter what. Isabel finds Julio in her bedroom and demands he tells her what he is doing there.

Secrets at the Hotel shows on FOX Life from Mondays to Fridays at 16h40. The repeat airs at 22h25.