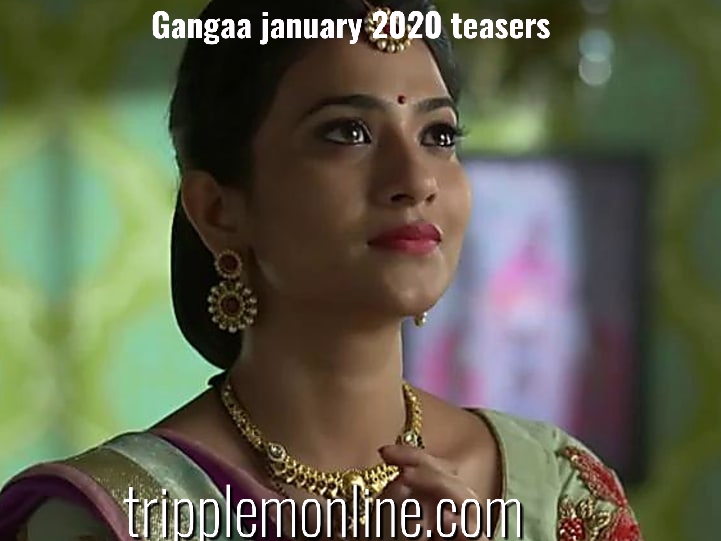 Gangaa January teasers 2020: Tragedy strikes and Gangaa looses her memory ready to be married to a new man Shiv. New enemies rise up against her once again!

While Niranjan and Madvhi are renewing their vows, Yash comes and has an agenda to ruin everything on this special day. But, will the plan work?

Madvhi gives Niranjan medicine from the false prophet that lead him to the hospital. The false prophet is at the Chaturvedi mansion and has gathered all of them to blame Krishna for the bad things happening at the mansion. Camera’s are secrely installed.

Seeing that the false prophet placed camera’s around the Chaturvedi it has become so easy for her to lie to Kanta and Madvhi. Madvi kicks Gangaa and Sagar out of the house because they the only two that don’t believe in the false prophet.

Gangaa is convinced the false prophet is up to no good, she opens up to Sagar but he is supporting his mother in this situation. The only thing that Gangaa believes can save Niranjan is the bone marrow test but the false prophet paid a lab assistant to change the results.

Krishna is a match, but this upsets Yash and Prabha leading to the kidnapping of Krishna. Kanta and Madvhi start believing Gangaa and now they are all fighting to find Krishna and find the camera’s that were hidden in the house. Abha reveals the truth about who sent her.

The transplant was successful but Niranjan has visitors that plan to kill him, Krishna is in the same room and watches as Yash takes her grandfather’s life.

Kanta has a heart attack because of the stress she has been feeling lately, her granddaughter is being kidnapped and her son is fighting for his life. Sagar and Gangaa work together in finding their daughter.

Prabha has kidnapped the Charturvedi family at this time off bereavement. She plans to kill all of them by using each family member to kill each other according to game she has them playing. Just as Gangaa is about to shoot Sagar and unexpected family member shoots first aiming at Prabha.

Niranjan is alive and just when they all thought the family is back together, Sagar and Gangaa are still deceiving each other about how they feel. He is going back to London because he is waiting on Gangaa to confess her love for him. Will Sagar leave or stay?

Kashish lied about being pregnant in order not to lose Purab, but when the truth comes out she loses both Purab and Gangaa.

Gangaa is acting really strange, everything has gone back to normal except her thoughts. This scares Kanta and Sagar.

Gangaa has a premonition of the future but no-one seems to believe anything she tells them. The whole family goes down to the river and Gangaa meets Maharaj’s daughter who is getting married called Gangaa.

There’s bad thunder at the river and Gangaa, Sagar and Krishna drown. Gangaa makes it out but loses her memory and her journey takes a whole new twist.

Gangaa is suffering from amnesia, she finds herself in a new home with new family members.

Gangaa marries a respectable man called Shiv, he has a daughter who tries everything in her power to make Gangaa leave their home.

There is no connection between Shiv and Gangaa, but because they are used to arranged marriages none of them seem to realise that they have the wrong Gangaa in their house. Gangaa can’t remember her life before this chapter of her life.

Jumki and Radica team up to make Shiv hate Gangaa and make her leave, while Shiv’s step mother and brother a plotting on taking his inheritance that his dad left him.

Gangaa follows the boy who the community thought Shiv had killed, to prove Shiv’s innocence.

Gangaa is getting along with Shiv, but this relationship has Radica very unhappy. Jumki continues with her plots to destroy Gangaa.

Jumki brainwashes Radica with false information about Gangaa, while Gangaa is getting close to the other family members.

Shiv is ready to take over from her dad, but this makes his brother jealous. Gangaa has surprise visitor, but they can’t see each other because she must cover her face.

Gangaa wins Radica’s heart when she attends one of her school meetings, this gives Shiv surety that they will be a happy family, but the rest of Shiv’s family is very disappointed.

Nanny tells Gangaa some of the family secrets, she now knows that Shiv is in danger as his family is against him. She asks Nanny for help to save Shiv.

Thugs, hired by Pratab come into the house and kidnap Radica. Pratab and his mother are disappointed once again that Gangaa will save the day.

Jumki continues plotting against Gangaa, but Shiv is standing by his wife.

Gangaa is given wife duties by her mother in law and the priest, Jumki is sabotaging Gangaa in most of her tasks. At the end of the prayer the priest thanks Gangaa for all her hard work.

While getting some water, Gangaa falls into a huge hole, Shiv travels to go save her but he gets bitten by a snake.

Ashi’s future inlaws have arrived to meet her, but she ran away with the love of her life. Jumki blames Gangaa for Ashi’s decision, but Gangaa goes looking for Ashi who is in danger.

Gangaa is regaining her memory, but still not sure what’s going on. Jumki continues acting pregnant to be taken seriously. Sagar is in town looking for his wife.

It’s holy, and the whole family is in a great spirit. Shiv takes Saga in to heal his wounds from the accident.

Sagar can’t recognise Gangaa because of her covered face, but they both seem to act restless around each other. Pratab’s mistress comes and introduces herself to his family.

👉 👉 Next month teasers on gangaa