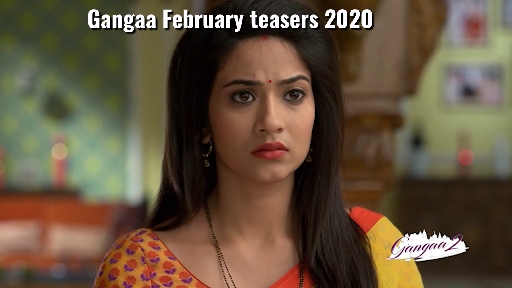 Sagar continues looking for Gangaa until another tragedy occurs and he too loses his life. Gangaa February teasers 2020 on Zee World.

Jumki is distraught when she finds out her husband has been cheating on her, but Jumki blames Gangaa for bringing the girl in their house.

Sagar explains to Shiv why he’s in town, he gives Shiv a picture of his family that he is looking for.

Sagar hears the voice of gangaa everywhere and keeps having visions of her. He is convinced that his wife is nearby. Meanwhile gangaa continues to prove her worth in the Jhaa household creating more enemies for herself.

Jhumki ties a knot in the way for Ganga. Sagar had come into the temple. Ganga slips to fell into his arms but her hair covers her face. Savitra is angry with Sagar but he defends himself and gangaa. Later sagar gives Shiv a photo of his family, he promises to help Sagar find them.

Shiv and his brother continue to fight over the property and Sagar offers to help them as a lawyer. Later Shiv boasts about Ganga’s kheer. Sagar tastes it then recognizes it as Ganga’s. Ganga is disturbed by Sagar’s words. She shares her confusion and flashes from past with Shiv.

Ganga leaves some bangles at a shop for being expensive. Sagar watches Shiv buy them. He was crossing the road when a car hits Shiv but he anyway saves the bangles. Sagar says he could have bought some other bangles, but Shiv says Ganga liked them. Shiv tells sagar he has started to love Ganga.

Shiv misplaces the photo sagar gave him. Sagar is unhappy. Unknown to them the envelope has fallen into the wrong hands. Meanwhile gangaa wins parvati heart making Shiv grow even fonder love for her. Also Riya comes to Savitri and tells her that Jhumki isn’t pregnant.

During a fast ritual for husbands, Jhumki comes to Savitri and whispers Shiv won’t come so soon, and was sure this fast will suffocate Ganga’s love story and life both. But Shiv arrive just in time along with Sagar. Sagar is tearful as he watches them exchange their token of love.

Muneem ji says they have found a dead body in Ganga River, it’s distorted but the dress is as Sagar described. Sagar goes to clutch Muneem’s collar shouting how dare he called Ganga as dead, later sagar confirms that the body is not his ganga..

Meanwhile Pratab and Savitri discover the truth: Pratab tells Savitri they have found Sagar’s wife. He says Shiv and Sagar’s Ganga is the same? Savitri was taken aback. Pratab says they must now see who wins Ganga, Shiv or Sagar? The day Sagar discovers Shiv’s Ganga is his; he would drop Shiv’s case and leave. They will take villager’s confidence saying Shiv has kept someone else’s wife as his. Savitri also cheers their problem has been solved. Savitri plans a huge drama about it.

Sarita and pratab hold a pooja to pray for Sagar’s wife as part of their plan to reveal Gangaa’s true identity. They enlarge Gangaa’s photo, the whole family is shocked to see the similarities. Shiv refuse to believe that Gangaa is not his wife.

Shiv tries to shoot Sagar but gangaa comes in between them and her veil falls off. Sagar drags Ganga’s hand to take her along, but Ganga removes his hand. She asks how he dare touch her, she doesn’t recognize him at all. She isn’t his Ganga, she is Shiv’s wife. She didn’t come to save his life, she wants to save her husband because he must be accused for his murder. Later, in desperation Sagar drinks poisoned milk to protest the loss of his wife.

The next day, Sagar tries to kidnap Gangaa and run away with her but the villagers stop him. In a turn on event, Shiv gives gangaa over to Sagar as his lawfully wedded wife. A man throws a stone that hits Shiv’s head instead of Sagar. Shiv stops Ganga from moving towards him and tells her she is Sagar’s wife. Ganga is shocked. Shiv hands her and Sagar’s photos. Shiv was broken.

Gangaa is reluctant to leave Shiv as she doesn’t remember Sagar. Shiv begs her to go with him. Later gangaa has premonition again and the next day Sagar and Ganga are attacked by some robbers. Ganga is hit on her head. Sagar comes to Shiv to save him and gets a bullet shot on his chest.

In the hospital, Ganga says if Ganga is there nothing would happen to Sagar. Madhvi and Shiv are with Sagar as he breathes his last. The doctor announces Sagar is no more. Before dying Sagar begs Shiv to take gangaa as his wife since he doesn’t want her to live her life as a widow again. Will Shiv family accept gangaa Now?

Gangaa full story for all seasons

More teasers to be added…