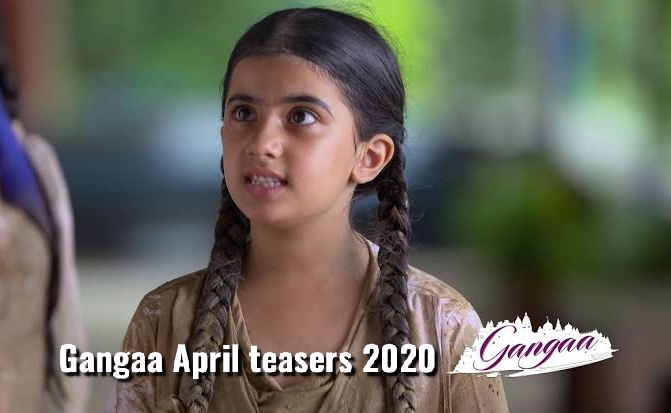 Gangaa April teasers 2020: focuses on a little girl who only loves two things in life, her papa and her self-respect. She gets married off at a tender age, unfortunately a tragic event occurs that causes her to lose her papa and her husband on the same day.

Gangaa is a Story about a little girl who only loves two things in life, her papa and her self-respect. She gets married off at a tender age, unfortunately a tragic event occurs that causes her to lose her papa and her husband on the same day.

Sudha tries to forcefully cut off Gangaa’s hair. Niranjan saves Gangaa from Sudha and the other widows, soon after he makes a bold decision. We get introduced to Niranjan’s family and now his mother starts to question who Gangaa is.

Amma puts Niranjan in a very difficult position as he has to choose between her and Gangaa. Gangaa realises that in order for her to gain entry into Niranjan’s house, she will have to befriend his son, Sagar.

In the early parts of the morning, Gangaa disappears and everyone is looking for her. Mairi steals jewellery from Madhvi and blames Gangaa. Niranjan finds her looking for her father just to perform his last rights.

Gangaa realises that she will have to keep Sagar happy in order for her to continue staying there. Sagar asks Gangaa to be by his school at 12 pm sharp, only problem is Gangaa is trapped inside the house. How will she get out?

The vendor sees the cloth rope hanging from the terrace and decides to climb up. Gangaa gets shouted at by Niranjan and he stops talking to her. Prabha takes advantage of the situation as she manipulates Gangaa into doing all the chores.

Niranjan buys shoes for Gangaa. Prabha tries her best to get rid of Gangaa and she asks Amma to help. Gangaa and Sagar become very close as Gangaa stands up for him. Niranjan makes a very tough and heart breaking decision.

Prabha’s plan comes to fruition as Gangaa leaves with Rashmi and her husband. Turns out that Rashmi had her own hidden agenda why she wanted to adopt Gangaa so soon. Gangaa calls to speak with Sagar, but he refuses to hear her out.

Gangaa leaves home just to help Sagar in the nick of time to win the kite flying competition. Rashmi, Amma and Prabha’s plan for Gangaa is on the verge of being ruined as Gangaa tells Niranjan about her new baby sister.

Niranjan finds out that Rashmi indeed does have a daughter and as a result he takes Gangaa away. Yash decides to teach Gangaa a lesson. What could he possible have planned?

Amma takes it upon herself to teach Gangaa the rules and regulations of being a widow. Madhvi asks Niranjan to organise a promotion for Ratan, but he refuses. Sagar calls Gangaa in the early hours of the morning just to give her food.

Sagar and Gangaa work together to fool Maharaj and Amma. Gangaa saves Amma from an attacking dog. Gangaa is stuck between telling the truth and lying. Which will she choose?

Niranjan refuses to believe that Gangaa stole the food. Madhvi and Gangaa appear to be getting closer. Gangaa chooses to still go through with the fast. Is this a disaster waiting to happen?

Gangaa now has to deal with  all of the obstacles Sudha puts in her way. Sagar tries his best to make her break her fast, but Gangaa shows how stubborn and determined she really is to finish.

Gangaa with the help of Pulkit and Sagar takes back the Saree and jewellery from Sudha, unfortunately Amma finds out about it. Amma tries to explain the life of a widow to Gangaa, but Gangaa refuses to accept what is said.

Sagar and Gangaa write a letter to God with the hopes that it would end the misunderstanding at home. Amma and Niranjan both come to agreement to let Gangaa study futher but, only on one condition. What could the condition be?

Jhanvi does something to Gangaa’s clothes that makes her break out with a rash and pass out. Sagar comes to Gangaa’s rescue.

Gangaa, Pulkit and Sagar join hands to try and get rid of Gangaa’s teacher. Sudha and Prabha try there best to instigate Amma against Gangaa. Gangaa fakes having stomach pain just to skip the lesson.

Amma realises that because of Gangaa, she loosing a lot of respect from the other widows. Niranjan shouts at Pulkit for neglecting his studies. Sagar hands Gangaa a cd player with work Gangaa needs to memorise.

Amma continues to make the rift between Gangaa and Niranjan wider and to make matters worse, she fools Gangaa into taking a vow of silence. Sagar begins to question the sudden closeness between Amma and Gangaa.

Gangaa somehow tells Sagar about the oath she took not to talk. Madhvi out of the blue gets a severe back pain and she asks Gangaa to call someone, only problem is Gangaa can’t talk. How will Gangaa get help?

Niranjan’s brother in law, Omkar comes to visit along with his daughter Drishti. Gangaa thinks about what Amma says and unknowingly she insults Omkar.

Sagar finds a way to free Gangaa so she can expose Amma’s deeds to Niranjan. Niranjan finds out that Amma instructed the teacher to teach Gangaa the wrong stuff.

Drishti becomes the to performing student in the state. Omkar crushes all of Drishti’s dreams as he fixes her marriage already. Upon meeting the potential groom, Gangaa and Sagar decide to evaluate him all on their own.

Gangaa tells Akshay the full truth of Drishti after Drishti runs out the room. Omkar tells Amma that he plans to create differences between Sagar and Gangaa. What could he possibly be planning to do?

Drishti and Pulkit come across a photo of Akshay with another girl on social media. Sagar starts to give Gangaa a cold shoulder. Drishti accidentally tells Madhvi that her mother was abused.

Drishti tells Madhvi the truth behind her mother’s death and it seems like Omkar has a lot of skeletons in his closet. Omkar tries to threaten Gangaa after she exposes him, but she isn’t backing down.

Sagar deeply hurts Gangaa by not acknowledging her on stage. Pulkit gives Niranjan a fake report card his friends created. Gangaa realises the importance of education and she tries to convince Niranjan, but he refuses to believe her.

Niranjan decides to test Gangaa to see how serious she is about studying. Gangaa finds Pulkit’s original report car and before she can hand it to him, Niranjan intercepts.