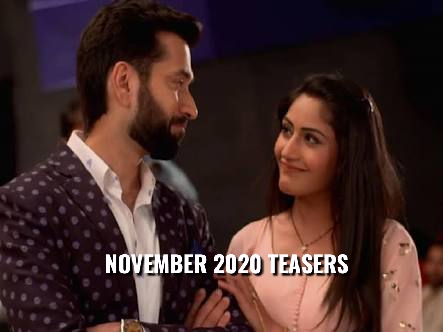 Game Of Love November Teasers 2020: Shivaay proposes to Anika and they share a romantic moment. Later, Om reveals something shocking about Gauri, while the Oberois play truth or dare.

Anika confirms that Shivaay is pretending and decides to find the reason behind his act. Omkara doubts Gauri of having an affair!

Gauri expresses her feelings to Om in English and later, breaks up with him. Shivaay tells Anika the reason behind his act with Tanya. What is it?

Shivaay gives Anika a romantic surprise on karva chauth. Tanya waits for someone’s arrival. Who is it?

Abhay reveals to Tanya that he is also an Oberoi. Anika follows Tej and Shakti when they secretly take a man inside the house. Who is it?

Shukla recognises Abhay and decides to tell Tej that he took the tapes from him. Bhavya decides to quit her job when Rudra humiliates her!

Shivaay becomes suspicious when he overhears his family talk and decides to follow them to Goa. Abhay rejoices as his evil plans are working!

The Oberois, Tanya and Sundari follow each other and reach the airport. Tej and company mislead Shivaay and go to meet Shukla.

Shivaay recognises Anika, who is in disguise. A man points a gun at the passengers in the flight.

Anika and Bhavya disarm the perpetrator who pointed a gun at the passengers on-board. Ajay puts Gauri in a terrible position.

Shivaay demands the truth about Kalyani Mills from his family members and meets Shukla to get more clarity. Will Shukla tell him the truth?

Anika and Bhavya get nostaligic as they celebrate Diwali. Shivaay eavesdrops on their conversation and gives Anika a surprise!

Shivaay proposes to Anika and they share a romantic moment. Later, Om reveals something shocking about Gauri, while the Oberois play truth or dare.

Omkara expresses his love for Gauri and asks her to come back. Will Gauri return?

Omkara informs everyone about Gauri’s decision. While everyone tries to pacify him, Anika wonders if Shivaay will continue to like her in their old age!

Shivaay learns that Gauri was adopted! Anika dreams about her lost sister, Chutki. What’s the mystery?

Ajay learns about Gauri’s ritual and threatens her that he will stop Mukesh and Richa’s wedding. ShiOmRu are left feeling guilty. Why?

Shivaay consoles Anika and apologises for his behaviour. Gauri tells Om that she has to marry Ajay for Richa’s sake.

Anika and Bhavya smell something fishy and check Om’s room but Shivaay diverts them. Anika goes to Om’s room, searching for her phone. Will she learn about Gauri?

Omkara and Shivaay make special arrangements to spend some quality time with Anika and Gauri respectively. Later, Anika learns about a trust test and decides to test Shivaay.

Rudra convinces Omkara and Shivaay to accompany him to Goa. Pinky’s cousin Dinki visits the Oberois for a few days. What happens next?

On the way to Goa, ShiOmRu give a lift to Piya who drugs them! Later, Ajay is off to Unnao searching for the man in the video and Svetlana joins him.

ShiOmRu return home when Bhavya smells something fishy. Later, the Oberoi brothers get a video message leaving them dumbstruck.

ShiOmRu decide to ask Piya the truth, but end up admiring her dance. Soon they are joined by Anika, Gauri and Bhavya too!

After being threatened by Piya, ShiOmRu plan to destroy the video at midnight. Will they succeed before it’s too late?

Shivaay and Om try telling the truth to Anika and Gauri. Rudra ends up arguing with Bhavya when he tells her the truth. Piya is impressed at their honesty but will she spare them?

The Oberois celebrate Dadi’s birthday when Dinki brings Piya’s pen drive and plans to exchange it with Anika’s. Piya suspects some foul play. What will she do now?

Before the Oberoi brothers could stop Dinki, she plays the video, shocking everyone. How will the Oberois react to it?

Anika asks Shivaay to get something khatta for her! Are the Oberois in for some good news?

Shivaay breaks the news about Anika’s pregnancy to the family and later decides to take their relation to the next level!

Anika tells Shivaay that she has a surprise for him when they find themselves alone in the mansion. Abhay and Svetlana are in search of a tape.

Shivaay and Anika get intimate when they are alone in the mansion. Abhay accuses the Oberois of purposefully burning Kalyani Mills. How will they react?

ShiOmRu throw Abhay out of the house while Dadi wants to bring him back to the mansion and give him his rights!

Tej and Shakti confront Shivaay for bringing Abhay home, but Dadi tells them that he did so on her insistence. The Oberois are shocked when Abhay introduces his wife. But why?

Shivaay allows Svetlana to stay in the Oberoi mansion when she blackmails him. A furious Anika questions Shivaay over this decision. Will he reveal the reason?

Anika, Gauri, Bhavya and Rudra plan to spoil Svetlana’s makeup to ruin her press meet. But their plan backfires, putting Anika in a tight spot!

Shivaay exposes Svetlana when the press demands justice. Shivaay and Om watch a footage of an explosion in the Oberoi Mansion while Rudra reveals something shocking!

Anika, Shivaay and Om save Rudra from Svetlana’s trap. Bhavya and Rudra part ways. Why?

The family is shattered when Shivaay announces that he has transferred fifty percent shares of the Oberoi Group to Svetlana’s name. Why?

Shivaay pacifies Tej by promising to fix the situation. Svetlana and Tia team up with their third sister against the Oberoi brothers. Tia manages to enter the Oberoi Mansion!

Anika asks Shivaay the reason for giving away Om and Rudra’s property shares! Elsewhere, Tej and Pinky have a heated argument.

Shivaay calls a press conference and stuns everyone by announcing that Svetlana will be his new business partner.

Tej and Pinky argue and the situation gets worse. Jahnvi blames Shivaay for it and asks him to leave the house!

Anika decides to leave the house with Shivaay. Later, Tej wants to search Shivaay and Anika’s luggage before they leave, leaving the Oberois shocked.

Rudra tries to stop Shivika from leaving by threatening to shoot himself. Later, Shivika leave the Oberoi Mansion.

Next: December on game of Love