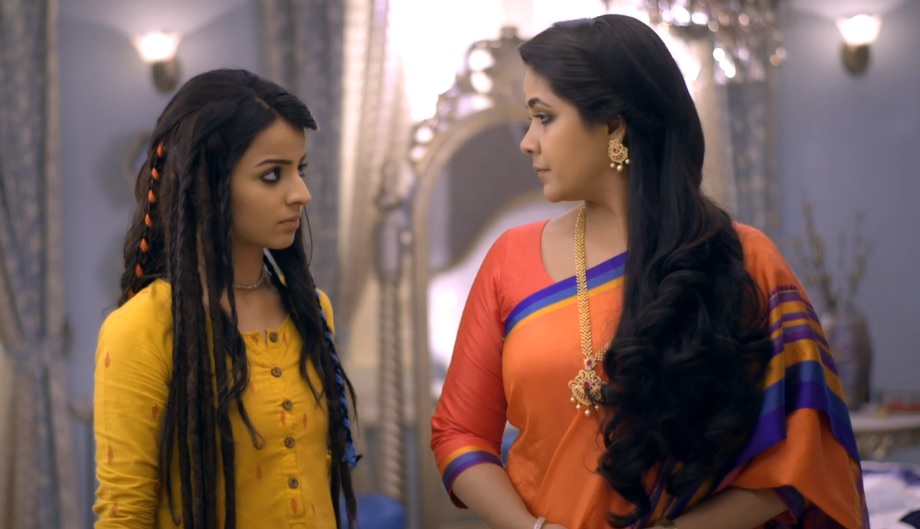 Family Secrets July teasers 2021: In the royal residence of Lal Mahal, two infants are born. The girl baby is secretly handed over to a Pandit. The Pandit takes care of his adopted daughter, Nami..

Anami scolds Ladoo for disrespecting his elders. Ladoo tries to hide from Anami and eavesdrops on Sudha’s treacherous plan. Will he tell Anami about it?

Did Ladoo just get kidnapped in Anami’s presence? Satrupa helps Anami find him. Where is he?

Anami goes into depression, thinking about Ladoo. Adhiraj and his team conduct a search. Can they find Ladoo?

Adhiraj consoles Anami as she worries about Ladoo. Later, she receives a parcel from the kidnapper. What’s in it?

Satrupa takes care of Anami and soon leaves the Mahal as she gets to know about Ladoo. What is Satrupa up to?

Satrupa makes an irresistible offer to Purushottam to release Ladoo. Will he accept the offer?

Purushottam ends up in Satrupa’s trap as she frees Ladoo from his grasp. Later, Satrupa fears reuniting Anami and Ladoo!

Satrupa refrains from taking Ladoo home. Instead, she comes back home alone and cooks up a different story. What is Satrupa up to?

Satrupa comforts Anami, but doesn’t disclose that she has taken Ladoo away!

Anami saves Satrupa when Sudha attacks her. Later, Anami finds Ladoo’s drawing in Satrupa’s purse. Will she find out the truth?

Purushottam attacks Satrupa and holds her and Ladoo at gunpoint. Anami and Adhiraj try to rescue Ladoo.

Purushottam asks Ladoo to reveal his abductor’s name. Later, Sudha does something unthinkable when he tries to reveal her secret!

Anami and Satrupa are disturbed as Ladoo loses his voice. Meanwhile, Sudha tries to scare Ladoo!

Sudha threatens to kill Anami if Ladoo speaks a word against her. Anami suspects that Ladoo’s kidnapper resides in Lal Mahal and makes a smart plan to find the culprit!

Anami with the help of Adhiraj scripts her own kidnapping drama to make Ladoo speak. Can their plan bring Ladoo’s voice back?

Anami and the others are happy as Ladoo gets his voice back. But Sudha decides to shut him down before he exposes her!

Sudha fails in her plan to harm Ladoo. Satrupa fears that Ladoo might reveal her secret to Anami.

Anami lashes out at Satrupa. Later, she decides to leave the Lal Mahal.

Anami is determined to escape from Lal Mahal with the singing troupe. Meanwhile, Vikramaditya consults Adhiraj for Anami’s security.

Adhiraj is sad on learning about Anami’s plan to leave Lal Mahal. With Poonam and Narottam’s help, Anami and Ladoo manage to escape.

Adhiraj intervenes when Anami tries to escape along with Ladoo. Later, Satrupa gets shocked to find them missing.

Anami tells Murari and Madhu that they are in danger. On Murari’s advice, Anami, Adhiraj and Ladoo travel to Haripur.

Satrupa tries to catch Anami. On their way to Haripur, Anami, Adhiraj and Ladoo struggle to hide from the police.

Adhiraj, Anami and Ladoo struggle to escape from the police. Satrupa is furious to know that Adhiraj is helping Anami in her plan.

Adhiraj safely brings Anami and Ladoo back to Madhu and Murari. Anami tries to go far from Satrupa’s reach with her family.

Anami is shocked to see her house burning. Meanwhile, Adhiraj catches the culprit behind the fire. Will he find out who had sent him?

Anami vows to take revenge against Satrupa for destroying her house. Meanwhile, Satrupa and the others are in shock on learning about the incident.

Adhiraj decides to return home, leaving Anami depressed. Satrupa shouts at Sudha as she believes that Anami is dead.

Anami wishes to go back to Lal Mahal to avenge Satrupa. Elsewhere, Satrupa does the Mannat Puja to bring Anami back.

Anami lies to Satrupa that Madhu and Murari died in the accident. Satrupa vows to win Anami’s heart.

Anami is shocked to see the preparations for Madhu and Murari’s post-death rituals. Sudha doubts Anami of hiding something.

Anami talks to Adhiraj and unknowingly expresses her feelings to him. Later, Sudha plans to test Anami and tells her that Ladoo should shave his head to finish the rituals.

Adhiraj and Anami get ready to meet each other. Later, Anami’s decision to work for Royal Steels shocks Satrupa.

Dhiru gets Adhiraj released on bail and tells Satrupa’s family about her misdeeds. Later, Anami tells them that Adhiraj is innocent.

Satrupa goes against her father for supporting Dhiru. Soon, she finds out about Sudha’s visit to her room and does the unthinkable!

Dhiru warns Adhiraj against Anami. Satrupa is taken aback when Anami accuses her of kidnapping Ladoo and tells her the reason why she had left.

After an ugly confrontation with Satrupa, Vikramaditya decides to punish her. Adhiraj and Anami have a romantic chat and he gives her a sweet surprise.

Ladoo stops Anami from getting Satrupa arrested. Later, Anami, Poonam and Ladoo decide to bake a cake for Adhiraj.

Damo informs Satrupa that she didn’t find the recording. Anami ponders over Dhiru’s words and decides to stay away from Adhiraj.

Anami decides to maintain distance from Adhiraj, but he refuses to follow this and expresses his love for her. How will Anami react?

Anami ponders over Adhiraj’s proposal. Gayatri advises her not to make a hasty decision. Will she say the magical words to Adhiraj?

Adhiraj is sad as Anami refuses to accept his love. Later, Anami tells him that she needs some time to think. Will she accept his proposal?

Satrupa tries to convince Anami to celebrate her birthday. Anami and Madhu rejoice when they talk to each other after a long time.

Madhu secretly enters the Lal Mahal to meet Anami on her birthday. Later, Satrupa and Gayatri give Anami suggestions for her birthday attire.

Dhiru doesn’t allow Adhiraj to attend Anami’s birthday. Anami impresses everyone with her special look and speech at the party, while Kamini and Avdhoot plan to trouble her.

The media reporters scare Anami, asking her personal questions. Anami embraces Adhiraj and expresses her feelings for him.

Avdhoot plays an audio recording of Satrupa’s phone call during Anami’s birthday celebration. Anami reaches a conclusion that Satrupa was the one who set the house on fire. Is she right?

Sudha is overjoyed as Satrupa is blamed. During the interrogation, Sher Singh reveals to Adhiraj that Satrupa is innocent. Then who is the culprit?

Adhiraj tells Anami and Gayatri about Sher Singh’s statement, leaving them stunned. Satrupa and Anami embrace each other, while a shock awaits Sudha.

Adhiraj arrests Sudha after Narottam proves her guilty. Later, Baldev and Narottam reconcile, while Anami decides to tell Satrupa about her parents.

Baldev and Satrupa reconcile. Narottam reveals the secret behind Vatsalya’s death, while Anami tries to stop him from leaving the Lal Mahal.

Baldev makes peace with Narottam and Dhiru. Anami tells Satrupa that Murari and Madhu are alive. Later, everyone is taken aback by Vatsalya’s arrival.