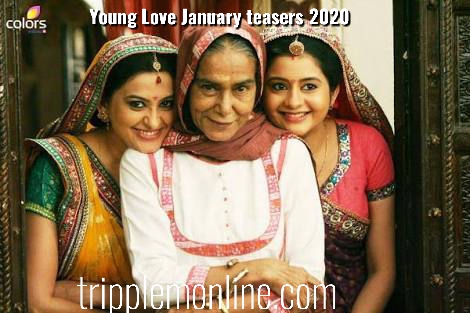 Good news as The doctor informs Shiv and Anandi that they are going to be parents of twins! Also, tension builds as Gehna’s marriage rituals begin. Young love January teasers 2020

Thursday 2 January 2019
Daddu insists that he is not going to attend the wedding in Jaitsar. Will Anandi and Amol be able to change his mind?

Grandma Kalyani is horrified upon seeing her English results. What will she do now that she has failed?

Friday 3 January 2019
Grandma Kalyani tricks Jagdish into signing her English paper. Will she deceive him or confess to failing?

Gehna finds herself in a dilemma as she is still not ready to marry Niranjan.

Tension builds as Gehna’s marriage rituals begin. Will she go through with the marriage?

Sona is shocked to see the man who chased her through the market. Will she manage to escape him again?

Tuesday 7 January 2019
Alok and Meenu are shocked to see Saanchi and to hear about what has been going on between Saanchi and Vivek.

The Jaitsar man are furious about Gehna’s wedding and decide that nobody will attend the wedding. Will the women listen to them or will they still attend?

Wednesday 8 January 2019
Anger builds up in Nandu as he listens to Gopal’s taunts. Will he create a scene at the wedding?

Ira and Meenu plot and plan in order to ease the tension between their husbands. Will Subhadra cause more drama?

Thursday 9 January 2019
Nandu tells Gehna that Niranjan is not a good man and that he does not want her to marry him. How will she react?

Subhadra seizes the opportunity to instigate Meenu against Alok.

Friday 10 January 2019
Subhadra stirs up more and more trouble between Ira and Meenu. Will Saanchi notice?

Anandi hears Jyoti screaming and pleading with Mandira to free her. Will the police get there in time?

Monday 13 January 2019
Nandu takes his anger out on Niranjan.
Niranjan tries to win Nandu over. Will Nandu let go of his anger?

Tuesday 14 January 2019
Grandma Kalyani is shocked to know that Jagdish helped Sona even after knowing her truth.
Anandi worries as everyone in the house is disturbed and unhappy.

Wednesday 15 January 2019
Reporters visit Jagdish’s house in order to find out the truth about Sona.

Alok tries his utmost to help Amol ride a bicycle. Will he get it right?

Thursday 16 January 2019
Alok and Anoop are at loggerheads, after which Anoop decides to pack and leave home.
Anandi is shocked to hear Shiv tell her about the condition that Anoop has given him. What will Shiv do?

Friday 17 January 2019
Daddu has a heart attack. Will he be okay?
Suman is happy to know that Vivek can come home in a few days.

Monday 20 January 2019
Suman finds Saanchi’s pregnancy reports. How will she react?
Saanchi is rushed to the hospital. Will she be okay?

Tuesday 21 January 2019
Vivek apologises to Saanchi and tries to console her for their loss. Will she forgive him? Reporters question LPS about Kusum. Will Kusum expose his lies?

Wednesday 22 January 2019
Subhadra deliberately ill-treats Amol. Is there any way that someone like Subhadra could ever mend her evil ways?
Nandu becomes more and more possessive of Gehna. Will he ever accept Niranjan?

Thursday 23 January 2019
Jagdish informs Kusum that the DNA test has been done. What will the results reveal?
Shrivastav tries to bribe Kusum to take back the statements she made to the media and offers her a blank cheque. What will she do?

Friday 24 January 2019
Shrivastav offers to bribe the lab doctors in order to get the DNA results changed. Will he succeed?
Subhadra taunts Khazaan. Will he keep silent about it or tell Anandi?

Monday 27 January 2019
Gehna is trapped in a fire and Niranjan goes in to save her. Will they be okay?
Everyone is happy and excited to hear about Anandi’s pregnancy.

Tuesday 28 January 2019
Anandi tells Grandma Kalyani that she is pregnant. How will Grandma react?
LP’s DNA report is out and his truth is finally exposed in front of everyone.

Wednesday 29 January 2019
Anandi suspects that Subhadra is the one who mixed spices into Khazaan’s food. Will Subhadra confess?
Saanchi decides to stop working and be a housewife, however Vivek encourages her to go back to work. Has he really changed?

Thursday 30 January 2019
The doctor informs Shiv and Anandi that they are going to be parents of twins! How will they react? Alok and Anoop play cricket together happily. How will Subhadra react?

Friday 31 January 2019
Gehna and Niranjan spend some romantic time together.
Subhadra eavesdrops on the conversation between Khazaan and Grandma Kalyani. What is he up to now?

A love to die for Glow Tv November 2021 teasers