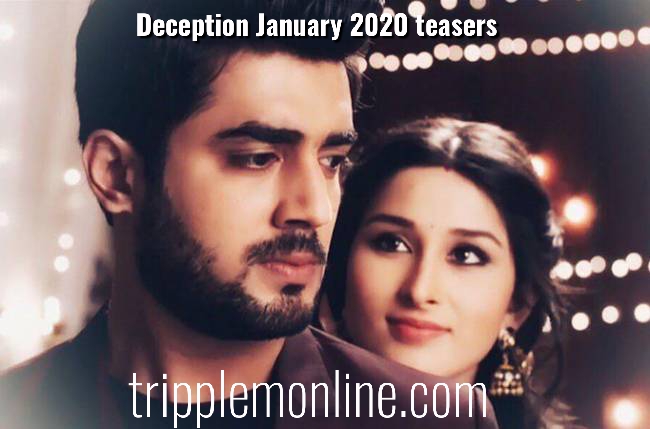 Monday 6 January 2019
Episode 1
Deception is a modern-day interpretation of the classic love story, Naren is a young man trying to figure out life with no attachments or indulgence.

He stays with his mom and dad who are very worried about their son’s new life journey. They see Pooja at a school concert and start to question if she could be the correct person to help them with Naren.

Tuesday 7 January 2019
Episode 2
Pooja’s uncle’s house is getting repossessed and her aunt is blaming Pooja. She could save her home by agreeing to Naren’s dad’s offer of 1 million cash.

Wednesday 8 January 2019
Episode 3
Harish deposits 1 million in the House agents account in order to have Pooja agree with helping them with Naren. She’s still not convinced and refuses to accept the money.

Thursday 9 January 2019
Episode 4
Pooja finally agrees to help with Naren, but she already has an enemy, Neelima is Naren’s aunt and hates the fact that she is being lied to about why Pooja is working in the house.

Friday 10 January 2019
Episode 5
Naren hates the fact that his parents are not listening to his requests about letting go of Pooja. He’s not the only one who hates her, Rahul is another one who hates Pooja’s presence.

Saturday 11 January 2019
Episode 6
It’s Naren’s birthday and his cousins are celebrating with him and Pooja at the farmhouse. It’s raining cats and dogs and the lights go off. While Pooja goes to check the electricity box, she gets attacked by one of the cousins, but manges to escape.

Sunday 12 January 2019
Episode 7
Pooja suspects it was Naren who tried to attack her at the Farmhouse. She tells Harish and he and the rest of the family leave for a function leaving Naren and Pooja behind so that Pooja can prove her statement.

Monday 13 January 2019
Episode 8
Naren makes the ultimate sacrifice and let’s go of all worldly things to find the answers. His dad is furious but hopes Pooja will get him home. Rahul and his mother Neelima are excited and are on a mission to get rid of Pooja.

Tuesday 14 January 2019
Episode 9
Neelima and Supriya think if Naren could get married he will be his old self again, but his father only wants his son to take over the family business and grow the empire.

Rahul goes back home and informs the whole family that Naren is mentally ill and needs treatment, but Pooja impresses Harish and Supriya when she brings him home.

Wednesday 15 January 2019
Episode 10
Kusum is angry at his son Anuj when she sees him with a girl from school called Rachael. Pooja gets an unexpected visit from her aunt and Uncle at the company she supposedly works for.

Thursday 16 January 2019
Episode 11
Naren is back home and it looks like Pooja has done the job she was hired for, Harish is excited that his son is back to his normal self, they throw him a party but Neelima ruins it when she reveals the only thing that always infuriates Naren.

Friday 17 January 2019
Episode 12
Naren is no staying at the Farmhouse, Pooja follows him and tries to take him back home. Rahul is responsible for Naren’s bad behaviour and Pooja is trying to find a way to expose him.

Saturday 18 January 2019
Episode 13
Harish exposes Rahul in front of the whole family – Pooja finds out that she was accusing the wrong man of attacking her all along. Naren is angry at Rahul and is kicked out of the family home.

Sunday 19 January 2019
Episode 14
It’s the grandfathers memorial and because of the family division, there will be three celebrations in separate locations. Pooja finds the cousins fighting and when she stops them, she shares powerful words with them and reunites everyone at the family house.

Monday 20 January 2019
Episode 15
Naren loses his goats to the fire that Neelima started. Pooja almost loses her life and is in hospital recovering.

Tuesday 21 January 2019
Episode 16
Rahul influences Naren to go to a certain gentlemen’s club with him. He calls Harish and tells him the bad decisions his son is making, but Pooja fails to believe that Naren is doing this willingly so goes looking for him.

Wednesday 22 January 2019
Episode 17
Pooja arrives at the club and realises Naren’s intentions are pure. He’s teaching children in the area and parents respect him.

Thursday 23 January 2019
Episode 18
The community thinks Naren and Pooja are married and everyone loves them. This gives Supriya ideas.

Friday 24 January 2019
Episode 19
Pooja’s aunt takes a trip to find out about her secret wedding.

Saturday 25 January 2019
Episode 20
Rahul hires men to kidnap Pooja, but Naren and Mayank go looking for her, finding her fighting for her life.

Sunday 26 January 2019
Episode 21
While Naren and Pooja keep getting closer and spend more time together, Guru manages to convince Harish to fire Pooja and send her back home.

Monday 27 January 2019
Episode 22
Naren is furious with his father for sending Pooja back home. Kusum and Anuj are not happy with Naren’s arrival at their house, they refuse Pooja permission to leave, but in the end, both Pooja and Naren go back to Rishikesh

Tuesday 28 January 2019
Episode 23
Supriya is the only Vyas family member that is filled with so much joy when she sees Naren walk in with Pooja. Guru and Rahul are up to something.

Wednesday 29 January 2019
Episode 24
Anuj feels like Pooja has disowned the family, he gives up on her, instead of her chasing him. She decides to chase Naren and saves him from making bad decisions.

Thursday 30 January 2019
Episode 25
Pooja fails to stop Guru from hypnotising Naren. The Vya’s are embarrassed by Naren’s actions in front of the community. Guru turns the rest of the family against Pooja by deceiving them with false stories. Mayank tells Pooja how he feels about her.

Friday 31 January 2019
Episode 26
Pooja shames her family when the community and her aunt find her in the house feeding Naren. Satish gives Naren the benefit of the doubt and allows him to stay longer, but he ruins his stay by trying to commit suicide