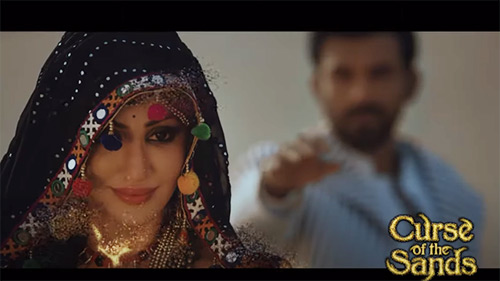 Curse of the sands May teasers 2021: Mohini is determined to keep ram to herself and will go to any lengths…

Curse of the sands full story

Monday 10 May 2021
Episode 1
Siya is heartbroken as her husband Ram wants to divorce her. Later, at Behramgarh fort, Devki looks for Bhairav Singh but is shocked to realise that the witch, Mohini, has killed him and is uncontrollable.

Tuesday 11 May 2021
Episode 2
Siya asks Ram to return to London and that she will send him the signed divorce papers. Next, Devki stops Ram and Siya from entering the Behramgarh Fort and takes them to the palace. At the palace, Ram feels he has lived there before. Mohini learns that Ram is married to Siya and vows to win him over.

Wednesday 12 May 2021
Episode 3
After meeting with an accident, Ram slips into a coma. Mohini warns Devki that if she can’t win Ram over, she won’t let him be anybody else’s either. After being called out by Mohini, Ram wakes up screaming her name.

Thursday 13 May 2021
Episode 4
Siya cries as she signs the divorce papers. Devki reprimands Ram, saying the divorce will send a wrong message to the people of Behramgarh and will also bring shame to the family. Mohini tries entering the palace but is stopped by the divine energy. She later sets Siya’s room ablaze.

Friday 14 May 2021
Episode 5
Mohini tells Devki that Ram seeing her face on a full-moon night will give Mohini complete control of his life and death. Saroj Devi blesses Ram and Siya and ties black bands on their arms. Mohini challenges Devki to stop her from taking Ram away.

Saturday 15 May 2021
Episode 6
At the puja, Mohini challenges Devki that she will take Ram away right under her nose. After she fails n getting close to Ram, Mohini kills the bodyguards.

Ram, compelled to follow a distant voice, reaches Behramgarh Fort and rescues Mohini, unaware of her being a witch. Devki realises that Ram is missing.

Sunday 16 May 2021
Episode 7
Ram brings Mohini to the palace and experiences unexplainable incidents, while visions from the past flash in front of him.

Devki reprimands Ram for bringing Mohini home and tells him that she can’t live with them. Devki asks Mohini to leave, but Siya stops her and convinces Devki to let Mohini stay in the palace.

Monday 17 May 2021
Episode 8
Mohini basks in the success of her plan and vows to destroy the family. As Mohini walks through the palace, visions from her previous life flash in front of her.

Siya and Ram have an emotional conversation. Later at night, Mohini enters Ram’s room and gets close to a sleeping Ram and Siya.

Tuesday 18 May 2021
Episode 9
Siya is shocked to see a shadow floating in the air right above Ram. She gets emotional reminiscing about the wonderful moments spent with Ram and leaves the palace.

Mohini tries to get close to Ram in Siya’s absence. Devki tries to stop an upset Siya from leaving by reminding her of Ram’s love for her.

Wednesday 19 May 2021
Episode 10
Mohini is stunned, while Ram is surprised to see Siya return to the palace. Mohini fumes as Siya gets intimate with Ram. Mohini pushes Siya down the corridor.

As Ram tends to Siya’s wounds, Mohini’s fellow witches remind her of Rajrajeshwari’s 500-year-old curse, according to which Mohini will die if she tries to kill Siya.

Thursday 20 May 2021
Episode 11
A concerned Saroj Devi and Devki discuss safeguarding Ram and Siya from the witch. Devki says that all the secrets of the Sisodiya family are mentioned in an ancestral book, but nobody knows where the book is. Devki suggests preparing Ram for an impending war,

Friday 21 May 2021
Episode 12
Realising that Siya’s life is in danger, Ram orders her to leave. But, an adamant Siya refuses to leave Ram’s side.

A flummoxed Ram speaks to his doctor about having the visions of killing Siya. Siya tries to bring Ram closer to her, and Mohini fumes seeing Siya getting intimate with Ram.

Saturday 22 May 2021
Episode 13
Vivian performs black magic with a handkerchief that has Ram’s blood stains on it. Siya vows to save her marriage from falling apart. Devki compels Ram to take Siya shopping, while the salt place outside the palace makes Mohini immobile.

Sunday 23 May 2021
Episode 14
While shopping, Ram hurts Siya as he puts bangles in her hand. Next, Mohini’s fellow witches pour sand on her and she disappears. Ram punishes himself for hurting Siya, and his blood drops fall on Mohini’s forehead.

Monday 24 May 2021
Episode 15
Devki reprimands Mohini for being irresponsible. Siya tends to Ram’s wounds, but Ram pretends to be indifferent towards Siya’s love and sacrifices. Next, the salt in Sunaina’s bag releases her from Mohini’s spell and she’s shocked to see that Mohini took Devki’s form.

Mohini, dressed as a widow, drinks blood, while Jalebi spots her and informs everyone about it. Later, a tantric performs puja, which hurts Mohini to no end.

Wednesday 26 May 2021
Episode 17
As the tantric performs puja, Mohini experiences tremendous pain. Elsewhere, Siya questions Ram about distancing himself from her. He agrees to be her good, old Ram but puts forth a shocking condition. Devki informs Saroj Devi that Ram is the reincarnation of King Bhanupratap, stunning her.

Thursday 27 May 2021
Episode 18
Devki reveals to Saroj Devi that the witch entered the palace by fulfilling all four conditions of the ancestral book. Siya asks Ram to tell her the real reason why he wishes to divorce her.

Mohini is determined to bring back the vessel of blood before the celestial transit of ‘Rahu Kaal’. Devki realises Mohini’s true intentions.

Friday 28 May 2021
Episode 19
When Vivian accuses Devki of being a witch, Ram slaps him. Devki advises Siya to cook food for Ram which will keep him unharmed from the witch, but Mohini uses black magic to cook food in order to acquire control over Ram’s senses.

Saturday 29 May 2021
Episode 20
During the family lunch, Ram praises the food. Devki assumes that the food was cooked by Siya and asks Ram to kiss the cook’s hand. As Ram agrees to do so, Mohini gives him her hand to kiss. He kisses Mohini’s hand, leaving everyone stunned. He further gifts Mohini a gold ring.

Sunday 30 May 2021
Episode 21
Devki suspects some connection between Mohini and the witch and asks Jalebi to find out the truth. Mohini too asks her fellow witches to keep a hawk’s eye on Devki. Next, Devki meets the tantric, who suggests Siya does the ‘Chhal Bhedan Yajna’.

Monday 31 May 2021
Episode 22
Mohini enters Siya’s room and poisons the ‘ubtan’ given by Devki. Her fellow witches reprimand her as harming Siya would mean more pain for Mohini herself.

Ram slyly throws Siya out of the bathroom and applies the ‘ubtan’ on himself and suffers immense burning sensation. Devki acquires a strand of Mohini’s hair to find out her truth.