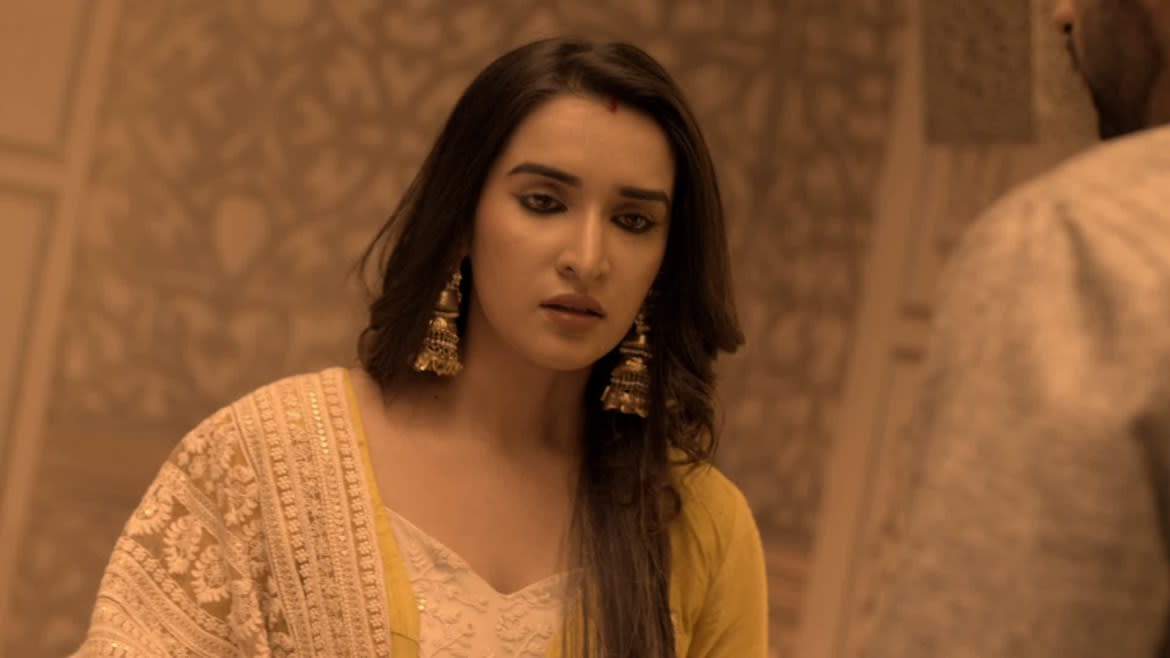 Curse of the sand July teasers 2021:  Siya is building up her strength to defeat Mohini and rescue Mann, will she success or will the witches vendetta consume her?

Siya runs towards dead old tree and tries to water it, but sees it empty. She reminisces puppets discussing a woman’s tears are more powerful and can relive even a tree. Her tears fall on tree and it relives. Mohini holds Siya and says she will be her nazar bhattu hereon and all nazar bhattu’s powers will be transferred into her. Siya agrees as per her plan and walks with Mohini.

Siya thinks if Ram did not regain his memory with dahibhalle, she has one more plan.Siya picks perfume that Ram always gifted and spray on herself hoping his memory will be back smelling the perfume. Vivian discovered Kali is Siya as she was trying to make Ram regain is memory. Vivian try to molest Siya but Vanraj came and killed Vivian.

Siya discovers where Dadimaa and Dayimaa where kept and decides to save them but she has to use Mohini’s black nail to open the door where they were locked in.Mohini decides to be consummate her relationship with Rana.

Vanraj gives Siya chemical bottle hidden in flower basket to pour on Mohini’s black nail so it could fall off.Siya adds Vanraj’s given chemical in Mohini’s ring and keeps it on her dressing table.Mohini picks ring and senses something is wrong and gift Siya to wear it, she wears it and loses one life.

DK gives medicine to Mohini and asks her to mix it in Rana’s alcohol so he will lose his conscience and will not know whom he is spending time with. Siya ask Vanraj for help but he asked her to let it go. Siya promised to save Rana by all cost. Siya opened the big store room and was caught by Devki.

Jhumri comes to Mohini and shows mangalsutra to save her husband, Vanraj, because nothing is going fine between them but Mohini uses her powers and throws her out. Devki cages Jhumri. Siya called Vanraj to come rescue Jhumri.

Siya comes back to haveli and takes care of drunk Ram. She removes his shoes, sits near him and talks to him like Mohini. Ram sees Mohini in her. She feeds him food.
Ram feels restless, Mohini doesn’t find any alcohol. She asks her team to find alcohol. She says don’t know where did scotch bottles disappear. Ram slaps her. He scolds her and calls her useless.

Mohini recalls Ram’s anger and cries. Siya says she has to change Ram to his old self so he can respect women, she seeks help from pandit ji. Siya points a gun at DK and other Chudail to get them to the dark room so she can meet Daima and Ranisa.DK falls beside and breaks the invisible wall. Sia gets shocked seeing Daima’s head caged.

Bindu asks Vanraj to swear that he won’t see any other girl than Jhumri but Jhumri stops him. Siya makes a clever plan to stop Ram from drinking. Ram threatens Siya to tell him the reason Mohini is getting him drink and hurt her in the process.Siya revealed the reason and they both became a team.

Ram asked Siya to drink some wine so she can punish DK and the Chudail. She does as Ram said, Ram makes Siya rest and apologizes to her. DK spies on Siya and tells Mohini the truth about Siya but Siya lied against DK and gained Mohini’s trust. Siya reveals her truth to DK to taunt her.

Vanraj comes to haveli to holding flowers pleads Siya to accept his love and flowers. Rana enters punching Vanraj repeatedly asks who is he. Siya interfered claiming not to know him and shout thief’s but he runs out through the window. Siya twists DK’s hands and warns to dare not reveal her identity and be in her limits, else to be ready to face dire consequences.

Rana draws a sketch of the girl in his memory and asked Siya to look for the girl but the sketch flew in front of Mohini. Siya plans to use DK to locate Dayimaa’s body but couldn’t so she provoke DK so much so she herself takes her to Dayimaa’s body.

Mohini leaves for desert to meet ret ke raja.Ret ke raja says she cannot become human, but if she kills Rana, he can rebirth with new identity and then she can get Rana.Siya followed DK and was locked up in a coffin. Siya in coffin calls Ram for help and reminisces time spent with Ram. Ram reaches there and his memory returns.

Ram rescued Siya and fainted. Siya sees DK tring to burn Dayimaa’s body, rushe to her and stabs her repeatedly saying evil will end today. DK falls dead. Siya informs Dayimaa’s head that she got her body. DK emerges there. Kali is shocked and asks if she is alive. DK says it was her plan to catch her red handed as only Mohini can kill her.

Mohini seduces Rana. Rana pushes her away and used Siya as an excuse. Rana worried about what Mohini will do to Siya sees her enter his room he hugs her.Dayimaa walks to him and hugs him. He tries to push her, but remembers Dayimaa hugging him and murmurs Dayimaa. Siya asks Rana to involve DK in their plans and he agrees.

Siya worried about Mohini as she hasn’t come out of her room goes to check and sees Mohini sitting still like a doll and speaks, but Mohini does not react.Dayimaa cuts her palm to revive her chudail powers.Siya and Dayimaa see Mohini dancing inside a fire circle on Raktacharita…A knife emerges. Mohini picks it and stabs herself.

Rana gets tensed when he does not find Kali around and walks to her room. He is shocked to see Kali unconscious and tries to awake her with all his efforts, thinking why he is worried for Kali so much. Mohini hynotize Rana and was about to stab him when Siya came in and slapped Mohini.

Siya and Dayimaa tortures DK to know where chudail granth/book is. DK says it is behind Mohini’s shadow in her room.They find granth behind mirror,Siya reads that Mohini wants to make Rana an evil by feeding her blood to him.

Mohini standing in living room calls Rana loudly. Rana walks to her and pushing her neck warns to dare not shout at him. She pushes him back and warns him that he is nothing in front of her and not even fit to be her shoes, but she gave him respect and tolerated his nonsense as she loves him, if he does not mind his tongue and stop his nonsense, she will destroy him in seconds.

Rana kills himself in order to make Mohini promise not to use black magic on him.Mohini does black magic and getting her shadow orders it to go and find out who is trying to ruin her happiness. Shadow travels to Rana’s room and see Kali and Rana’s romance returns to Mohini and says she found out who the culprit is.

Dayimaa senses repeatedly someone following her. She walks towards Siya’s room to inform her when shadow throws her on floor and tortures her. Dayimaa notices footsteps and realizes some invisible power is spying on her. Shadow watches Siya’s shadow and informs Mohini that she saw a woman’s shadow in Rana’s room but Dayimaa confused the shadow.

Madira sees Kali and Dayimaa planning against Mohini and warns them that she will expose their truth in front of Mohini. Vanraj walks in jungle. Jhumri follows him thinking to find out whom he loves but he grabs her throat from behind and pierces his nails into her throat.

Mohini calls her shadow Chahya, but when it does not return, she gets tensed and thinks it may be a sign of upcoming problem. Vanraj tries to force himself on Kali and insists to kiss him. Rana sees that and walks away thinking how is that man related to Kali. Kali slaps Vanraj and warns to go away, but Vanraj continues forcing himself on her.

Rana follows Vanraj to jungle.Vanraj grips Rana’s neck from behind. Rana pushes him and says he does not want to fight with him, he just wants to know how is he related to Kali. Vanraj attacks him again. Rana confronts, but Vanraj easily overpowers him and beats him brutally.Mohini shadow was captured and someone is using it against her, without her shadow her powers are incomplete.

Raj Jyotishji’s health deteriorates suddenly and he dies throwing froth from his mouth. Mohini reaches Kog bhavan and doing black magic kills her shadow and thinks now her enemy cannot harm her much. Rana reaches Vanraj and asked how is he related to Kali. Vanraj lies that Siya is his wife and starts emotional blackmail that Kali has gone to Mohini, so he thought of killing Rana to get back his wife.

Mohini provokes her enemy to come in front and fight instead of attacking from behind. Her enemy comes in front acting weirdly. Mohini identifies her as chudail land’s spider and asks how did he escape from there.Rana says he will save Mohini at any cost even if he has to risk his life and asks if there is any way to get inside. Maya says she can send him in, but he can get out only after killing Spider woman and if he fails and get caught, he will be killed. Rana says he is ready.

Spider woman catches Rana and Kali with her usual drama and takes them in front of Mohini. Mohini shouts to leave her Rana and punish her instead. Kali acts as changing her loyaty and pleads Spider woman to free her as she is on her side and not Mohini anymore. Rana asks Mohini if she really wants to give him something, then she should reunite Kali with her husband.

Mohini asks what does he want. Rana says he wants his freedom and he deserves it. Mohini says she needs sometime to think.Rana walks in playing drum with Vanraj. Mohini asks Rana who is he. Rana says Kali’s husband who came to take her back. Vanraj blackmails Siya into agreeing to marry him. Mohini is suspicious of the new event and asked Rana to keep an eye on them.

Mohini walks reminiscing Vanraj’s nervousness and Kali’s hatred for Vanraj and thinks of knowing truth. Vanraj gets injured by a sword and Mohini tasted his blood and realizes he is half human and half animal.She feels severely ill and finds out that she incurred chudail rog via Vanraj’s blood. Siya learns of Vanraj truth and killed him.

Jhumri tries to to reveal Siya truth to Mohini but Vanraj stopped her.Vanraj walks to Kali that fate wants them to unite, so he is alive again.Siya says she will kill him again Vanraj says he will kill Jhumri if she ever tries that. Dayimaa informs Bindu and Kali that she via black magic could not find where Vanraj has kept Jhumri. Bindu asks why Vanraj kidnapped Jhumri. Kali reveals she is Siya, so Vanraj is blackmailing her to marry him by kidnapping Jhumri.