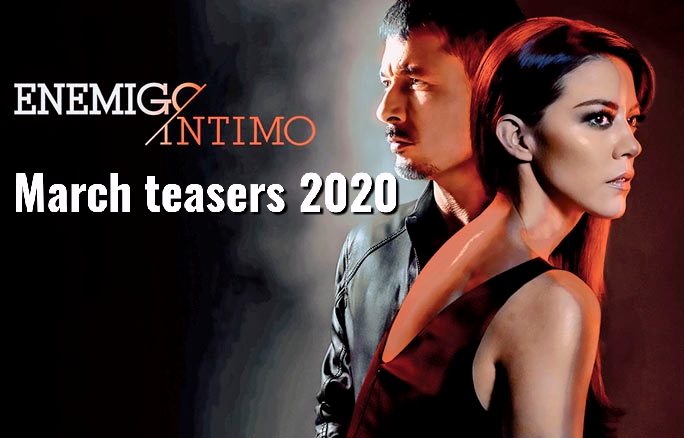 Close enemies March teasers 2020: Olivia and Alejandro join forces to put an end to the Miil Cumbres cartel. The Cartel headed by Roxana, define their new strategy: to move from drug trafficking to diamonds.

Roxana realises that the bomb attack was an attempt on her life. Luis threatens Mendiola, who agrees to release both Roxana and Daniel.

Tuesday 3 March 2020
Roxana has blood tests taken in the infirmary, and asks Clarisa to alter the results. Cordero tells Guillotina’s followers that Guillotina is dead.

Wednesday 4 March 2020
Daniel manages to get rid of Guillotina’s followers after they try to attack him. Roxana tells him that they’ll be released from prison together.

Friday 6 March 2020
Alejandro prepares an operation to rescue the Puenzo family. Guillotina wakes up in the hospital and Eladia tells him that everyone thinks he is dead.

Sunday 8 March 2020
The Mil Cumbres Cartel decides to use the real estate business in Miami to launder money, with the help of Frank, a US Presidential candidate.

Monday 9 March 2020
Roxana and Daniel are committed to building a future together, while Ferrer orders someone to spy on the two of them.

Tuesday 10 March 2020
Guillotina confronts David, and wounds him with a gun. Meanwhile, Alejandro warns Daniel that Roxana is not the woman she claims to be.

Thursday 12 March 2020
Season finale!
Alejandro interrogates Laborde about a shipment of cocaine, but Laborde does not offer any information. Roxana makes a confession to Alejandro

Zoraida and Roxana make a pact: if the head of the inmates kills Guillotina, Rodiles’ contacts will help her to go to jail. Nemesio threatens Madre, for messing with his daughter.

La Cubana commits suicide and dies because of the explosion she prepared, to blow Roxana to pieces and avenge the death of her boyfriend, El Turco. The Buitre attacks Ferrer.

Upon hearing some shots, Alejandro leaves the house of Marimar and realizes that she was seriously injured. Madre looks for Roxana to ask who she really is because she knows that the helicopter that was around the prison tried to take her away. Ochun tells her companions that she heard that they murdered the prison psychologist. Nemesio orders his son to finish the party he organized because he is only interested in ending the captain. Later, Alejandro meets with his companions and Olivia tells him that the person who murdered Marimar was El Buitre one of the most important assassins of the cartel Mil Cumbres. Roxana communicates with her brother to entrust a very special task that allows them to capture the dark once and for all and Bowser learns that his family went to visit him.

After the unexpected attack of El Cholo, Alejandro communicates with the commander to tell him that this guy escaped. After discovering Clariza, sculpting her belongings, Roxana tells her that this will be the last time she will share a cell with her and from now on she will have to treat her with as much respect as possible. Meanwhile, Sergio Olivia arrives at the place where the attack was presented against the police, but while talking to an officer he receives a message warning him to stop investigating what happened. After talking with Daniel, Alejandro tells his boss that apparently he is in love with Roxana and that is why he insists on his innocence by heart and sword. When getting to speak with the director of the jail, Guillotina achieves its intentions.

While Alejandro is responsible for following the car that is moving to Roxana, he realizes that something unexpected happened; due to this the officer communicates with Olivia to tell him what happened and now he needs your help to know his location. Meanwhile in the prison, Bowser tells the director of the Dunes that they are in serious trouble as the inmates are taking control of the prison by orders of Guillotina who is furious at the unexpected departure of his wife. When she reunites with her father and her brother, Roxana feels very moved by the plan they carried out; but she tells them that she does not want things to be that way since she is not willing to be a fugitive; he has many plans to carry out and wants to start reactivating the business of emeralds in Africa.

Luis is in charge of setting up the operation to capture El Turco. Meanwhile, Alejandro asks Sanzon if he remembers what he did to his family thirty years ago and also wants to ask him where his sister is and who were the people with whom to carry out this crime. Roxana communicates with her dad to find out how her brother went and also wants to ask her to talk to Zoraida so that she does not try to do any kind of damage. Clarisa looks for her boss to ask her for a dose of drugs and in return she will give him very important information. Roxana tells Ochún what happened with her boyfriend and also wants to tell her that she no longer has any kind of grudge against her.

The Cartel of the Mil Cumbres and its partners, headed by Roxana, define the new strategy: to move from drug trafficking to diamonds. Daniel faces the Bere Bere. Puenzo kills El Buitre.

Ferrer wants to use Daniel as a bait to catch Rodiles, but Laborde refuses. He tells him that he is not the same anymore. The real estate business will serve the Mil Cumbres Cartel to launder money.

Roxana tells Daniel that he went to do very important business but still can not tell him anything since it is not convenient for him to know everything he does. For his part, Alejandro remembers what he had to live when he was little and wonders where his sister may be. In prison the Puma is again locked in the punishment cell and Eladia offers better conditions in exchange for a little money. Elsewhere, Guillotina begins to improve and thinks about how he can escape from the hospital without being seen by the custodians. Silvia tells Alejandro that she was able to find out that Roxana and Daniel entered with false passports into the United States, which they can use in their favor to catch them once and for all.

After the attack that some officers suffered, Alejandro communicates with Daniel to ask him if he is involved in this matter; but after hanging up this call Daniel realizes that his brother-in-law was watching him. In another place, Guillotina manages to leave the hospital; but when realizing that this subject escaped the custodians call to the captain Ferrer to tell him what happened and because of this, Alejandro is in charge of putting together a plan to capture him. Seeing the news Daniel asks his wife if she was the person who ordered to kill the people who were chasing them. While he drinks, Luis remembers the last conversation he had with his wife and Olivia tells Alejandro that she is not willing to be separated from him again.

Upon discovering that Puenzo cheated on them, the commander told him about the operation they were going to carry out to stop Fermin because they needed his help for this. Meanwhile Olivia manages to get the video from the hotel security camera and realizes that Daniel did not kill his companions; but seeing the tape Alejandro tells everyone that for him this became a traitor. After the talk he had with his girlfriend, Daniel communicates with his dad to tell him that he is fine and hopes that they will see each other soon. When he meets with Roxana, Frank he proposes to help him finance his career as President of the United States. Elsewhere, Guillotina begins to improve and thinks about how he can escape from the hospital without being seen by the custodians.

When faced with Captain Ferrer, Daniel tells him that he is willing to die before giving him information that leads him to find Roxana’s whereabouts; but when he hears this, he tells him that he wants to give him one last chance and for this he needs to know where they are going to put the drug into the United States. Nemesio asks his daughter to leave the ranch since Guillotina can arrive at any time. Alejandro asks Olivia to take charge of getting as many men as possible as he is going to put together an operation to capture the head of the Miil Cumbres cartel. Guillotina gathers its people to tell them about the plan they are going to carry out before entering the Rendón house.

The road to Paradise replaces Close enemies the next day on telemundo.